Various Lightning Aux adapters for the iPhone 7 in the test

Immediately after buying my iPhone 7 Plus, it was basically already clear that sooner or later a Lightning Aux adapter with charging function would have to be found that I could use in the car to listen to music and the iPhone via the car USB To load adapter. It took less than a week and I had the first adapter from OnPrim (a China manufacturer) on the table and a short time later in the car. For a few days things went quite well, but then the message came from the iPhone that the “accessory was not compatible with the iPhone” and that it would not charge the device. This of course restricted the range of functions of the adapter a bit, so that from my point of view it became pointless. You can still use the audio transmission, but the iPhone is no longer charged by the Lightning adapter. 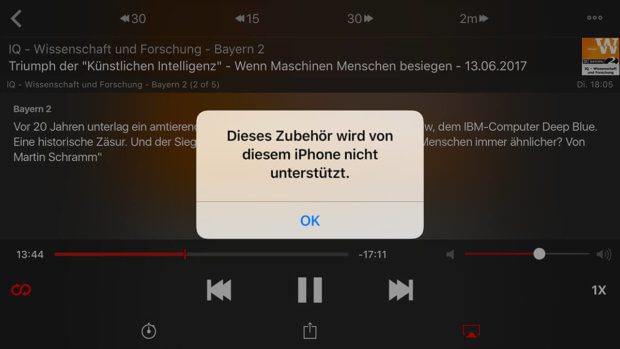 A well-known error message: "This accessory is not supported by this iPhone." ... unfortunately it appears very irregular and is often incomprehensible.

"This accessory is not supported by this iPhone."

After a few weeks, the next adapter came from another Chinese manufacturer, which also worked quite well. Charging works to this day, but the iPhone crashes and restarts about every 10th time it is plugged in. It's rare, but it's very annoying when you're using the navigationApp programmed, selected a podcast and then restarted the iPhone by plugging in the adapter and you have to do everything all over again. So: Not even the yellow part of the egg.

In the test I have a whole handful of different adapters that fit into the Lightning port and offer a Lightning socket and a 3,5mm headphone socket on the other side (Photo: Sir Apfelot).

Stilgut adapter - made in Germany, but also now incompatible

The third attempt was an adapter from StilGut, which did everything as it should until one of the last iOS updates. At some point, however, the message came up with this adapter that it was incompatible with the iPhone. This went hand in hand with an iOS update, which may have changed a little something in the recognition of the adapter. Repeatedly restarting the iPhone and unplugging and plugging in the adapter unfortunately didn't help either, so that I can unfortunately only advise against buying it - even though the Stilgut adapter would have been my favorite a few weeks ago due to the workmanship .

If you are looking for such Lightning adapters on Amazon, you will be surprised that I have so many "failures" when there are so many adapters that have many good customer reviews. All of these adapters are not certified by Apple (as far as I could see) and for this reason can be rejected as "incompatible" by the iPhone at any time. Nevertheless, many of them have good ratings. In my opinion, this has two reasons:

If you look specifically at the 1 star ratings of the adapters on, you can quickly find the problems that exist with the iPhone (source: Amazon).

If you want to take the risk that you might buy an adapter that will become unusable in a while, then you can of course do so. In that case, I would recommend you to look at the 1-star ratings for the selected adapter. It usually says whether users have the same problem as me. However, I would recommend one of the solutions below.

I have just tried all adapters again for 5 to 10 minutes - months after I started this article - and the result is surprising and unsettling at the same time: Some Lightning Aux adapters work for a few minutes and then the error message appears that the adapter is incompatible . One worked for longer than 10 minutes, but you have to be aware that the error message rarely comes directly after plugging it in, but often minutes, but sometimes even days, after the first use.

The Apple Lightning to headphone adapter works reliably, of course, but does not offer a second Lightning input for charging (Photo: Sir Apfelot).

I now have that back in my car Apple Lightning Headphone Adapter in operation when I want to play the audio through my system. Unfortunately, this is no solution if you want to charge the iPhone at the same time.

But there are occasions when you want to tap into the store and music at the same time. In this case, I would tend to use the iPhone as normal Car USB charging adapter to be supplied with power and to realize the music or navigation transmission via Bluetooth adapter. There are some reliable devices like this one from here Logitech, TaoTronics or Sainlogic. If you use this, you only need a car USB adapter that has two USB ports so that you can charge the Bluetooth adapter and the iPhone at the same time. 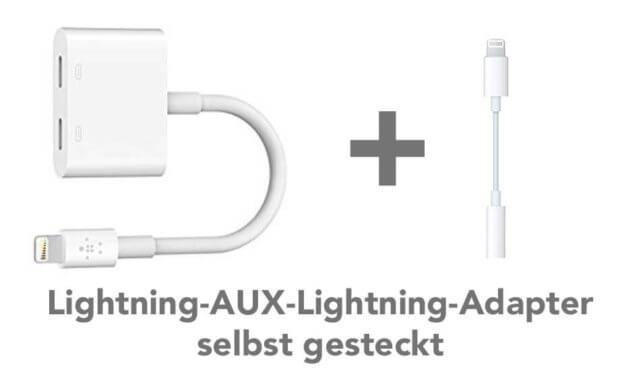 I would like to point out one last way, which is unfortunately quite expensive, but it works. On the one hand you get the Apple Lightning Headphone Adapter and on the other hand the Belkin Rockstar Lightning Splitter. This is also sold by Apple in the store, so you can be sure that it will work with the iPhone 7. If you both plug together, you will also get a Lightning-AUX-Lightning adapter.

AirPods as an alternative

Incidentally, I find myself more and more often using the AirPods (here available promptly for an extra charge). I can reassure people who are concerned that they will block out outside noise. They are stuck in the ear, but they are not in-ear headphones and allow 80-90% of the outside noise to pass through. It is important, however, that you may not be listening to Death Metal at maximum volume, because then even "letting through" the ambient noise does not help. ;)

I hope my little summary of this test and the possible solutions help you further. If you have any comments, I would be happy to hear from you.