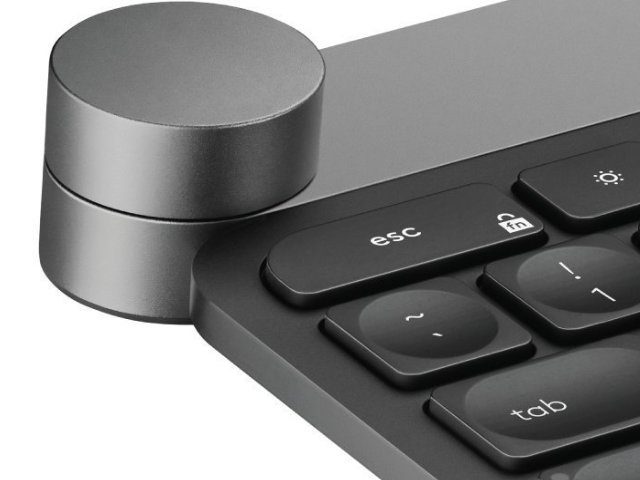 The wireless Logitech Craft keyboard is designed for Apple macOS and Microsoft Windows and, in addition to the regular keys and a number pad, also comes with a rotary knob that fulfills various functions in the system and programs. For example in Photoshop, Word and Spotify you can use the control button of the Logitech Craft Bluetooth keyboard. Multimedia or browser actions can also be controlled - is the wireless keyboard the better touchbar alternative? 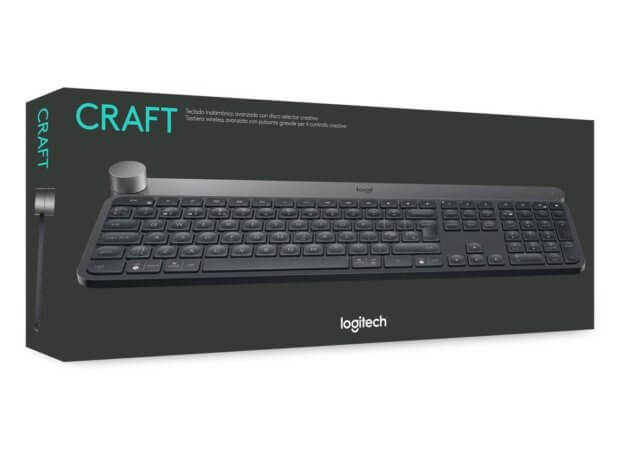 The Logitech Craft is a Bluetooth keyboard for the Apple Mac and Windows PC with rotary control for functions of the system and some apps. Does this have a better workflow than the MacBook Pro's touch bar?

The wireless keyboard, which Logitech has equipped with a multifunctional button, is currently available for EUR 199 (as of January 2018). This can not only be rotated clockwise or counterclockwise, but also reacts to typing and pressing. Context-specific functions in an app or general features in the system can be called up. In addition, individual functions can be assigned to the individual actions - as a replacement for key combinations or trackpad gestures, so to speak. This happens in the Logitech software "Logitech Options", with which you can also configure other hardware from the manufacturer under macOS on the Apple Mac, iMac and MacBook.

Here I have summarized the most important data of the keyboard for you, so that you can get a comprehensive picture:

At Amazon you can order the Logitech Craft via Prime and use it to try out the 199-euro keyboard with the rotary knob for pressure and gestures as quickly as possible. Incidentally, the keys should have a different feel than those of the Apple keyboards, but you should be able to get used to them quickly.

Wireless Logi keyboard with rotary knob
The Logitech Craft wireless keyboard with rotary knob provides functions for various programs such as Photoshop, Word as well as the Apple macOS and Microsoft Windows systems. Access master slides in PowerPoint, charts in Excel, and more. Backlight of the buttons and charging of the battery via USB-C.
132,49 EUR
Buy it at Amazon Price includes VAT, plus shipping costs (updated: 18.01.2022 at 11: 30 clock)

How exactly does the rotary switch work?

Logitech shows three functions for the dial of the Craft keyboard that you can use to navigate in different programs:

Which apps is the Craft compatible with?

According to Logitech, the Craft keyboard also and especially works with the Adobe programs Photoshop CC, Illustrator CC, InDesign CC, Premiere Pro CC and the Microsoft Office apps Word, Excel and PowerPoint. Further details on using the wireless keyboard can be found on the manufacturer's support page, which I have linked to you above.

You can use the multifunction wheel on the keyboard to control a number of functions in various apps. Especially if you prefer to work with an external keyboard on the MacBook Pro anyway or if you have set it higher - on a laptop arm, for example - then the operation is the best Touch bar rather counterproductive. It is more difficult to reach and sometimes not as easy to see if the Apple laptop is not directly in front of you. Therefore, the rotary control of the Logitech Craft is a useful replacement for quickly accessing functions in various apps without a mouse. Of course, there are also negative points: the functions and features are shown on the display, which covers the work surface - and there is also a lack of comprehensive graphical representation (symbols on the touch bar).

I haven't tried the Logitech Craft myself yet; but if someone from Logitech is reading along, then write a mail regarding a test product;) But I can well imagine that the Bluetooth keyboard accelerates the workflow a lot and is a clear advantage, especially for Mac and MacBook users. I use the Logitech Options software myself to define settings for the Logitech T651 (trackpad alternative). It's quick and everything is explained in the app so that you can start working intuitively. I assume that this is also the case with the keyboard.