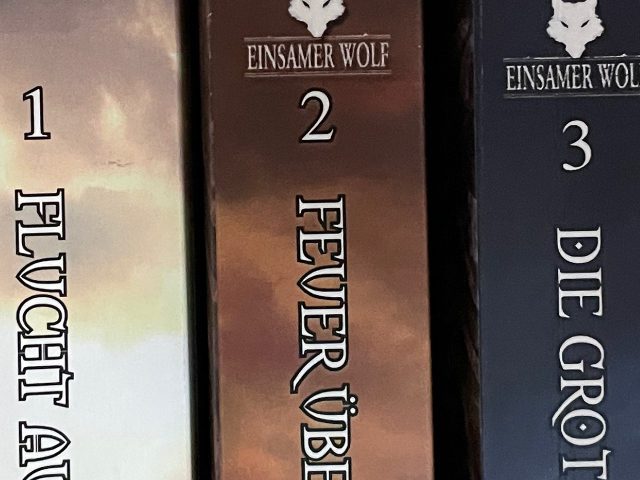 You may be familiar with the gameplay of so-called pen-and-paper games from “Dungeons and Dragons” or “The Black Eye”. These are role-playing games in which the participants each play a fictitious character and the game master specifies the game world, its characters and the story. If you don't currently have a pen and paper circle or don't want to start one because of the coronavirus pandemic but still want to delve into this world, my tip is the Lone Wolf book series by Joe Dever. The playbooks for one person are mine Pick of the week.

Abbreviation: You can find the various volumes here 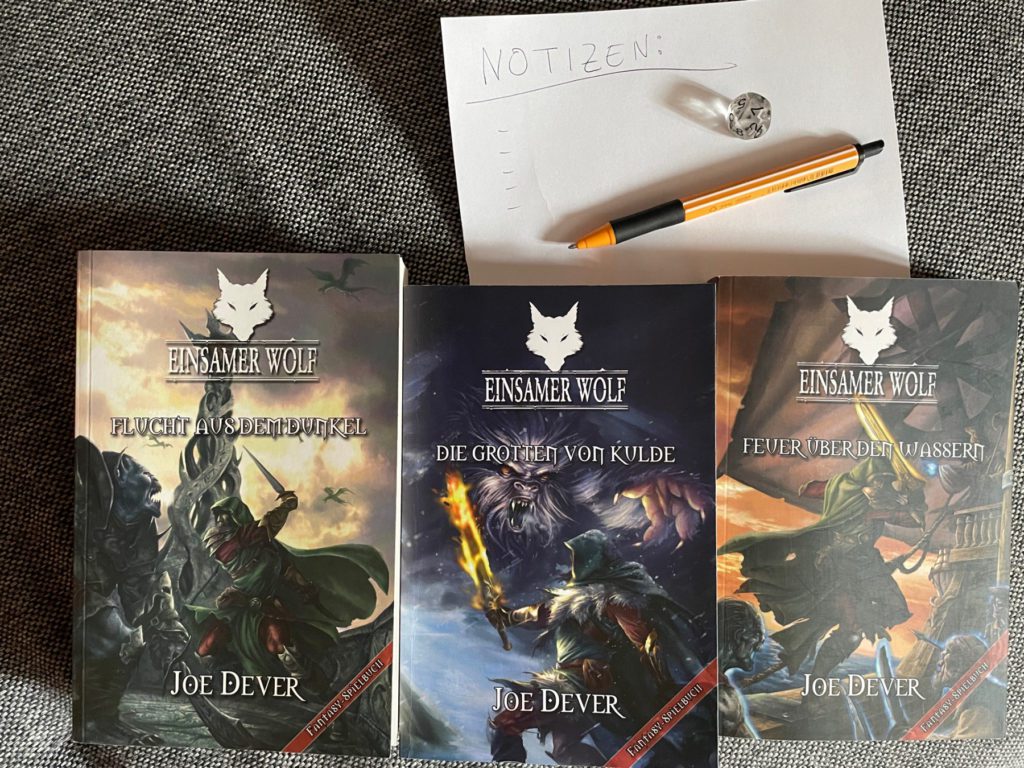 The "Lonely Wolf" playbooks, a pen and paper - that's all you really need to set off on an adventure. You can read why I recommend a ten-sided dice in this post.

The story of your character in these books, of which there are several volumes for numerous hours or days of escapism, takes place in a classic fantasy setting. Of course you play as a gifted and magically talented person. Because it is important to compete against strong opponents and supernatural beings in order to protect the kingdom from dark forces. What sounds generic can come up with many individual components over the course of history. At Amazon you can get the "Einsamer Wolf" volumes new, used, as Kindle eBooks and free of charge in Kindle Unlimited subscription.

The stories build on each other

When buying and playing the books, it is beneficial to play them in the numbered order. Because the first volume offers the best introduction, and the other volumes are designed to develop the story further, increase skills and collect special items. Because the weapons, amulets, armor, potions and everything else that you find in a book and do not use up, you can take with you on the next adventure. In addition, the experience points received are used to move up in certain ranks and to acquire new skills. The higher ranks ensure that certain actions are easier, attacks are more effective or other things are influenced. 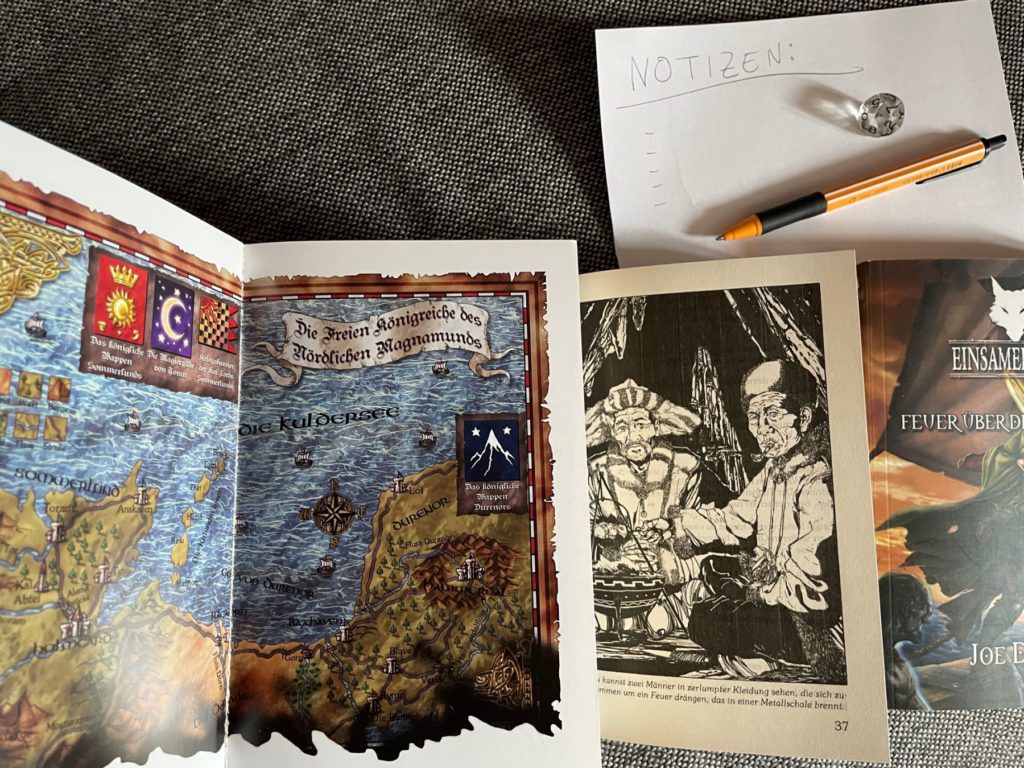 A map, numerous illustrations and other aids, which make the story clear, ensure a certain immersion. The pen-and-paper role-playing game can also be fun on your own.

Lone Wolf - Can also be played with several people

But of course you don't have to deal with the books alone. If you want to play them together, you can of course. Either you decide together on the path to go or one person gives the game master (reads the story and gives the options for making decisions) and the other person plays as the character, the lone wolf. Maybe this possibility of using it is something for you if you are looking for a new game for your children. In addition to the book (s), you basically only need paper and a pen. 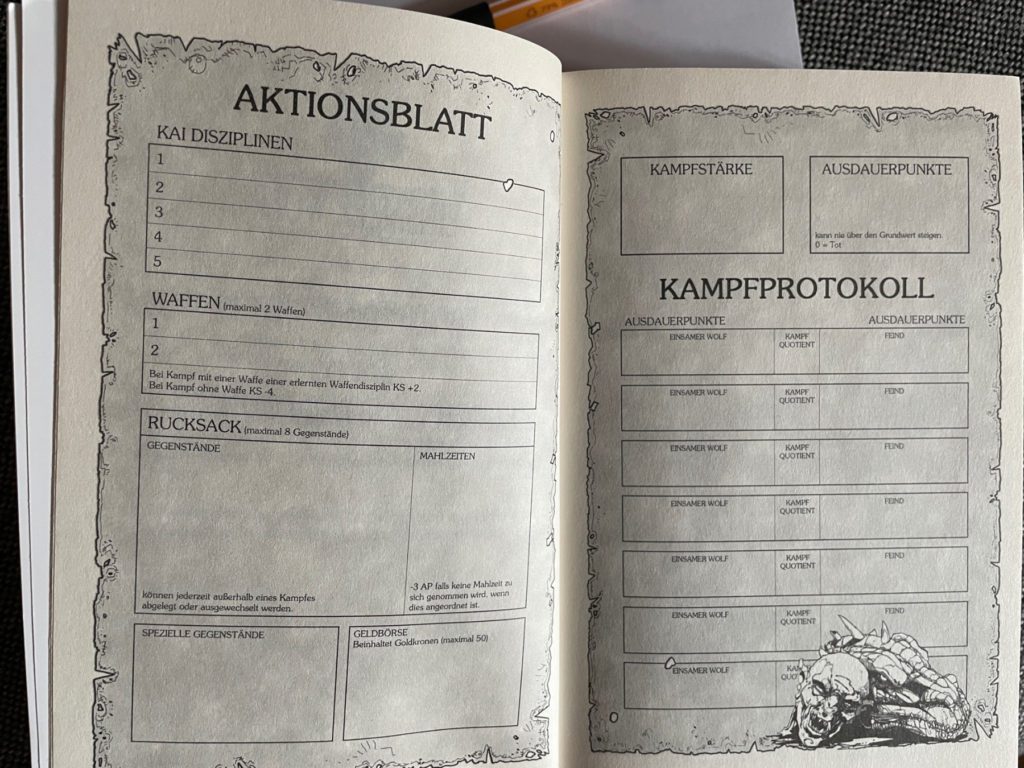 Regardless of whether you are alone or with several people: It is best to copy this game sheet onto a separate piece of paper. Otherwise there is not enough space on the A5 pages due to numerous adjustments and corrections during the game.

My tip for playing: use W10 instead of a table of numbers

Especially when it comes to a fight in the story, certain values ​​have to be rolled. A table shows how the values ​​of the attacking and those of the lone wolf have to be put in relation. The outcome of combat rounds is then determined with a table of random numbers. In this table, which you should tap with your eyes closed, there are the numbers 0 to 9. However, I found it much more convenient to use one instead of the random table when playing ten sided dice, a so-called W10 or D10. It also has the numbers 0 to 9 and you are not tempted to always point to the same place for a positive outcome of the fight. 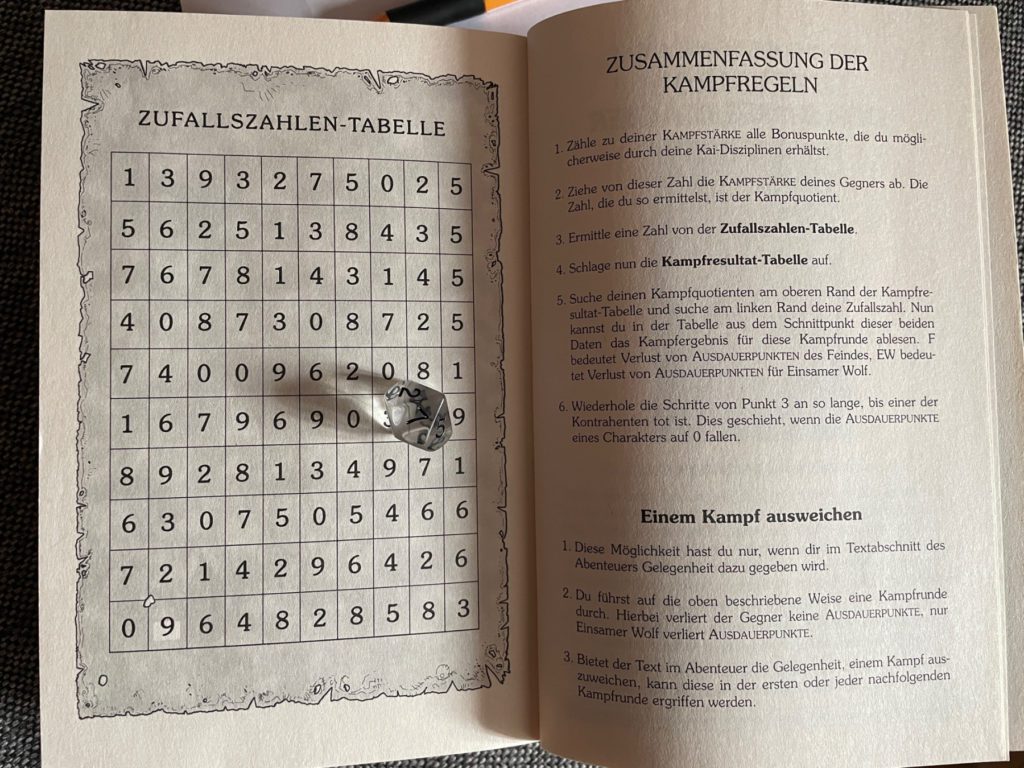 You need this table for random decisions or for rounds of combat. But I think it makes sense to replace it with a D10 die. So you don't always have to scroll back and forth.

The new Kai Krieger as a continuation

The "Lonely Wolf" series offers 20 volumes full of adventure, journeys through kingdoms, encounters with interesting characters and turn-based combat. If you've actually worked your way through this pool of fantasy ideas and still haven't had enough, then of course you can continue. Also by Joe Dever comes the sequel to Lonely Wolf, which is called "The New Kai Warriors". Here you do not continue to play as the same character leveled up in the last 20 volumes, but as a student of the same. So it is important to build up skills again and to prove yourself in adventures in order to get better. Otherwise it would be boring: D