Loupedeck: Mixing console tool for image processing with Lightroom from 2017 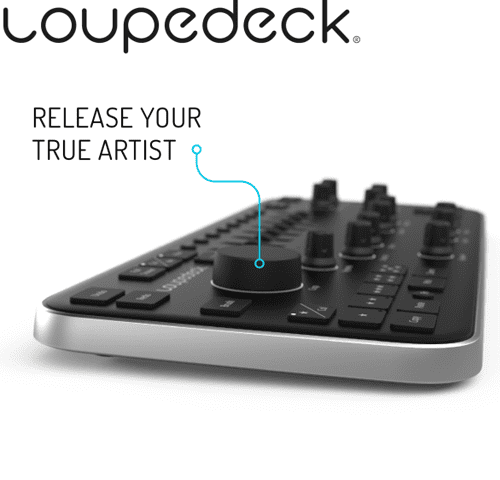 About Indiegogo is going on loud deck funded, one developed in Finland Image processing hardwarethat one mixer looks not dissimilar. The team, which partly consists of former Nokia employees, wants Loupedeck 2017 for users of Lightroom and possibly Photoshop (and hopefully also for other programs like the Serif Affinity range) to offer. Here I have summarized data and facts about the - in my opinion - ingenious device.

The Loupedeck is supposed to make photo editing in Lightroom on Mac and PC even easier. You can get involved as early birds via Indiegogo.

Loupedeck - Image processing in Lightroom via mixer from 2017

"Loupedeck ™, the photo editing console for Lightroom ™: it takes your photo editing to the next level. It makes your editing faster, improves ergonomics and above all, it makes you more creative and more focused on the photo.“So the product will be on Indiegogo touted. In addition, the operation should be intuitive, which seems quite logical, since each button and each controller has its own task. I find the controls for the color levels particularly innovative. What can be very awkward with the mouse and keyboard can be implemented more quickly and easily with the Loupedeck - prognostically speaking.

The funding target for the Loupedeck on Indiegogo was set at € 75.000. The fact that € 312.830, or in other words: 417% of the estimated amount, has now been raised shows that Lightroom users want this mixer for photo editing. The good thing about it: there are so-called “stretch goals”, i.e. development steps that are initiated or implemented when higher sums are reached. For example, by reaching € 200.000, storage bags for the Loupedecks are being manufactured and delivered - for all those who secure such a device via Indiegogo. 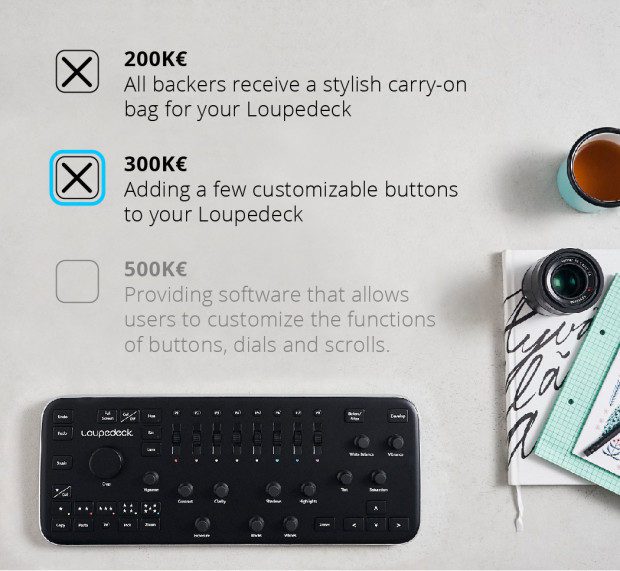 Thanks to cracking the € 300.000 mark, the Loupedeck gets a few additional buttons that can be programmed by the user. If the mark of half a million euros is reached, the team also develops suitable software that allows (all) buttons and controls to be adjusted.

I think it's good and right that such innovative products can be realized via platforms like Indiegogo - and so that users get exactly what they want. However, I find it a bit unfortunate with this particular project that the possibility of fully personalizing the device requires a funding target of 666,67%. Not because of the number that does not fit the Christmas season, but because of their relatively "overfunded" amount. I think that an individual workflow was the goal of the project and therefore the complete personalization of the device should have been the focus from the outset.

Loupedeck: Plug and Play for Mac and PC - but only with Lightroom?

The use of the Loupedeck module should be very easy and intuitive. Simply plug it into the Mac or MacBook or into the PC or laptop via USB and off you go. Unfortunately, it is becoming apparent that the development of the device is only designed for Lightroom. Another point of criticism for me, because I like to work with Photoshop and I am also not averse to Affinity Photo. Nevertheless, if you want to edit your photos above all, you will surely have fun with Loupedeck:

Incidentally, a corresponding question on Indiegogo was answered to the effect that Loupedeck is only being developed for Lightroom. That was 11 days ago - in today's technology age, that is many days for developers and manufacturers to think about. Therefore, I once again made a request to the team behind Loupedeck and asked about Photoshop, Affinity Photo and general application in the system (also for text editing). As soon as an answer comes in, I will provide an appropriate update here!

Features of the Lightroom mixer at a glance 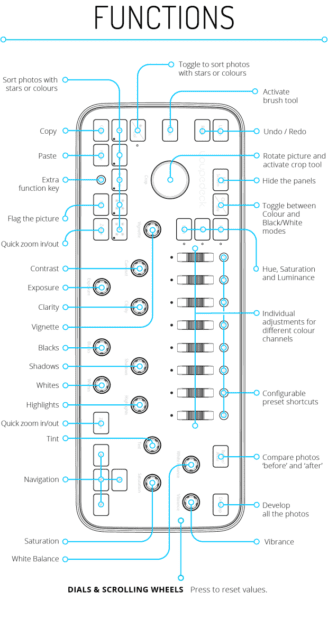 The Loupedeck functions in Lightroom at a glance. (Click to enlarge) Image source: indiegogo.com

Conclusion on the Loupedeck

The Loupedeck, which will be launched in 2017 is intended to simplify photo editing on Mac and PC. The first demo looks pretty good; the device seems very sophisticated. I would very much like to edit pictures with this mixer, but I don't (currently) use Lightroom. I hope that the developers still have some understanding in this regard. However, I almost expect that this will not happen and that only version 2.0 will bring more extensive functionality - just marketing ...;)