Loupedeck + - New console for image editing on Mac and PC 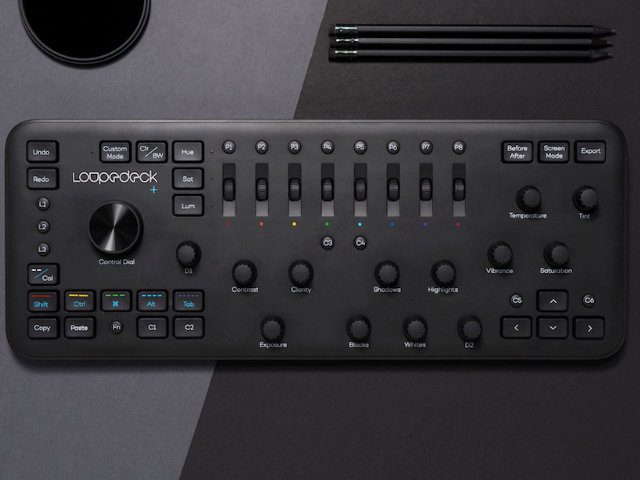 The Finnish company Loupedeck recently officially presented the second version of the image editing console of the same name and published details on features and compatibility. In the following I have summarized information and data about the Loupedeck +, Loupedeck Plus or some devices called Loupedeck 2. This could be interesting for everyone who works with Adobe Lightroom and / or Skylum Aurora HDR and Skylum Luminar. If you want to have a look at the first version of the video mixer for comparison, I recommend the one here Loupedeck test and experience report.

The Loupedeck + or Loupedeck Plus is the second console for image processing from the Finnish manufacturer of the same name. Buttons, buttons and controls are used for simple, fast and intuitive photo editing.

Hardware update after one year: the Loupedeck +

One year after the market launch of the first Loupedeck, which is intended for a simpler, more intuitive operation of Adobe Lightroom, the second version has now been launched. The Loupedeck + or Loupedeck Plus is also compatible on the Apple Mac under macOS and on the PC with Windows with Adobe Lightroom - but also with Skylum Aurora HDR and in the future with other apps. Many functions have been improved with feedback from (semi-) professional and hobby users in the back of their minds. In addition, the buttons, controls and buttons now offer more individual adjustments for the user.

Comparison with the first version

According to Loupedeck, a company of photo enthusiasts and former Nokia developers that crowdfunded the first device (with outstanding target surpassing), the Loupedeck + has the following improvements:

You can use the Loupedeck Plus, among other things Buy at Amazon. On the product page you can find more information - for example that there is currently a beta integration for Capture One from developer Phase One in addition to compatibility with the aforementioned apps. If you have already been able to test the Loupedeck +, please leave a comment with your experiences!

Second version of the image editing console
The Loupedeck + / Loupedeck Plus is made for Adobe Lightroom Classic CC and Skylum Aurora HDR, as well as equipped with a beta integration for Capture One. Intended for professional photographers and amateurs alike.
239,00 EUR
Buy it at Amazon Price includes VAT, plus shipping costs (updated: 25.05.2022 at 05: 30 clock)

Statements from the company

"We know how committed both professional and amateur photographers are and we want to help them make their work not only easier, but also more productive," said Mikko Kesti, founder and CEO of Loupedeck, in the press release on the new device. “For us, there is no better way than to get feedback directly from users and heed it. By adding more control, efficiency and customization options to the editing process, we can better support photographers in their work. "

Skylum (formerly Macphun) has been developing not only image and photo editing software for macOS on the Apple Mac for some time, but also for the PC with Windows since the last Luminar version. Probably as a result of this, there was a cooperation between the company from Helsinki and the developers at Skylum when developing the Loupedeck +. This is why the Aurora and Luminar apps are now also supported.

“Skylum and Loupedeck share the same vision. We want to help photographers create great photos - in a new way, ”said Alex Tsepko, CEO of Skylum, in the press release mentioned above. “When I discovered that there was going to be a new Loupedeck, I knew that Skylum should be the first software to be supported. That's the kind of innovation that modern photographers really need. "

After the market launch of the first Loupedeck version, there was criticism from some quarters of the exclusive compatibility, which is now being broken with the Loupedeck Plus. Among other things, the manufacturer announces that not only does the above-mentioned cooperation exist and that compatibility with Capture One will soon be complete, but that further software applications will be added to the program in the course of 2018. Exactly which apps for image processing or photo editing (or for other industries, e.g. music) are involved were not disclosed. Sounds good, but you already have that Loupe deck 1? Then you can auf dieser seite secure a cashback.

Conclusion on the Loupedeck +

With the new Loupedeck Plus, the manufacturer from Finland is responding to criticism and suggestions for improvement from users, thus showing that the focus is actually on practical benefits for the user. It remains to be seen whether there will be a software update for the first console from 2017 so that it can also be opened for other apps and programs. If you are dealing with the topic of the "mixer for image processing" for the first time, you should probably recommend the new model - a test will be provided if the purchase or receipt of a sponsored model results;)