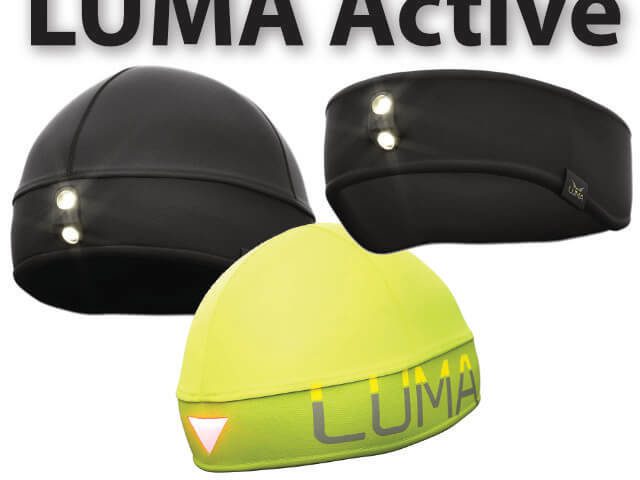 The LUMA Active hat and the LUMA Active headband are equipped with a combination of polyamide microfibre and elastane as well as with LED light on the front and back. Started in 2015 as a Kickstarter project, equipment for night sports enthusiasts and winter joggers has been available from Amazon for some time. Since it fits in well with the season, I would like to bring you closer to both products in this blog post. In addition to cheap alternatives, I have a book tip at the end for those who prefer to read sports rather than exercise themselves;)

The LUMA Active light cap and the headband with LED light are ideal for night sports and outdoor sports in autumn and winter. The lights can be easily removed from the cap and ribbon and exchanged. Images: Amazon

The LUMA Active products come in the right size and color to match the other outfit. For example, the Cap for sports at night or in autumn and winter not only buy in black, but also in purple, blue and yellowish green. The latter is particularly helpful in order not to be overlooked by drivers or other road users in the dark. In addition, there are of course the LED lamps in white (front) and red (rear). The front LED light offers three levels for near and far. The rear light can be operated with steady light or flashing. The same applies to the LUMA Active HEADBAND.

LED hat for safe walking
The LUMA Active hat with LED light is ideal for night sports enthusiasts and joggers who want to keep an eye on the path in autumn and winter. The red rear light also offers more safety.
Buy it at Amazon Price includes VAT, plus shipping costs (updated: 17.09.2022 at 00: 46 clock)

LED headband for outdoor sports
The LUMA Active headband also makes outdoor sports safer in the dark. The LED lights can also be exchanged between the products, so buying in a set is a good idea.
Buy it at Amazon Price includes VAT, plus shipping costs (updated: 17.09.2022 at 00: 46 clock)

Install LED and remove it for washing (video)

Hereinafter Video LUMA Active shows how easily the LED lights can be integrated into headgear. You can just as easily take them out again to charge the battery and / or wash the hat or headband:

The operator already had one on the “LaufeninDortmund” channel a year ago Review published on the light cap. From 0:39 there is not only an unboxing, but also recordings from the LUMA Active test. This shows (at 2:51), among other things, how well the path in front of you is illuminated with the LUMA Active hat:

Since not everyone would like to spend 99,00 euros on a hat with a light, I have also selected a few alternatives for you. These are perhaps less suitable for sport, but are more for the early morning commute, for the night shift or similar applications:

There is even more information about the products and the company behind them at official website of Luma Enlite GmbH from Austria. On a separate subpage there are also a few interesting videos that show the handling and use of the light cap and light headband. In the news area you will also find a blog with interesting articles. So if you are not only interested in running in the dark, but also in companies that make it safer, then you are in good hands on the Luma Enlite website;)

Book tip: Confessions of a night sportsman by Wigald Boning

Wigald Boning is an exceptional entertainer and specialist in many areas. Correspondingly entertaining are his books, in which he tells of his eventful life, from entertaining to ludicrous. One of them is from 2006 and is called "Confessions of a Night Sportsman". Fittingly, it came back to my mind when I dealt with the LUMA Active products. Therefore, here is the corresponding reading recommendation;)

Confessions of a Night Sportsman
Whether running races, mountain biking or working hard in a pedal boat - Wigald Boning describes all that and much more in this amusing work.
9,99 EUR
Buy it at Amazon Price includes VAT, plus shipping costs (updated: 17.09.2022 at 00: 46 clock)