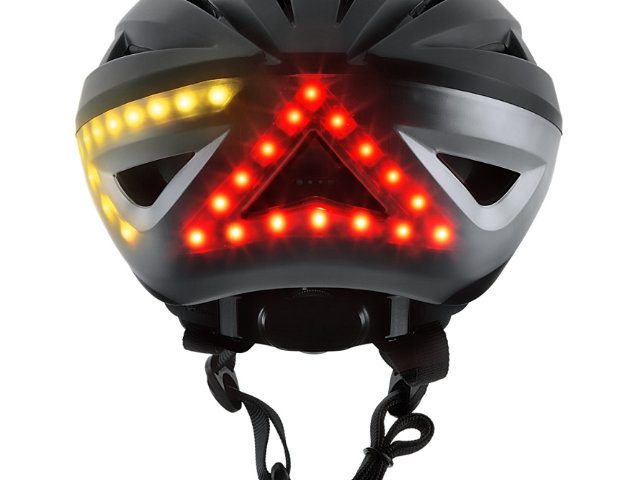 The Lumos Smart Bike Helmet is a bicycle helmet that combines lights, indicators, brake signals and safety for the head. But it is not only useful as a helmet for cyclists and thus for the integrity of the head, but also as a light, taillight and indicator. For the latter function, simply attach a button with a left and right button to the handlebar. In addition to these great functions, the smart helmet can also be linked to the Apple iPhone and Apple Watch via the iOS app. Among others, Apple itself sells the smart bike accessories in its shop.

Disclaimer: The Lumos Smart Bike Helmet is not a replacement for the lamp and the rear light on the bike and may only be used in Germany to support them.

The Lumos Smart Bike Helmet is a smart bike helmet with lights and indicators that is compatible with Apple iPhone and Watch and can therefore perform numerous functions.

According to the product page in the Apple online shop The Lumos Smart Bike Helmet has already won several international design awards. In addition to the appearance, the function of the bicycle helmet is of course to be emphasized. Numerous bright LED lights can be activated for the lighting and the signals for the car or cyclist behind you:

On the Lumos Smart Bike Helmet product page, Apple writes, among other things, the following about the smart bike helmet with lights and indicators:

The Lumos Smart Bike Helmet is the first bicycle helmet that combines light, turning and braking signals, iOS app and helmet into a coherent whole. With its super bright LEDs at the front and rear, the Lumos takes your bike lights to a higher level so that you are easier to see on the road.

In addition, the following technical data is shown:

Have a look here: SmartHalo bike computer with GPS, lights, fitness and alarm

The Lumos Helmet App provides you with information on the battery in the bike helmet and the battery in the control unit on the handlebar, among other things. This is useful because you are protected from surprises due to functions that suddenly fail. You can also use the app to track your routes and display them on maps, synchronize your fitness data with the Apple Health app and much more.

The app described for extensive use of the Lumos Smart Bike Helmet is also compatible with the Apple Watch and, thanks to smart algorithms, should recognize when you want to turn. Sure, most people wear the watch on one of their two wrists - a hand signal to turn can be clearly seen there. But the question arises as to how the signal from the other hand for turning to the corresponding other side is recognized ... I would therefore probably rather use the handlebar accessories to clearly flash the helmet.

The helmet is also available on Amazon with pretty good ratings on average - and not only in black, but also in yellow. The price at Amazon is 179,99 EUR, which is 4 cents more expensive than at Apple. In addition to the customer reviews, you will also find some interesting customer questions and answers on the linked product page. For example, you learn that you cannot replace the battery in the Lumos Smart Bike Helmet.