I've been an avid user of the App flat rate "Setapp". Why? Because I can always discover and try out new apps there without feeling that they cost me "more" because I pay my fixed annual fee anyway. Among these apps I always find special "delicacies", such as the Mac software "Prizmo 3", which performs OCR on existing photos and scans. This means that text documents that have been photographed can be converted into real text files in no time at all.

In einem older post I have already discussed a few apps for optical text recognition (OCR) on the Mac. I still have the app there "Easy Screen OCR"Praised, which I installed and tried out at the time. The software is small, has hardly any features, but does its job. For this reason, it was a recommendable helper for me on the Mac. In the meantime, however, the developers of Easy Screen OCR are on a Switched to the subscription model that costs 9 euros a month.

To be honest, I cannot understand this price. For this amount I can "Setapp"Book and get in addition to the much better app" Prizmo "also over 100 other apps, most of which are very helpful Mac apps. It should be clear how you decide and the developers of Easy Screen OCR shouldn't wonder ... 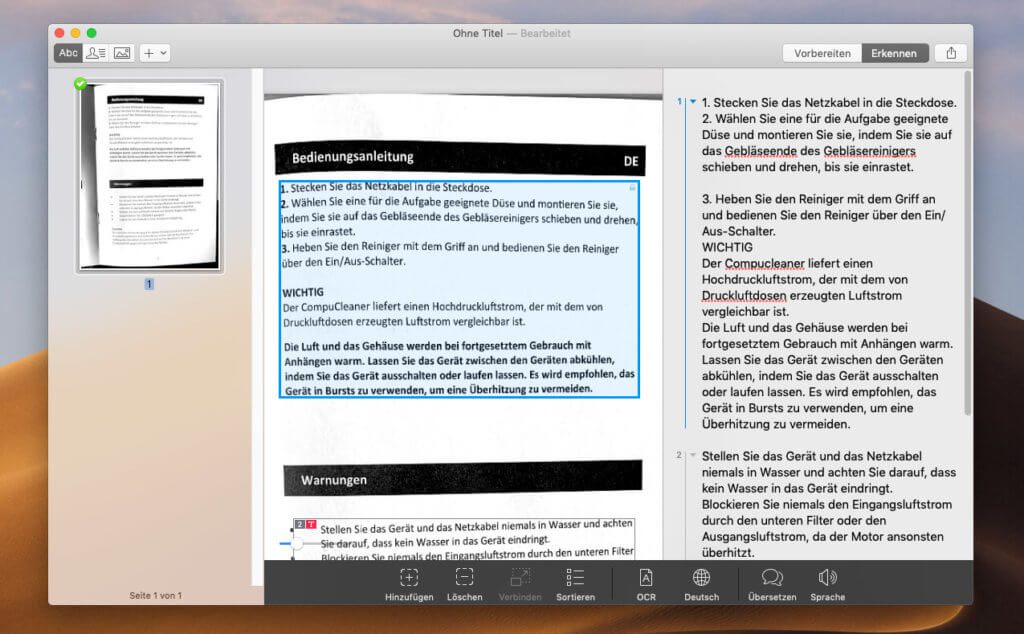 During processing you can see the recognized text blocks in the middle and the OCR result on the right.

What I like very much about Prizmo is the user interface, which is clearly structured and takes the user by the hand from importing the scan as a photo, screenshot or other graphic to outputting the text with correction in the appropriate language.

What I think is particularly nice: You can drag and drop photos directly from the Mac's photo library into the Prizmo window and they are automatically imported. There is also the option of creating photos directly with the iPhone without going through the photo library. You start an option "Create photos with the iPhone" on the Mac. The camera app then opens on the iPhone and the desired documents are photographed. These photos then land immediately in Prizmo and you can work with them. It couldn't be easier or faster.

With the extensions of Prizmo you can run text recognition directly in Apple Mail on image files in a mail.

Prizmo also supports the macOS features Continuity and Handoff and even offers the option of translating the recognized texts into another language or of having them read to you.

And (for everyone who would like to ask): Yes, with Prizmo you can also import a batch of photos with photographed pages and run text recognition over all documents in one go.

My use case: OCR on screenshots or photos

I don't use Prizmo very often, but when it comes to use I'm glad I have it on my hard drive as a helper. I use it, among other things, to do text recognition on iPad screenshots so that I can read texts from magazines Readly app than get real texts in my Mac.

I also use Prizmo to get the text of a book from a photo for reviews, for example. I had it for them just yesterday Presentation of the iPad teacher's manual in use because I wanted to include a short quote from the blurb in the post, but I didn't want to retype the text. 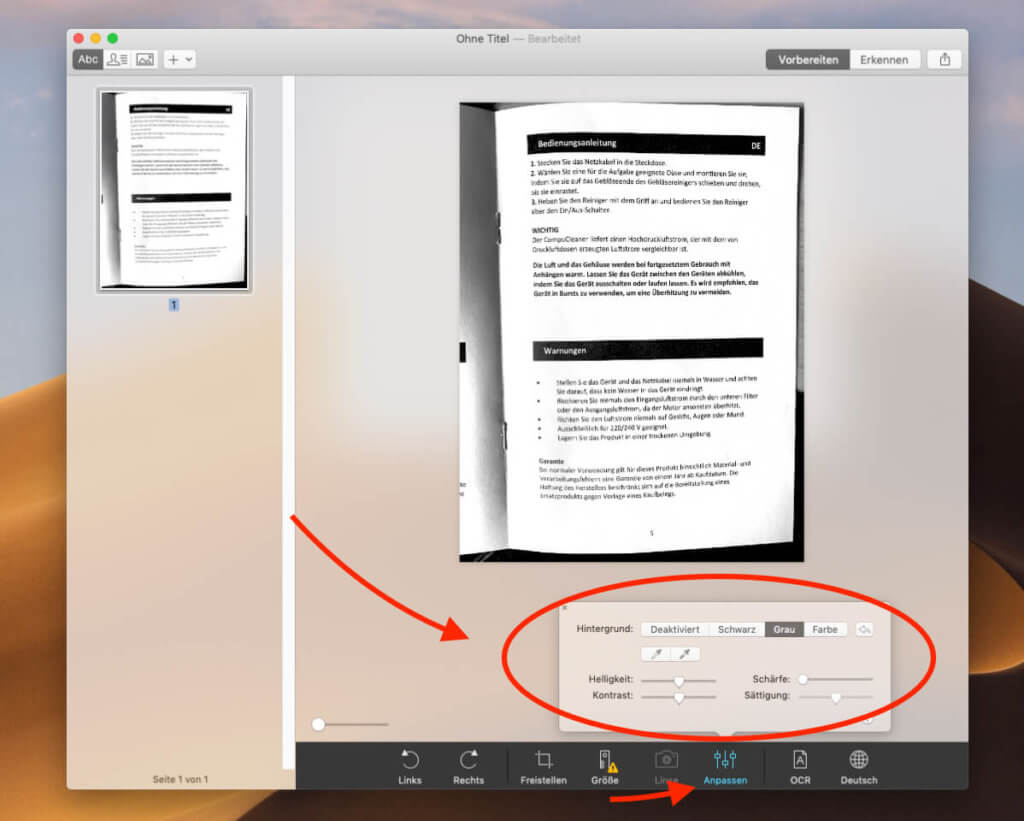 You can use the "Customize" button to make some settings so that the image file is better prepared for OCR processing. As a rule, however, this is not necessary.

So far, I haven't been able to find any negative points during detection. Of course, here and there a point becomes a comma or an "over" becomes a "dear". But that happens very rarely and of course depends on the quality of the source material.

It is important that you specify the appropriate language for the document, otherwise Prizmo will try to recognize an English sentence in scanned German words. Of course, that makes for a lot of nonsense due to the auto-correction.

If you have imported the correct language and the document in sufficient resolution, you can use Prizmo to edit the original image with brightness and contrast to make the software's work easier. In most cases, however, this is not necessary. It is also important to set the resolution to "4x" in the "OCR" button if he complains that the resolution of the document is too low. 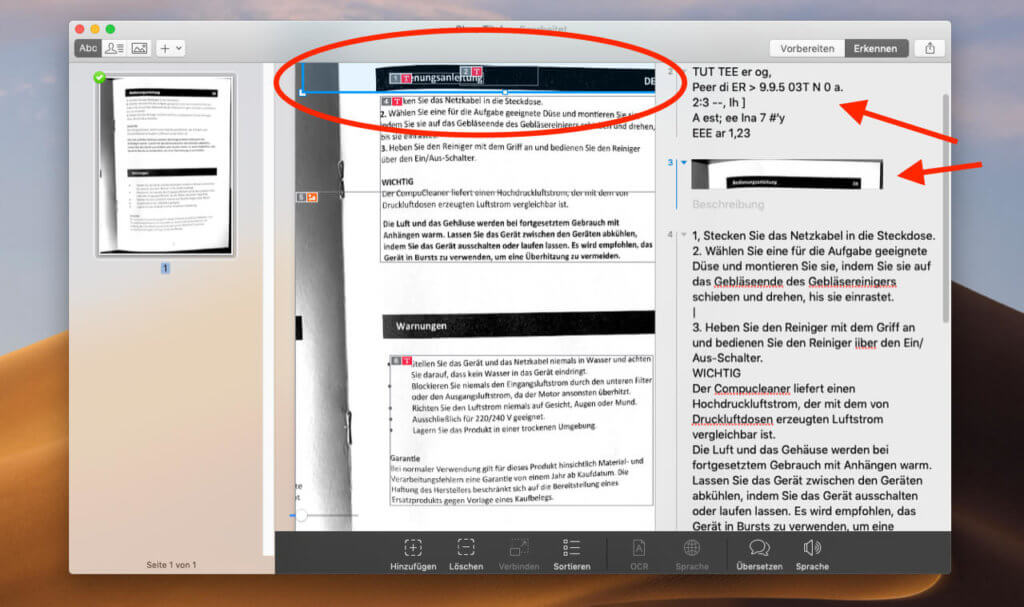 With some documents you have to delete unimportant text blocks that are interpreted as graphics or gibberish, for example.

The next step is to run an automatic recognition of text blocks, which is particularly useful for text with several columns. Here you may have to correct the order of the blocks again, as Prizmo often does not know in which order the text should come one after the other in magazines with a super fancy layout. But here too, working with the program is as easy as usual - as you are used to with a Mac.

Prizmo's export options are also diverse and extend to PDF, which Spotlight can index.

My conclusion: OCR on the Mac? Prizmo!

I don't often need OCR programs for the Mac because I don't have to run OCR over documents all the time. I still write most of the texts by hand and keyboard, but every now and then I make life a little easier with Prizmo. From my point of view, you don't need any additional OCR software when you have Prizmo at the start. 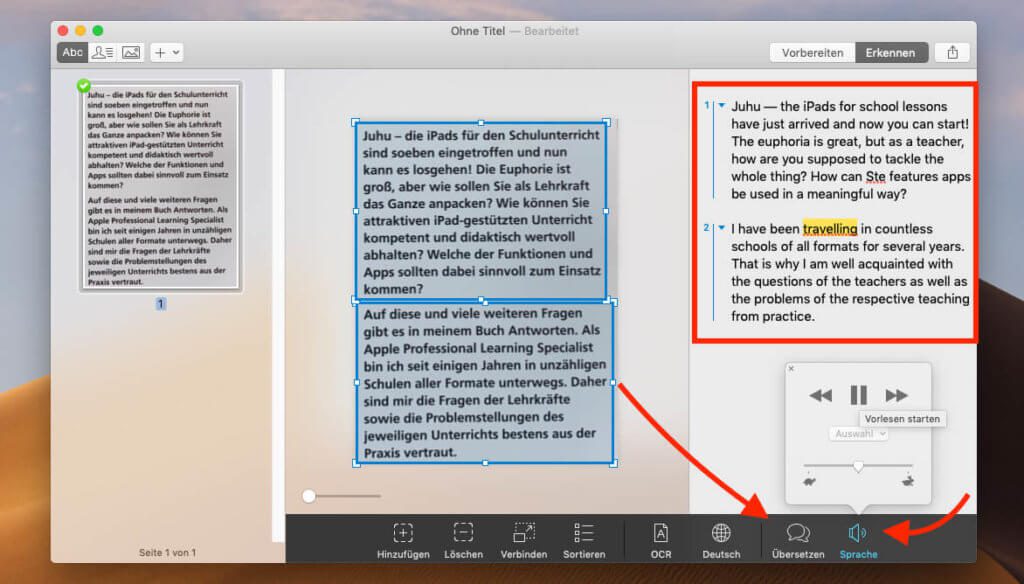 With the buttons "Translate" and "Read out" you can have texts translated into all possible languages ​​and then have them read aloud.

At just under 55 euros, the program is not super cheap, but since I have it Setapp subscription is included, for me it was more or less "free" or included in the app flat rate at no extra cost. Since Prizmo 3 does not rely on a subscription model, I myself consider the 55 euros a fair price, as the software is also constantly being developed and was actually programmed with attention to detail.

You can find Prizmo either in the Mac App Store or on the Developer website. There is also a Pro version with extras, but I don't need them. I haven't found out what the "extras" are either, but the basic version of Prizmo 3 is already so extensive that I really don't miss anything.

Incidentally, the free demo version is not limited in time, is fully functional and only turns some words into a series of these characters: ●●●●●. If you export an image, "Unregistered Copy" is superimposed on the image in white.