Mac app TripMode: A must-have for the "Personal Hotspot" feature of the iPhone 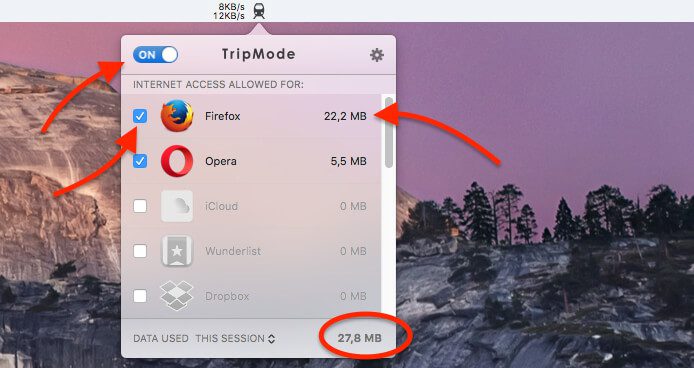 With my iPhone contract, I deliberately chose one that included a high data volume before you were throttled to Stone Age speed. However, I only use a small part of the data volume directly with the iPhone, because much more often I use the iPhone on the go as a personal hotspot to access the Internet with my MacBook. The data traffic of the Mac runs via the iPhone and the data consumption generated by the Mac also falls on the iPhone accordingly.

Many Mac apps access the internet connection in the background

Anyone who has ever brought their Mac to the Internet via the iPhone's personal hotspot function will have noticed how quickly the included volume on the iPhone is shrinking. This is mainly due to Mac apps that are started when the system is started and then access the Internet connection in the background. In my case these are, for example, the synchronization of iCloud and Dropbox, the loading of emails and also updates of programs that are already loaded in the background and are then ready for installation (with many programs you only get the message that a Update is ready for installation).

TripMode - monitoring and blocking of the internet connection

In order to save the data volume as much as possible, I got the paid Mac app a few months ago Tripmode Installed. This is installed in the menu bar and offers a button there with which TripMode can be switched on and off. This works with two clicks. If you have activated TripMode, you can very easily allow or deny access for each program in a program list.

The summary of how many MB of data was used in the last or current session and how many MB each individual program already has "on its conscience" is also very helpful. This allows you to quickly see who the worst culprits are and then deactivate them in a targeted manner. I like to take a look at the list, because it's so exciting to see which programs are busy sending or receiving data over the network. 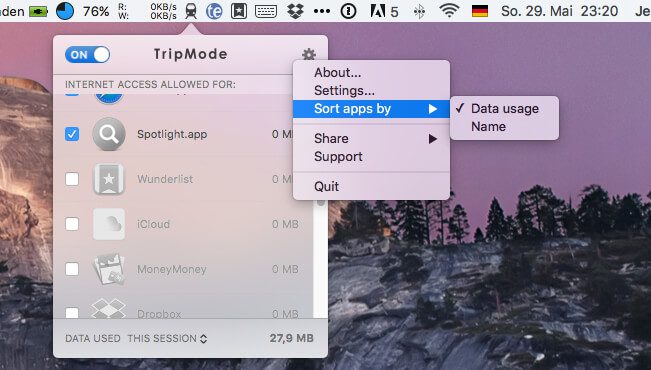 The program list can also be sorted according to data consumption with TripMode. In this way, the culprits who use mobile data the most can be found quickly.

Another practical feature is the automatic activation of TripMode. The app remembers the network names and the status of the app in the respective network. Once you have activated TripMode in a network, it will always switch itself on in this network in the future when you connect to the network.

In the TripMode settings you can choose, among other things, that TripMode should always start with the system.

My approach to "save data"

TripMode is usually activated for me when I surf the net from my iPhone via LTE at home or on the go. Then I basically switch everything off first and then specifically deactivate only those Mac apps that I also use. Dropbox and similar data hogs are usually only activated when I need to do something with them.

Another good tip for saving data volume is the Browser "Opera" with the "Opera Turbo" feature, which I presented in more detail in this article.

Important questions and answers about TripMode

There is a FAQ section on the TripMode homepage. I have briefly translated this for you and included it here so that you can get your open questions answered straight away. If something is still open afterwards, ask me via the comment function - I'll be happy to help.

I have been an avid user of the TripMode app for months and have had very positive experiences with it. I have already used the app to work with a mini data volume of 500 MB, which I had to add to my smartphone contract last year in order to get internet access in Italy. There was no WiFi in the apartment and TripMode was my salvation. I deactivated it briefly and within a few minutes 250 MB were gone without doing anything useful with it.

The 7,99 USD that the app currently costs can easily be saved in nerves and data volume. :)

You can here with the developers on tripmode.ch also get a free demo version as a download. Then you can decide whether you want to buy the app or not.