Read for you: The big Mac book for beginners and those switching

A few weeks ago the Vierfarben-Verlag sent me two copies of the book "The big Mac book for beginners and those switchingThe target group of this work is - as the title makes clear - complete newcomers to the Mac and those users who want to switch from Windows to the Mac. The book was written by the authors Jörg Rieger and Markus Menschhorn, both of whom are daily working on a Mac and who came from Windows or are still in contact with Windows PCs. So here are two people writing who know what the Finder is and how iCloud works. ;-)

The "big Mac book" is really suitable for beginners and also explains basics such as the use of gestures on the trackpad or on the Magic Mouse (photos by Sir Apfelot with the kind permission of the publisher).

"Without any prior knowledge"

At the top of the book cover is printed "No previous knowledge" and you can take that literally, because the book does not require anything. Except maybe that you can unpack the Mac yourself and plug the plug into the socket. But then the reader is already taken by the hand, with everything from installing macOS to setting up iCloud with a new Apple ID being explained step by step.

Which Mac is right for me?

Actually, I'm doing the book an injustice here, because it starts much earlier: The first few pages clarify which Mac model from Apple is the right one for your own needs. So if you only know that you would like to have a Mac, you can buy the book BEFORE you get the Mac. In a multi-page article, each model from Apple is presented with its strengths and it is briefly explained for whom the model is suitable. The following Macs are taken into account:

It is also interesting that the iMac Pro, which should not be released until December 2017, is mentioned here as an alternative for the Mac Pro. This means that the book is already quite up-to-date as far as the Macs are concerned. 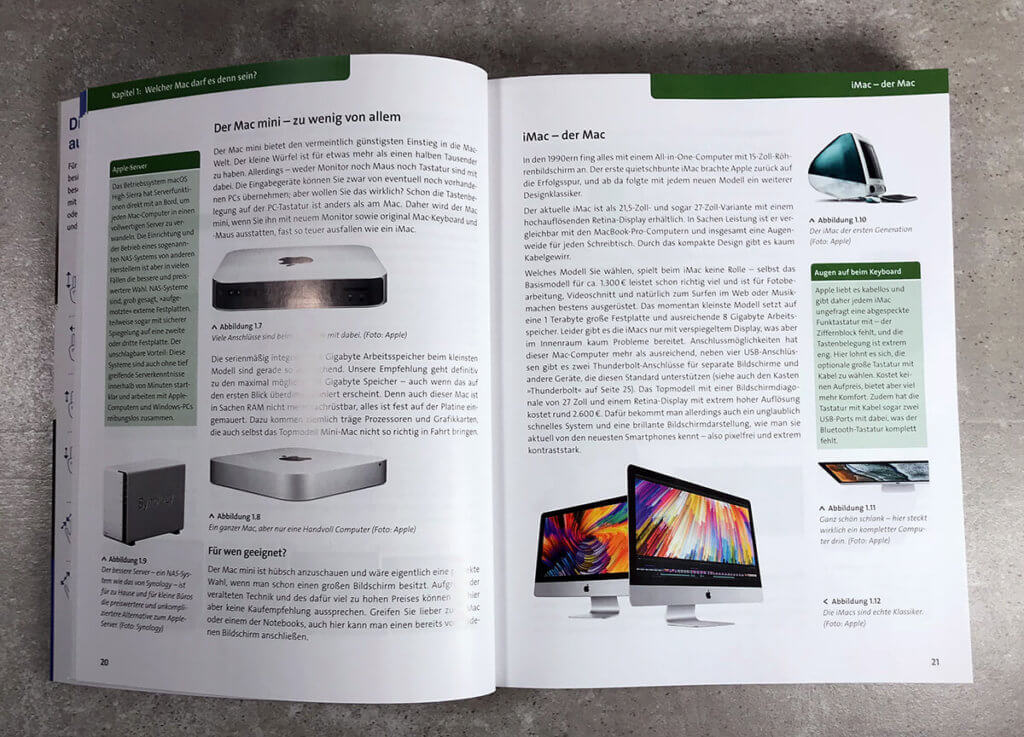 The book takes the reader by the hand quite early on and advises them on which model to choose before they buy a Mac.

Also mentioned is the iPad or iPad Pro and how it can function as a computer replacement. Devices such as the iPhone and the Apple Watch are also mentioned here, because cooperation with the Mac will play a role in later chapters. In this large article, "Which Mac should it be?" also discussed SSD hard drives, Retina displays and Thunderbolt. Of course, you don't get a page-long explanation that provides more detailed information about these terms, but it is briefly mentioned what it is all about. That said enough for a total Apple newbie.

The table of contents at a glance

So that one roughly knows which areas the book covers, I would like to briefly list the main chapters. Below that there are 10 to 20 sub-chapters each, which describe certain programs or aspects of the super-chapter, but I think listing them would go too far here. 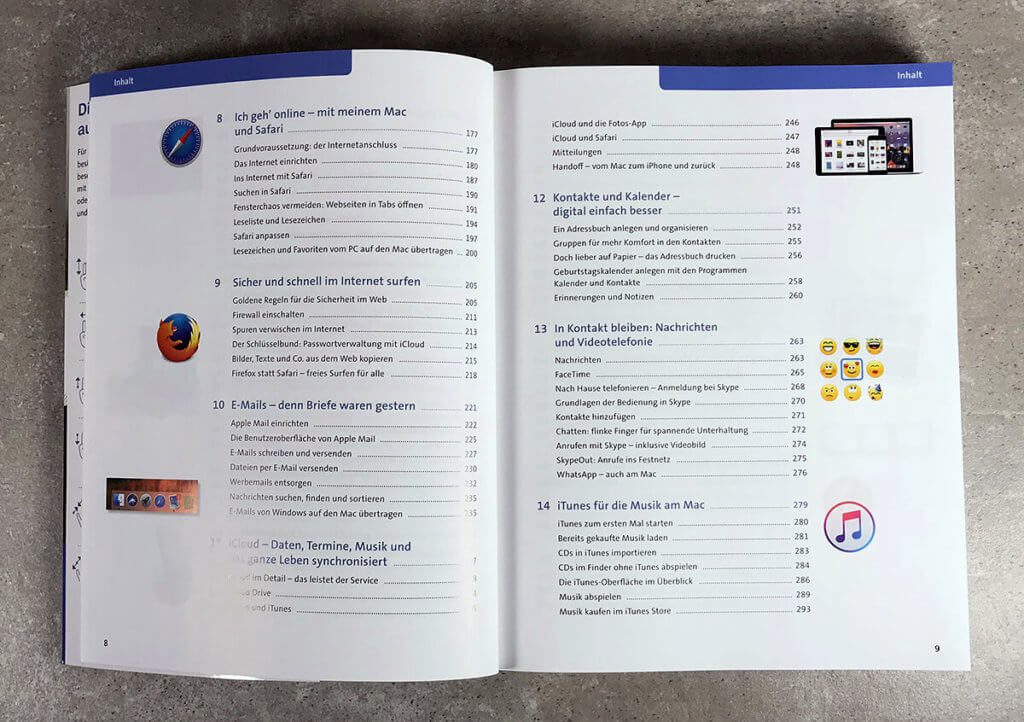 The table of contents shows how comprehensive the book provides information on macOS, settings and working with programs.

You can already see from the compilation of the main chapters what scope the manual for macOS covers. The index in the book, which contains technical terms such as Kernel Panic, Finder, NTFS, Ethernet cable and the like, is also helpful and shows the pages on which these terms can be found. I think this is a very handy place to go for Mac users who are confronted with new vocabulary.

I have to admit, I am always afraid of authors who write such manuals. You have an extremely extensive work (well over 400 pages), which is also equipped with many screenshots and then it is only "up to date" for one year, because then a new version of macOS will be published by Apple. That sounds like a lot of night shifts and square eyes to me, in order to constantly and as quickly as possible cover the latest version of macOS with the manual. Thanks for taking the trouble!

Despite the amount of work, one does not notice the writing style and the design of the book that time pressure certainly also played a role here. For absolute beginners, even the smallest steps are documented with screenshots. The descriptions are on a very understandable level and if there is a bit of technical jargon in the text, the authors apologized directly because there was no other way to explain it. : D 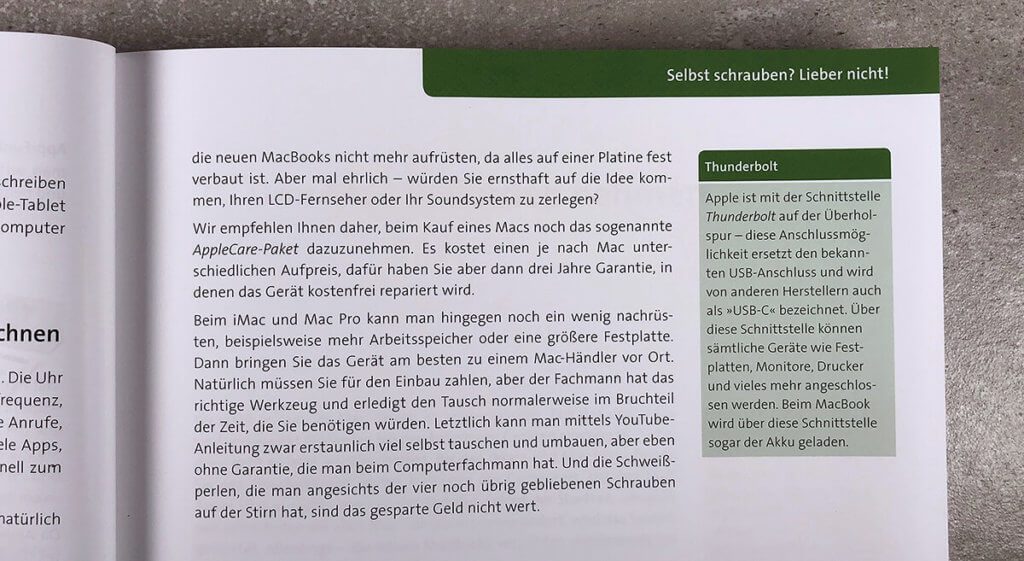 Small info boxes and notes in the margin provide brief and concise information about certain topics that fit the main text.

The layout of the book looks fresh and invites you to leaf through it. I have the book on the coffee table and often sit there in the evening and look at one or the other chapter. The texts are loosened up by many graphics and screenshots and of course also by small info boxes that offer brief information on specific topics on the side of the page.

The whole thing is rounded off by a flap with important swiping gestures for the trackpad on one side and on the other helpful keyboard shortcuts for macOS performs.

I think the book is something that anyone new to the Mac should really give. It goes far beyond just operating the Mac and also covers important topics such as security when surfing the Internet, backups, choosing the right Mac or parental controls on the Mac. Even references to alternative programs that can be used in addition to the Apple apps are given in the book. I think that's very "holistic". :)

You can't complain about the topicality of the book either. All screenshots are made under macOS High Sierra and the texts read about Mac models like the iMac Pro, which has not even been published yet. How could you be more up-to-date here? Only websites that can be updated daily can do that. 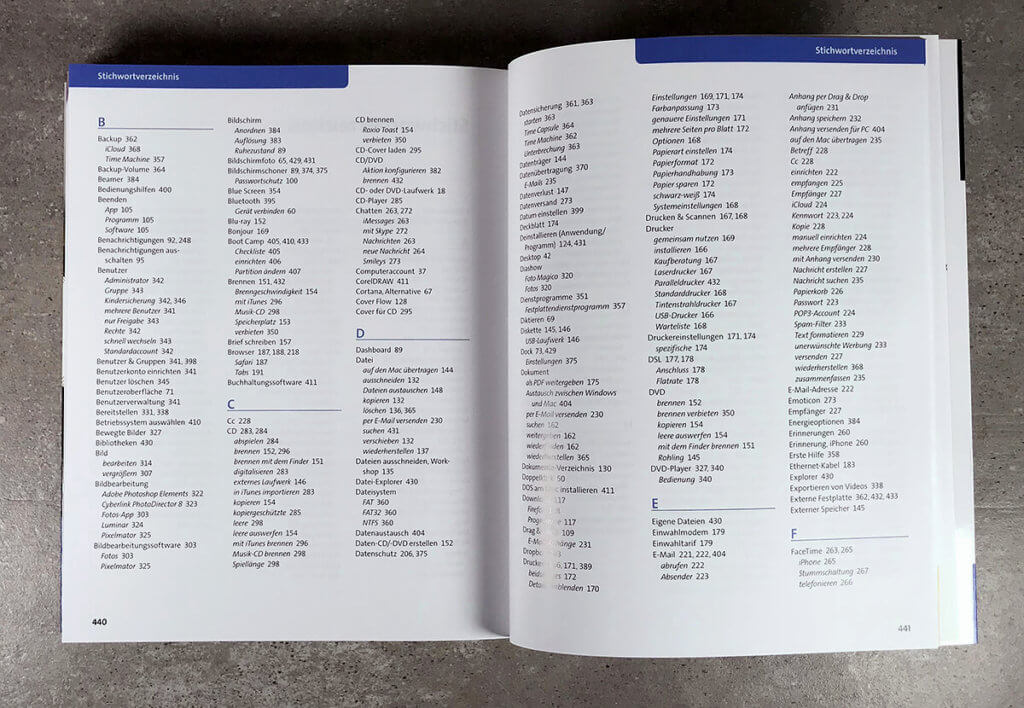 In the index of the book you will find many terms with the corresponding page numbers where they are explained. So you can find out about the functions of iCloud as well as about the NTFS file system, which Windows users in particular will be familiar with.

The book is fun to flip through, and it's a great way for beginners to learn about their new Mac while they're sitting on the sofa. For beginners, the explanations of the whole terms such as Finder, FileVault, iCloud and the procedure for simple actions such as burning CDs or watching films are very useful if they want to exchange ideas with experienced Mac users. At the latest when you ask a question on a forum at some point, you will be confronted with such things.

From my point of view, the work with almost 450 pages and a lot of illustrations and instructions is something that should be added to the shopping cart with every new Mac. If I ever get to know someone who needs a book tip for macOS, then this book will definitely be a recommendation. 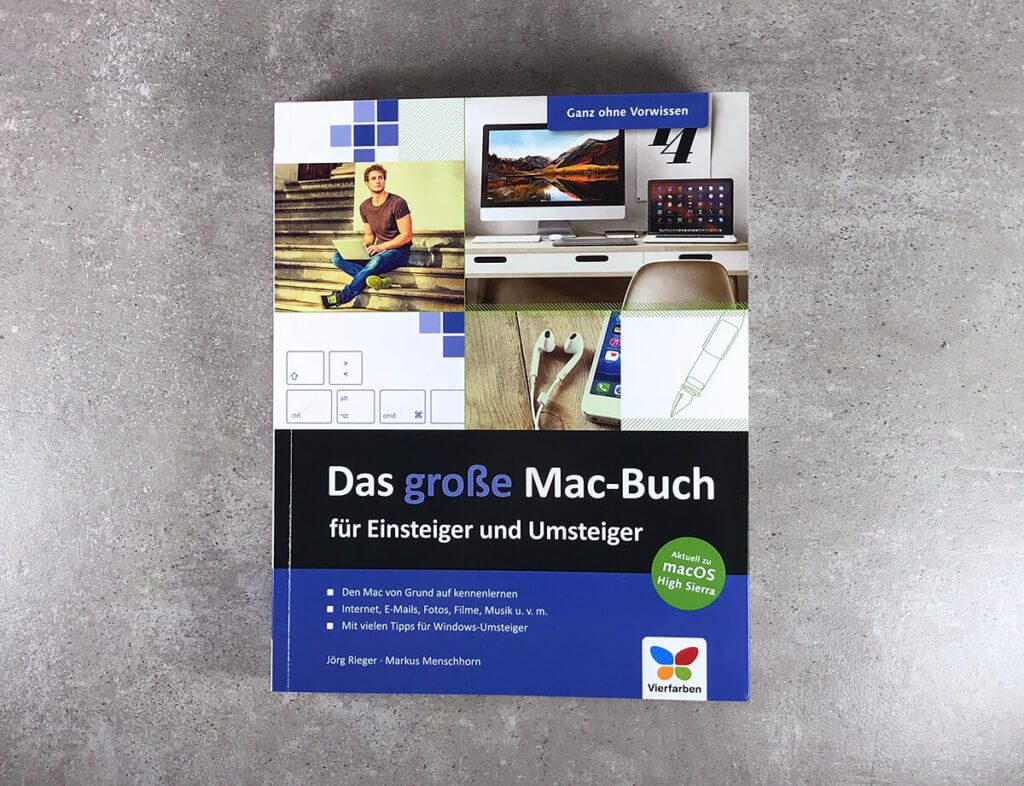 The basic work for Mac beginners is not only made appealing in terms of the cover design, but is also nicely and clearly structured on the inside.

Anyone who has already had a lot of experience with macOS and their Mac will surely find this beginner's book a bit superfluous. It's really written to start from scratch and slowly introduce the reader to the Mac. For this reason, many articles should be too obvious and therefore not in-depth enough for advanced Mac users. For this reason, this work is more for absolute newbies who may not even have had contact with computers and need a gentle learning curve. ;-)

Short note: The book got a 1-star rating on Amazon because the commenter said certain topics such as APFS (Apple's new file system) or the possibility of sharing files under iCloud were not mentioned. I can very well understand that some topics are simply not covered in the book because they may not be of interest to newcomers or those switching from Windows. The APFS file system superseded HFS + in the High Sierra, but I don't think many Mac users even knew they had HFS + before. As a user, you do not notice anything and accordingly for me this is more of a topic for a "Mac professional book" but not for a book for beginners.

I received a copy of the book from Vierfarben-Verlag to be raffled off among my readers. As always, the raffle will take place in my newsletter. If you want to participate, you will find the relevant information in the next newsletter! So carry yourselves here in the newsletter if you would like to be informed about the raffle! At this point my thanks again to the publisher for the copy for the raffle!

Update 23.11.2017/XNUMX/XNUMX: Unfortunately this raffle is already over, but if you subscribe to my newsletter, you are sure to be part of one of the next campaigns!