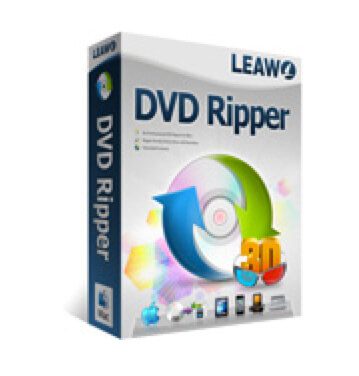 Today I picked out software to rip DVDs on Mac. From now on I will always make a copy of the DVDs that our children get their hands on, which will then be put in the original DVD case. The children sometimes do not handle the DVD discs very carefully and some films are so scratched that they can only be read on a Mac because the Superdrive (see here ) apparently has better error correction than the usual stand-alone DVD players.

The master plan: why and how to rip DVDs? 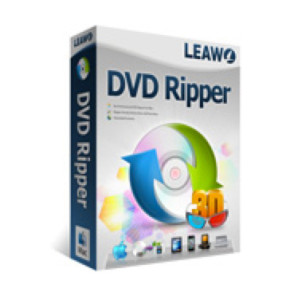 In order to copy the DVDs, I looked for a program that rips them (reads out) and saves them to the disk. After that the file is also on my [Synology NAS-> synology-nas] and there ekes out its life as a backup. At least that is the theory. First of all, of course, the appropriate program for ripping the DVD on the Mac is required and this is where Leawo Mac DVD Ripper comes into play.

I have the software for testing first downloaded here. You can try the Mac DVD Ripper for a few days free of charge. However, one has the restriction that a watermark is included in the image. The full version costs just under 30 EUR. The installation is quite simple: Simply copy the file from the DMG into the "Programs" directory. In addition, you have to use the freely available X11.app (also to be found as XQuartz) install (what is that good for? here read!). 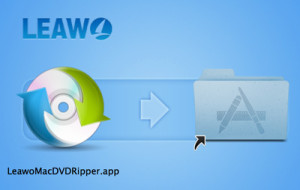 Once that's done, you can start Mac DVD Ripper. If you insert a DVD, as I did with my Apple Superdrive, you can then select it in the file browser. The software then displays all the movie tracks that can be found on it. If you like, like me, you can activate the MP4 stream in the settings. This is useful if, for example, you want to watch the film on the Apple TV later via the NAS, as it can then be streamed. I also activated the "Merge" function in the welcome window so that all ripped tracks on a DVD are cut together. I always prefer one large file to many small ones - but that is certainly a matter of taste. :)

The format in which the source material should ultimately be available can be defined by clicking on an icon that can be selected in each individual movie track.

The first ripping of the DVD

With my trial version, I was able to rip the first DVD relatively quickly. At the beginning you choose whether you want to load the DVD in "General Mode" or in "Special Mode". The special mode would probably be more suitable for copy-prized DVDs, although it does not explain in detail what the difference is here.

There is also a note on the website that - if you live in a country where reading of copy-protected DVDs is allowed (so probably not in Germany!) - you can ask the support for a plugin that will do that too Copying of DVDs with copy protection is allowed. I just chose the "general mode" and continued. 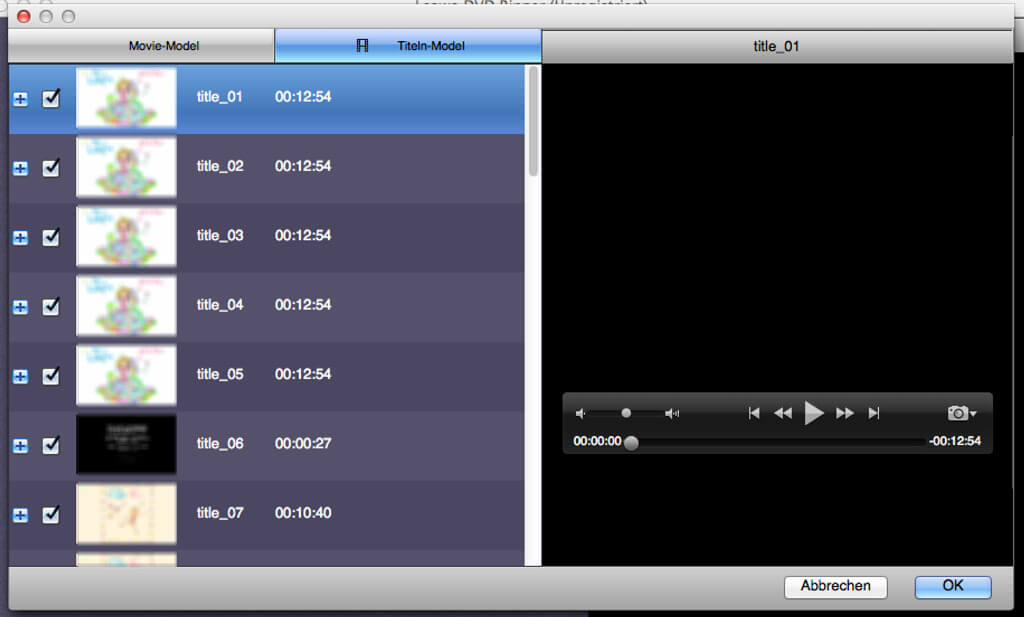 The tracks are selected in a separate window. I have softened the screenshots to avoid copyright problems. On the right you can see a preview of the track and create a screenshot with the camera symbol.

After selecting the appropriate tracks (an "mark all" option would have been nice here!), I selected "AppleTV" as the target profile and then started the conversion. In total, it was about an hour of video material that the ripper on my MacBook Pro Retina (mid-2012, 2.6 GHz i7) had to put on the disk. The whole action took about 30 minutes. But the result was a good video with the ending .mp4 and a good video quality.

In addition to "AppleTV", the software also offers numerous other ready-made profiles for devices from Sony, Microsoft, Android, Apple, Nintendo and BlackBerry. Ripping a DVD with the "AppleTV HD" profile lacks a certain logic when comparing the [resolution of a DVD-> dvd resolution] with that of a full HD video. 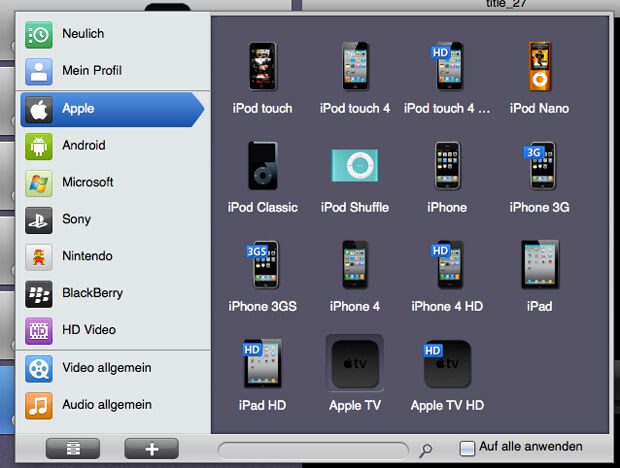 Those who like to take matters into their own hands will also find numerous output options: MP4, AVI, MOV, TS, TRP, VOB, MPG, MKV, WMV and ASF can be found here.

I don't have any 3D films on DVD myself, but the software also offers the ability to rip 3D DVDs. You can then choose whether the 3D effect is displayed in the form of line jumps or with images lying next to one another.

The software goes far beyond simple ripping with the editing options that can be found by clicking on the clapperboard symbol on a movie track. If you click on this symbol, a new window opens with a before and after view of the currently selected track. During playback, you can change color corrections, contrast, brightness and even the volume of the clip. Reversing, cutting or adding your own watermarks is also possible here. I only tested this area briefly as I don't want to do much more than rip the films, but if you want to do a little post-processing, this is definitely in good hands. 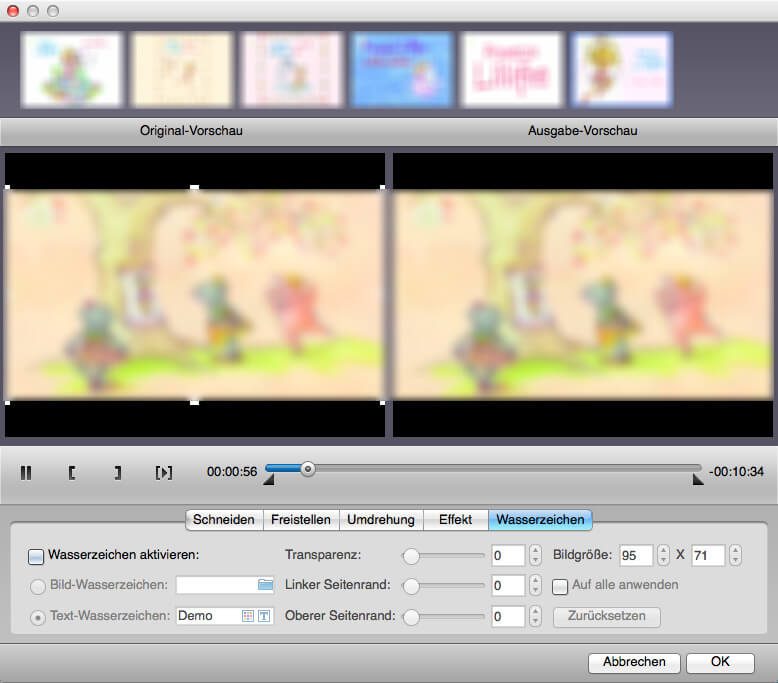 The options for editing a track in Mac DVD Ripper are very diverse and well worth mentioning. Screenshots of the film have been defaced by me again.

Conclusion from my point of view

Due to the XQuartz window system, strange effects occur here and there when the program is operated with two monitors. However, you get used to it quickly and it has no effect on the software output. The ripped videos look flawless and the possibility of outputting the films in an MP4 streaming format should be of particular interest to users of network hard drives who have films "delivered" from a central point in the house and then watch them on various devices want.

The software is well suited for my purpose and it also works "great" with the external Superdrive that I have connected to my MacBook. Only the option to rip copy-protected films on the Mac was not tested for legal concerns. I leave that to people from other countries. However, I am sure that the support with the corresponding add-on will also help here.

Expressed in asterisks, I would give the software 4 out of 5 stars due to the somewhat awkward operation, but the otherwise good video properties. From my point of view, there is still a little room for improvement. :-)