Mac Error: "The operation could not be completed because the XYZ object is in use." 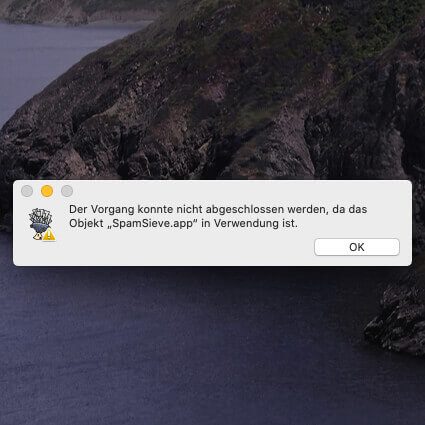 When I wanted to update my anti-spam plug-in "SpamSieve" for Apple Mail on the Mac today, for the first time in years an error occurred that prevented the current version of the program from being installed. The error message still said that I could do the installation manually by copying the "SpamSieve.app" file into the "Programs" folder by hand.

Error message: "... because the object is in use"

No sooner said than done: I opened the DMG and dragged the SpamSieve file into the alias of the programs folder, which is in the DMG with most installers. Then came the question of whether I would like to replace the existing file, which I answered with "Yes".

However, the Mac didn't feel like it and returned the familiar error message:

The operation could not be completed because the SpamSieve.app object is in use.

This is the typical error message on a Mac when trying to replace the program file of a running program.

Difficult conditions: SpamSieve is not in the app switcher

"Good," I thought, "I'll have to quit the program first." So opened the app switcher with the keyboard shortcut CMD + Tab and checked for SpamSieve. Unfortunately, the program could not be found there because it is set so that it only runs in the background and is not visible in the dock or in the app switcher.

Now the quiz question: How do you quit an app that you can't see?

I cannot find the SpamSieve app via the app switcher. But there is a way to end it anyway ... (Screenshots: Sir Apfelot).

Solution: Quit the app via the "Activity Monitor" utility

The answer is simple, but you can't figure it out if you run the utility "Activity indicator"Hasn't seen it before. For Mac beginners, the tool seems a bit overwhelming, but it's not.

What you can do with the activity display, I might describe in a separate post, but in the current case we are entering the name of the program that we want to end in the search field in the top right corner. "Spam" is enough for me to filter the list so that only two entries appear. One is the SpamSieve launch daemon, which ensures that SpamSieve always runs in the background, and the other is SpamSieve itself.

So we select the entry "SpamSieve" and then click the button with the X to delete it at the top of the bar. A query now appears as to whether you really want to end the process, which we acknowledge with "End". 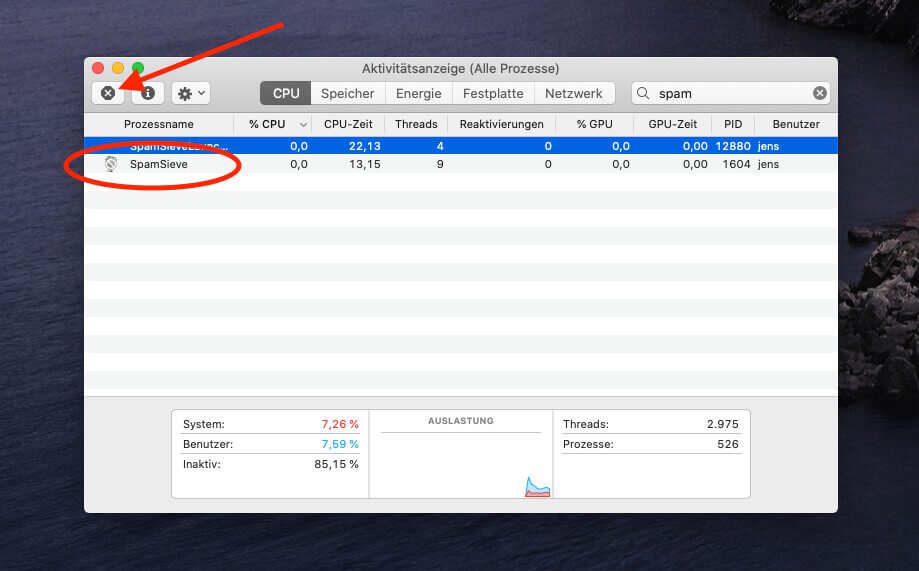 The SpamSieve program is still closed via the activity monitor.

This ends SpamSieve and the copying process or the installer can be started again. This time it runs smoothly and we have the new version of the app on the Mac in the Applications folder, where it belongs.

Do you also have problems with installations or programs that cannot be copied? Then leave me your question as a comment. I like to try to solve your problem.