With the update to macOS Mojave, minor problems sometimes arise, which fortunately can be fixed just as easily. In this case it was a Mac that occasionally slipped into English. But read for yourself what my reader Gerald wrote to me:

Hello Sir, meanwhile I am quite satisfied with Mojave. A bagatelle annoys me a little. When switching on and off I have to "enter" my password and switching off is called "shut down". A very nasty word. "user" and "restart" included. Otherwise we will speak German to each other. I would be grateful for any help - if the opportunity arises! Kind regards from Gerald

If the Mac sometimes reverts to English despite the German language selection, there is a trick.

Instructions for changing the language

There is a command called "language setup"for the terminal, with which you can reset the language setting for the user again. This solves problems such as the mixed English-German buttons and dialogs under macOS. How to do it in detail, I explain here: 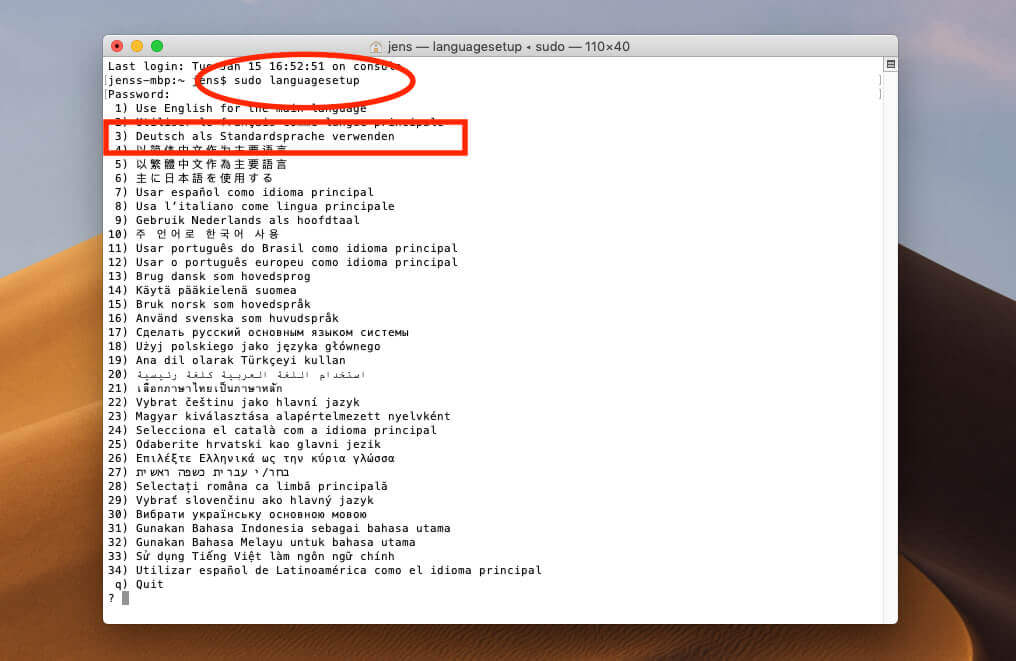 If you execute the command to change the language in the terminal, a long list of possible options appears, including "German".

One has sudo language setup entered, you have to confirm the command with administrator access. A long list of available languages ​​then appears, with German being assigned the number 3. After restarting the Mac, all dialogs and buttons should appear in German.

Gerald also confirmed to me in an email that the measure was effective:

Hello Jens, it's done! After numerous attempts, I logged in as administrator with a password, then the sudo setup worked. You couldn't have known that we were two users. But you got the ball rolling. Thank you very much for that. […] Kind regards and wish you such a weekend, Squire Gerald