I recently had an interesting conversation with a reader who asked if you can disable external hard drives from hibernation on Macs. My first thought was the system setting "Save energy", which includes an option that allows the hard drives to "hibernate" after a certain period of inactivity. However, after doing some research, I found out that disabling this option mostly only works for internal hard drives.

With external hard drives one reads different statements. Some say that these cannot be influenced at all by the setting in the "Energy saving" control panel, while others say that it depends on the manufacturer whether a hard drive takes this setting of macOS into account or not.

One thing is certain: the time until spin-down is not handled uniformly on external hard drives. However, if a certain hard drive does not react to the setting of macOS, there is still the option of allowing a certain degree of influence with third-party apps. But more on that below. First of all, here are the findings that I got when researching the "Save energy" control panel and the option to hibernate the hard drive. 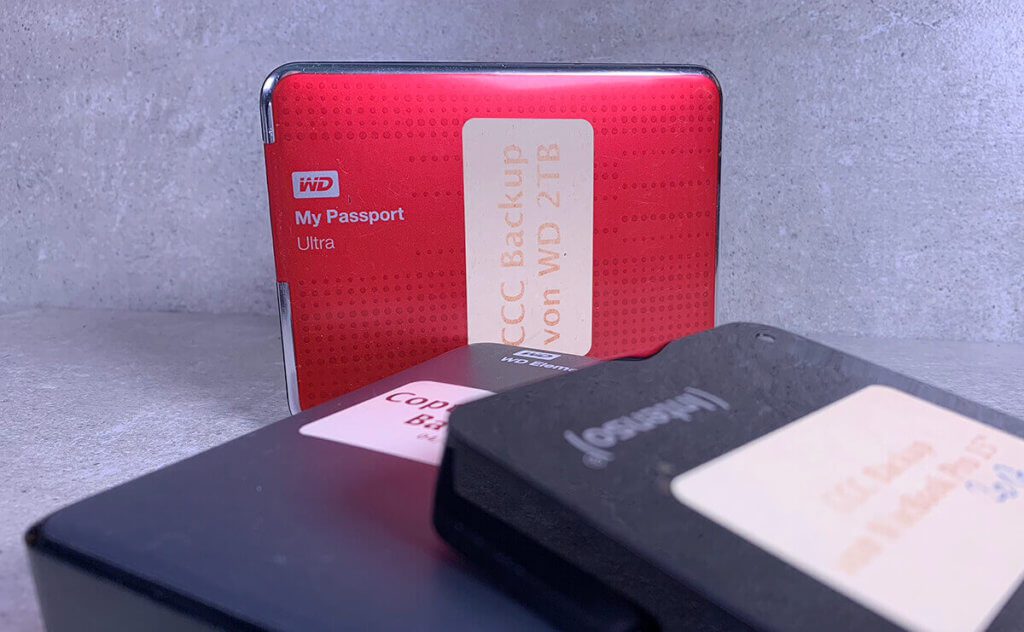 Deactivating macOS hibernation does not always work with external hard drives. In this article I explain how to get them not to go to Spindown (Photo: Sir Apfelot).

Inset: Why you should put hard drives to sleep

In some cases it makes perfect sense to prevent a hard drive from spinning down (i.e. shutting it down to sleep). This is the case, for example, when audio or video is being recorded and the hibernation of the hard disk causes frames to be dropped or the audio recording has gaps because the hard disk was unable to write any data for a short period of time. But these are exceptional cases. As a rule, hibernation is not only recommended for hard drives to save energy, but also to avoid shortening the service life of the hard drives.

Conventional hard drives are less designed for this. There are special series of hard drives like the WD RED, WD RED Pro, WD Ultrastar or Seagate IronWolf, which were specially designed for server, RAID and NAS systems. These special hard disks withstand continuous operation with the corresponding heat development and can also cope if they are constantly writing or reading data - which is never the case with a "normal" hard disk. At most a longer copying process takes place, but otherwise the disks tend to be in wait mode.

If you use an inexpensive hard drive that is designed for operation on a desktop computer, in a NAS or RAID system, or if you never allow it to go to sleep, then this is of course reflected in the life expectancy of the hard drive. Certainly it does not get "burnout", as in a server operation, where small amounts of data are constantly queried by many processes at the same time, but it should still have to struggle with problems earlier. If you allow the hard drive to take a break here and there with the option "hibernation", this certainly has a positive effect on the durability. 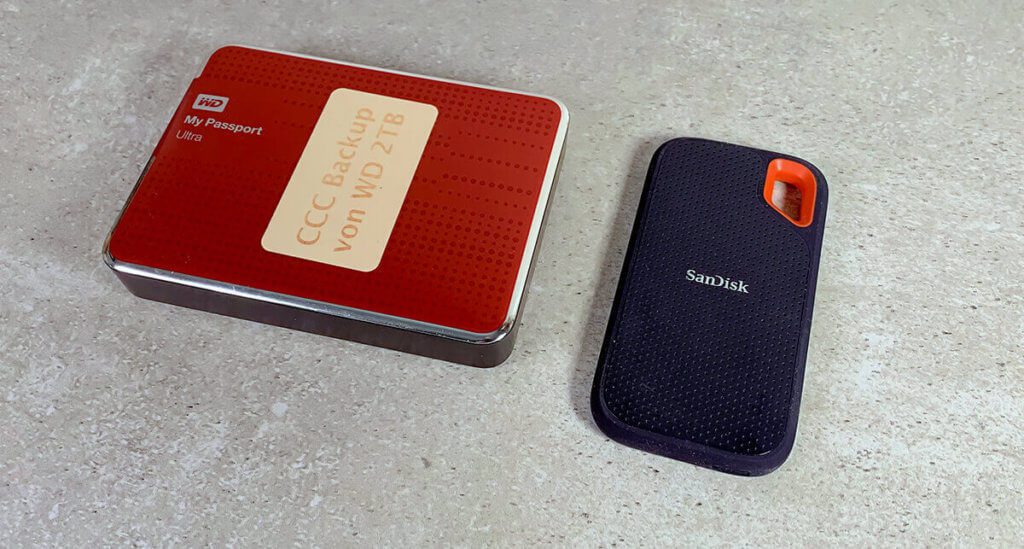 On the left the hard disk with "rotating parts" and on the right the SSD from SanDisk, which does not have any mechanical parts.

External SSDs do not have a sleep mode

I recently had a little one Review of a cheap SSDthat can be connected externally to the Mac. This type of external storage has practically no sleep mode and is always on standby because it is a storage device like a USB stick. There are no rotating parts and accordingly no mechanical wear and tear that would have to be minimized by a spin down. So if you are looking for an external hard drive that offers extremely fast access times, you should look at the external SSDs from SanDisk look, which I have also acquired.

The option for the hibernation of internal and external hard drives can be found under "Save energy" in the system settings.

In the system settings under "Save energy" you will find the option "If possible, activate hibernation for hard disks" under the tab "Battery" as well as under "Power supply". This setting can therefore be set separately for battery operation and the time in which, for example, a MacBook is connected to the power supply. I assume that an iMac that only runs without a battery has no separate areas, but the option to hibernate the hard drives is still there.

As mentioned above, this setting usually only affects internal drives. You can still try to deactivate all idle states (including the monitor, etc.) completely. In some cases, an external hard drive will not shut down either. Most of the time, however, you have to trick with third-party apps, which I present below. 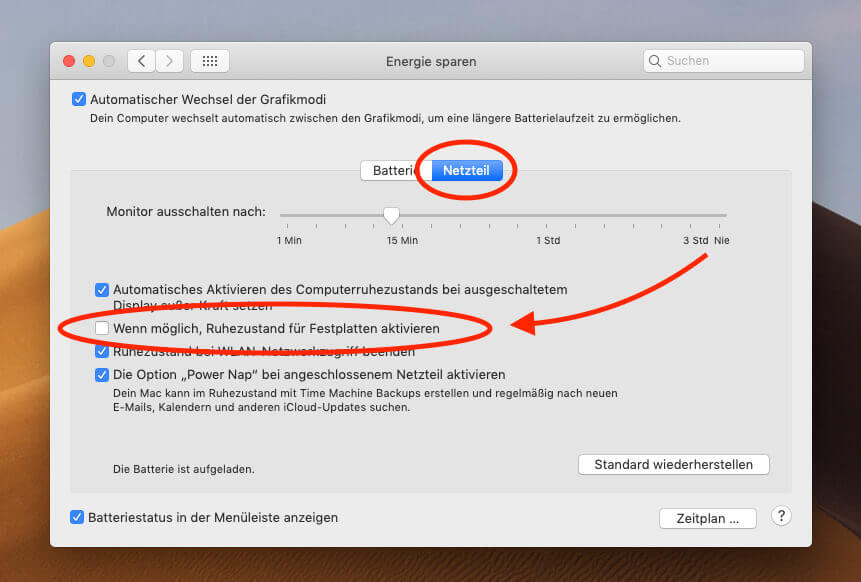 The option to activate the spin-down of hard disks is also hidden in the "Save energy" control panel.

Is the hibernation active?

If you tick the "Put hard disks to sleep when possible" option, the time is usually set to 10 minutes of inactivity. If the hard disk has not been in read or write mode for so long, it is put into hibernation. You won't find these 10 minutes in the system settings, but you can read them out by clicking on the Port enter the following command:

The output then shows the corresponding number under the entry "disksleep". The 10 minutes can be seen in the screenshot. 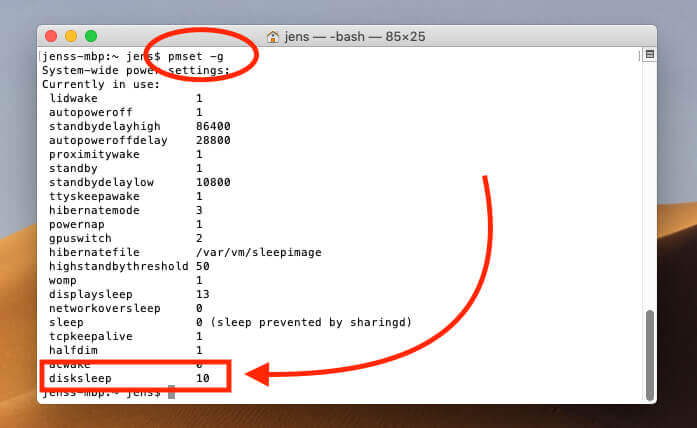 The terminal command pmset can also be used to read out the time until the hard disk is idle.

Set the hard disk to idle down to the minute

While you can only activate the idle state with yes or no using the "Save energy" control field, there are more options with the terminal. The "disksleep" parameter can be specified to the minute using the "pmset" command. Here is an example with which the hard drive is set to idle after 45 minutes of inactivity:

The command "sudo" in front of the "pmset" says that it should be executed with administrator rights. For this reason, an administrator password is required after the entry before the command is actually executed.

Incidentally, if you set the value for "disksleep" to "0", the option for sleep mode is deactivated. But this can also be done via the control panel by simply removing the check mark from the option for the hard drives to hibernate.

If you want to make the settings for battery and power supply operation with the terminal command on a MacBook, use the following command:

This deactivates the spin-down for operation on the power supply unit (-c) and sets it to 60 minutes for battery operation (-b).

Influence the spin-down of external hard drives with auxiliary programs

If you still want to deactivate the spindown, i.e. hibernation, on external hard drives on the Mac, there are a few apps that help to influence this. In rare cases, however, even these apps do not work because the time for spin-down is specified by the hard disk controller.

The software "Cocktail" is - like tinker tool and OnyX - basically a recommendation. It can be used to set many system parameters that can otherwise only be accessed via the terminal. Disk hibernation time is just one of them. Ultimately, the same thing can be achieved with the system settings. If this setting is ignored by the external hard drive, Cocktail cannot help either. Then the "Keep Drive Spinning" app may be helpful.

A small warning should perhaps be given with Cocktail before the automated maintenance scripts and the like, which goes beyond pure "settings". These "optimization functions" have done some damage to some people.

This little app only does one thing: keep external hard drives running. The site only says "Mac OS X 10.4", but there are also new entries from December 2018 in the support forum, so I assume that the software will also work with Mojave. In contrast to Cocktail, which only changes the macOS settings, with "Keep Drive Spinning" there is also the possibility that hard drives that ignore the macOS settings are prevented from spindown.

You can find a few other apps online that should help with the problem, but the websites are no longer available, the projects are discontinued or they simply no longer work with the current macOS versions such as Mojave. I hope you have found a helpful approach that solves your problem. If not, please contact me. Maybe we can think of something else together.