After buying a used iPhone XR for my daughter a few weeks ago, I wrote about it an experience report about Flip4Shop. It was so well received by you that I can go straight to the top. Today with an article about a provider that was brought to me via the comments in the other post: maconline.

Now that the opportunity arose to get a MacBook Pro for a friend, I was able to test the used dealer directly. As Sir Apfelot you can't recommend any nonsense - not even to friends - and so I wasn't angry that I was given the task of choosing the right model and taking care of the purchase and installation. That way I was able to put the Mac through its paces right away. 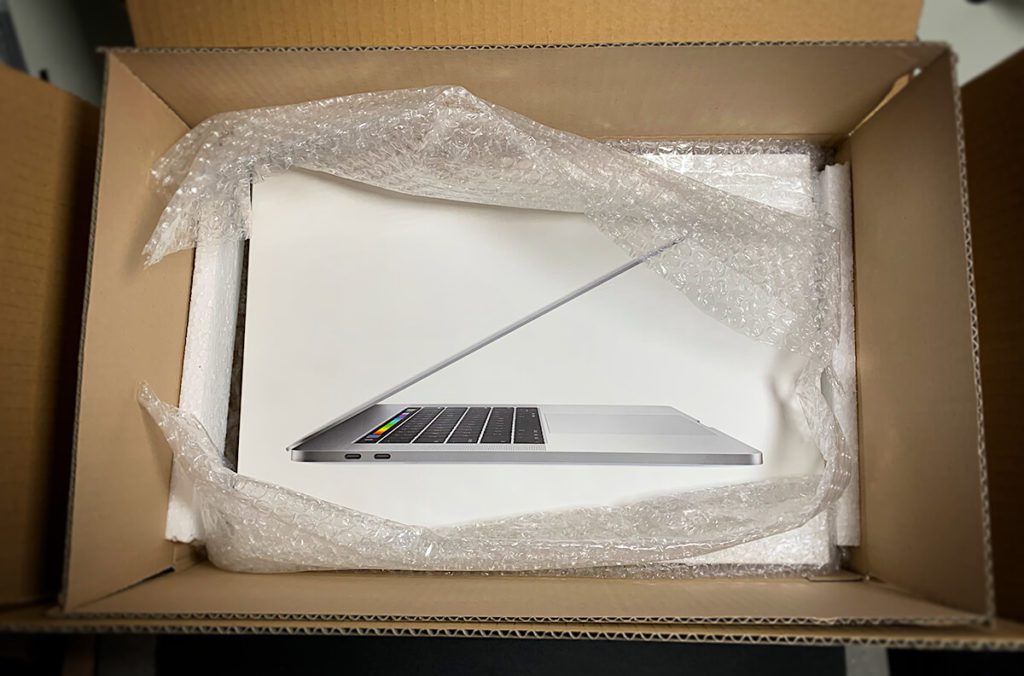 The MacBook Pro arrived well packed in two boxes and in the original Apple box - in this article I will tell you which model it has become and how I chose it (photos: Sir Apfelot).

The advantage of Maconline for the self-employed: VAT identification

A reader had pointed out to me that most used trading platforms for Macs are not interesting for the self-employed because they do not show the VAT on the invoice - consequently you cannot claim this at the tax office and alleged bargains are not all that great deals .

Flip4Shop, rebuy and Co. buy most of the devices from private individuals and for this reason never show VAT. Maconline, on the other hand, has a “For companies” filter, where you can search specifically for products that are shown with VAT or differential taxation.

In my case this was not important because the MacBook was for a private person, but this filter option is certainly an interesting information for entrepreneurs.

One advantage of Maconline: As an entrepreneur, you can filter out the devices for which you receive an invoice with sales tax.

A MacBook Pro - but which one?

My friend gave me only a few guidelines for shopping, which I liked very much. The key points were:

I've added a few personal "specifications" that would be important to me for a device:

When it comes to the processor and graphics card, I usually don't have any special requests. Unless someone does 3D renderings, animations or video editing - something where a particularly fast processor is noticeable - I would “save” here. But if a good model with an i7 or i9 processor is available, it will still be on the shortlist. 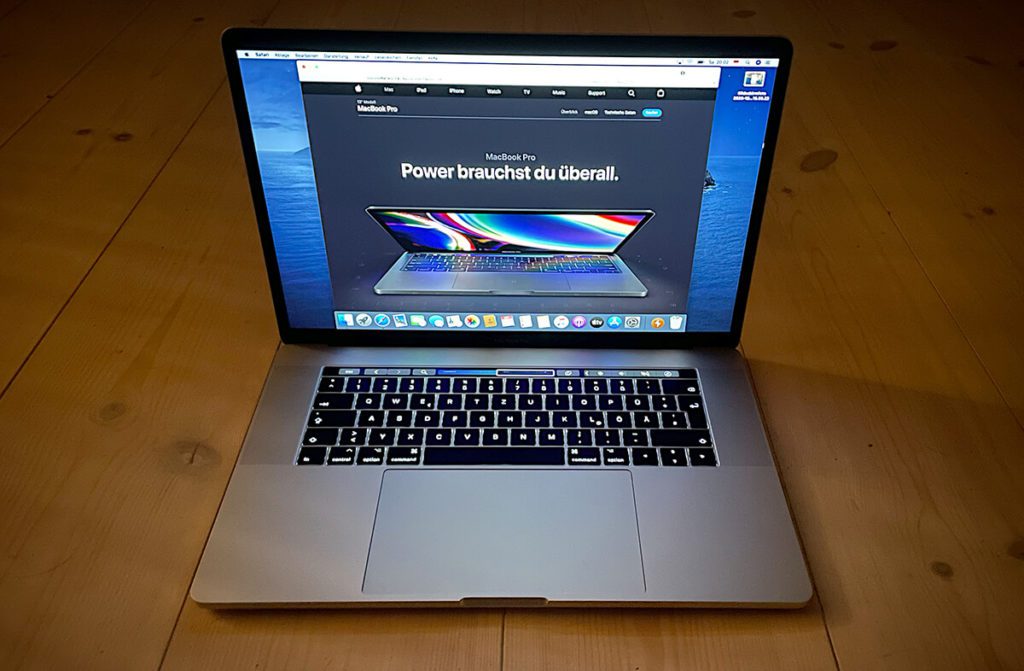 This 2017 MacBook Pro ultimately became it. 512 GB SSD and 16 GB RAM are already a good choice in order not to run into memory and RAM problems.

The bottom line was that only a 15-inch MacBook Pro came into question, as the 16-inch models are all still too expensive. I would have liked to have a MacBook without the "bad" Butterfly keyboard which has caused so much trouble in recent years, but due to all the key data we had no option here.

The MacBook Pro models, which still have the tried and tested scissor technology in the keys, are too old (until 2015) and the new models that are again equipped with this technology are beyond the price range.

The only consolation is that Apple is relatively accommodating by replacing the keyboards in the event of problems and also repairs older devices free of charge. In addition, Maconline gives you a one-year guarantee on every product. 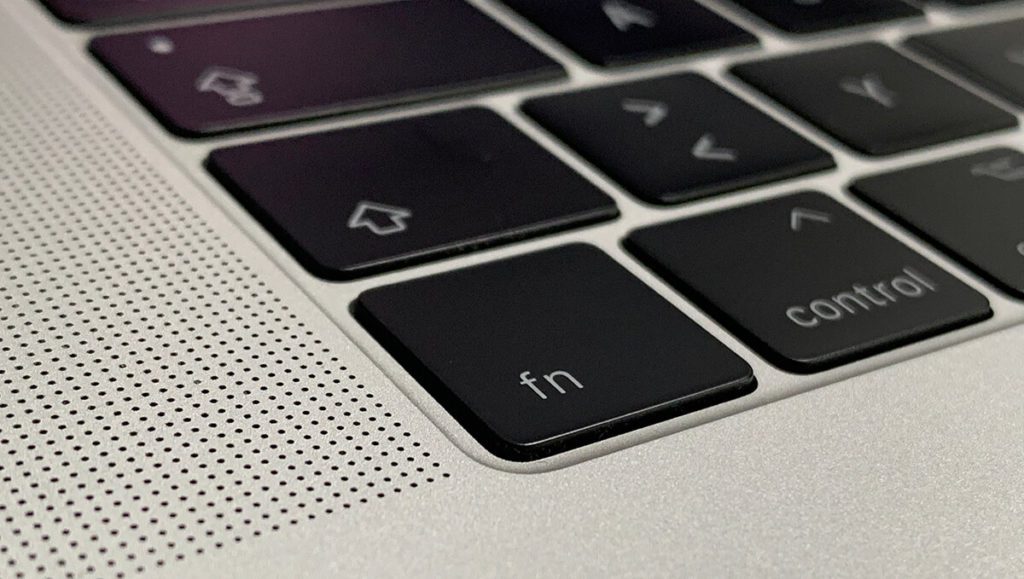 The butterfly keys are nice and flat, but unfortunately there have been tons of complaints and dissatisfied customers in the years that Apple has installed this type of keyboard (photos: Sir Apfelot).

If you click through the MacBook category from Maconline, the first filter you will find is the condition of the MacBook. This can have the following "states": on the corresponding FAQ page are described in more detail. I've just put the descriptions in brackets with the individual classifications: 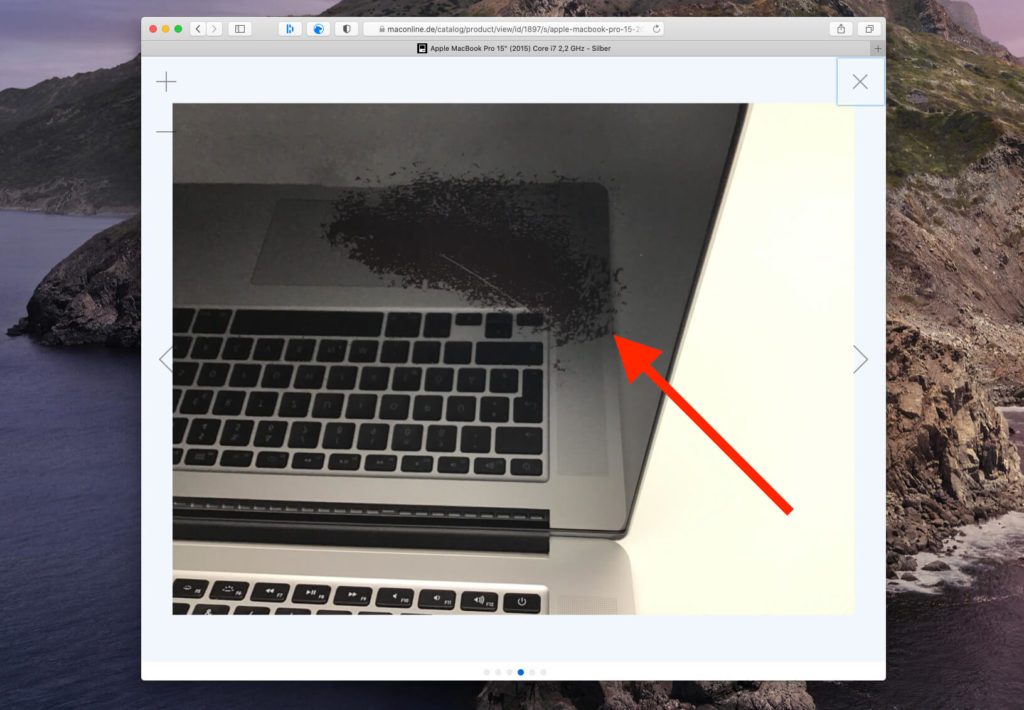 "Clear retina detachment" was the description of this MacBook Pro. The layer on the display is dissolving, which is a known problem with older models. However, if you are looking for a bargain, you can buy such an MBP and easily remove the layer completely. How to do that is here described.

According to the list, you really only want to buy a MacBook Pro that is “as good as new” or “very good”, but I've discovered that the damage and signs of wear are described and even photographed on each device. Here is an example of an "acceptable" MacBook Pro - and that was a product that got it particularly "hard":

Scratches and quirks all around, dents on the floor, extreme peeling of the reflective layer (see photo above)

By the way, the detachment of the reflective layer is a problem (State gate called), which Apple is currently still repairing on a goodwill basis, if you're lucky. Otherwise help these tips in the process of completely removing the reflective layer so that the display can be used again.

But back to the MacBook Pro: The device is dented and scratched, but it is quite cheap. I could have lived with having a dented Mac, but I didn't want to do that to my friend, so I chose a device that was rated as “as good as new”. 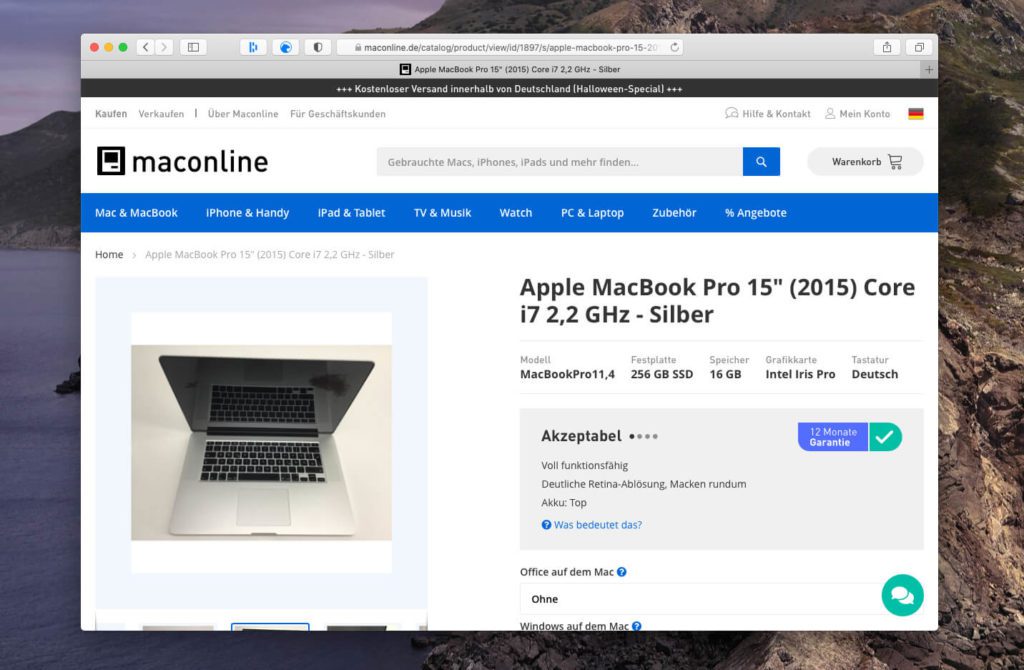 With every used product there are photos that particularly highlight the visual flaws so that you know 100 percent what you are getting. That makes customers happy and probably also reduces the rate of returns.

When buying a used MacBook, the question is always how many charge cycles the battery has already had and what the “battery health” looks like. This can be done, for example, with on-board resources:

Now you have to look under "Full charge capacity (in mAh)" to see what number is there and look for the original capacity that the battery has when new in a technical data sheet. You put these two numbers in relation and get a value between 0 and 100%.

It is much easier with the software "Coconut battery“, Which I use very often - also to monitor the batteries in the iPad and iPhone. There you select the MacBook Pro (it is preselected anyway) and then see in the green bar under "Design Capacity" how much of it is left.

According to the Maconline website, the batteries in the devices are all checked and replaced when their condition is below 85%. I checked this on the model I bought and it had 89 percent battery health and 231 charge cycles. So everything is fine. My own MacBook Pro is also built in 2017 and has "only" 84 percent left. 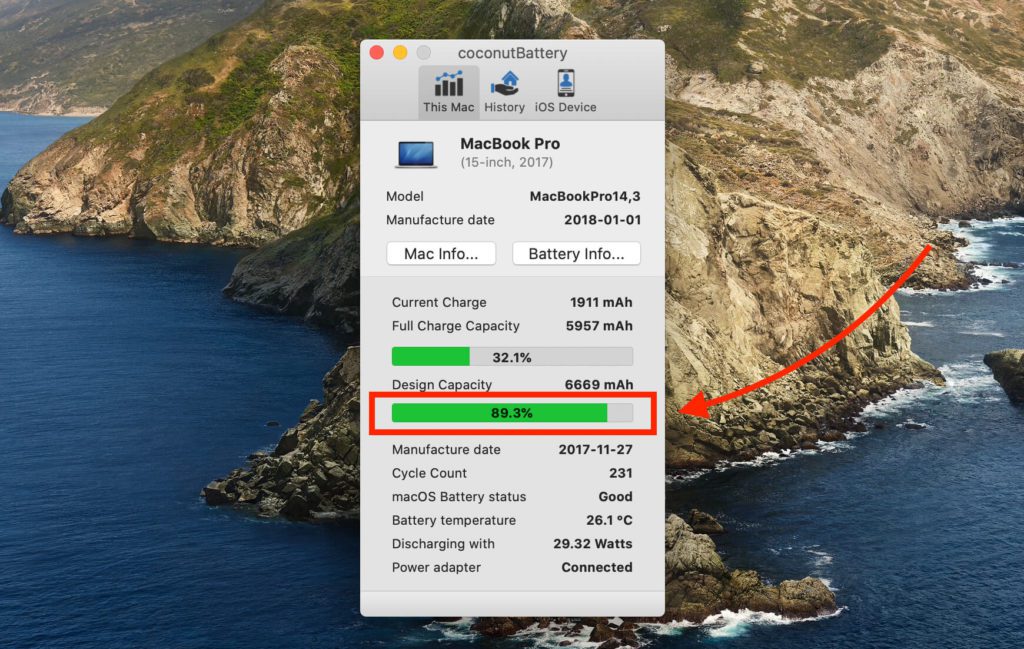 With 89 percent battery capacity, the MacBook Pro is in better condition than my own device, which unfortunately spends too much time plugged into the socket.

Condition "as good as new" - what does reality look like?

In the end, I exceeded the price range of my friend and got him a MacBook Pro 1850 inch with 15 GB SSD for just under 512 euros. The device was classified by Maconline as “as good as new”, which, according to their description, means “no to minimal signs of use”. 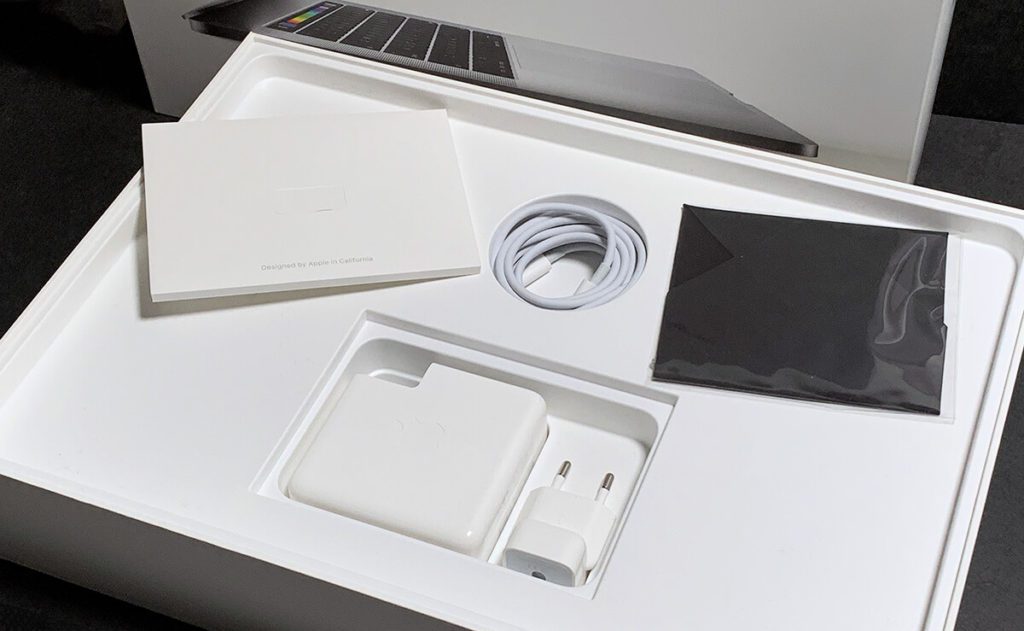 I think it's nice that the MacBook Pro was delivered in the original Apple box - including the accessories.

When the device arrived, I checked this and could only discover a tiny corner in the housing frame that tarnished the otherwise perfect appearance. If you don't go looking with extra light and eagle eyes, you won't even see this small flaw.

From my point of view, "as good as new" was not promising too much. The keyboard - which is unfortunately equipped with butterfly technology - still works flawlessly. I couldn't find any failures here. There were also no marks from the keyboard in the display. 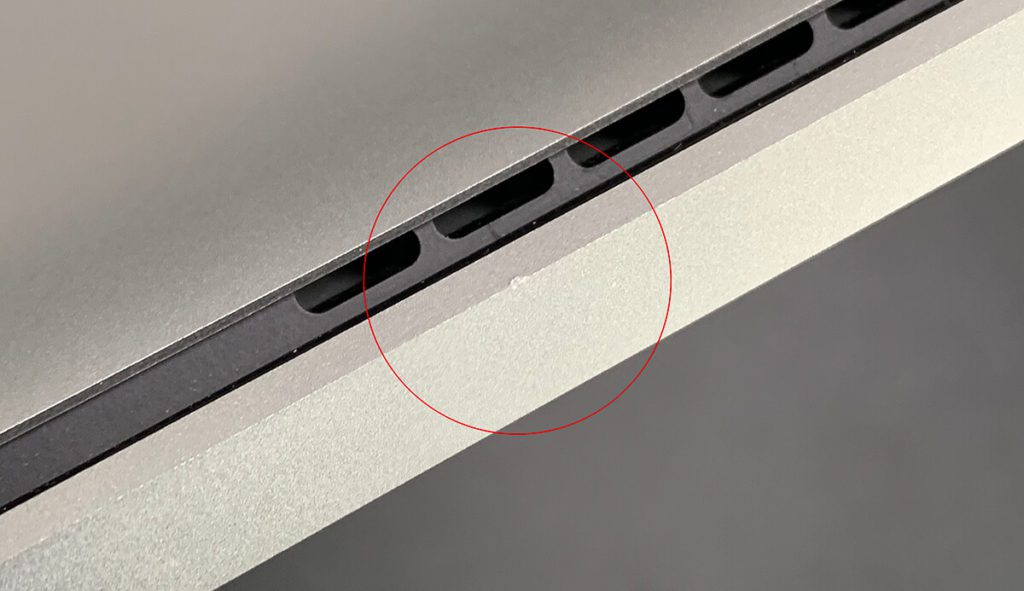 This tiny corner in the housing (at the back of the connection between body and cover) is the only thing that shows that you are not looking at any new goods. But you feel this quirk more than you can see it. 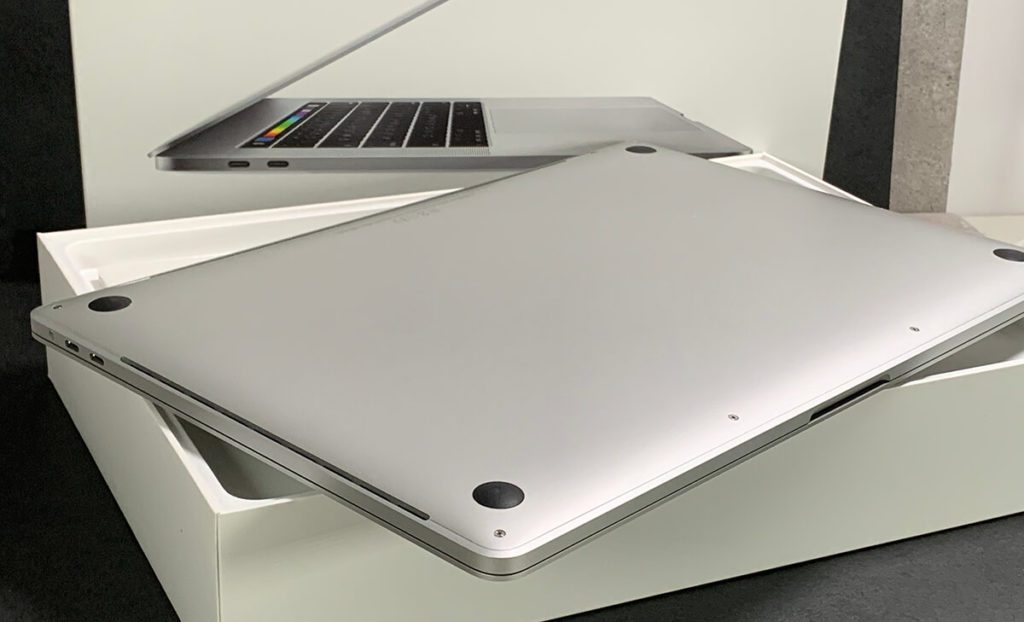 Not a single scratch or the like could be seen on the underside. Even the black plastic elements for parking were hardly visible.

Why the gap between the body and the lid is important ...

An important feature that I always check is the gap between the "body" and the lid when it is closed. The lid of my MacBook stayed slightly open and at some point I saw that the bottom was also slightly arched. The reason was a defective battery, but Apple - together Keyboard and logic board - on Warranty has exchanged.

You can already tell from such differences in the gap that something is "on the way" with the battery. If I had found something there, the device would have been sent back directly. Of course you can always be unlucky and something happens after the end of the warranty, but especially in the first year you should keep your eyes open so that you can report the things to the dealer in good time. 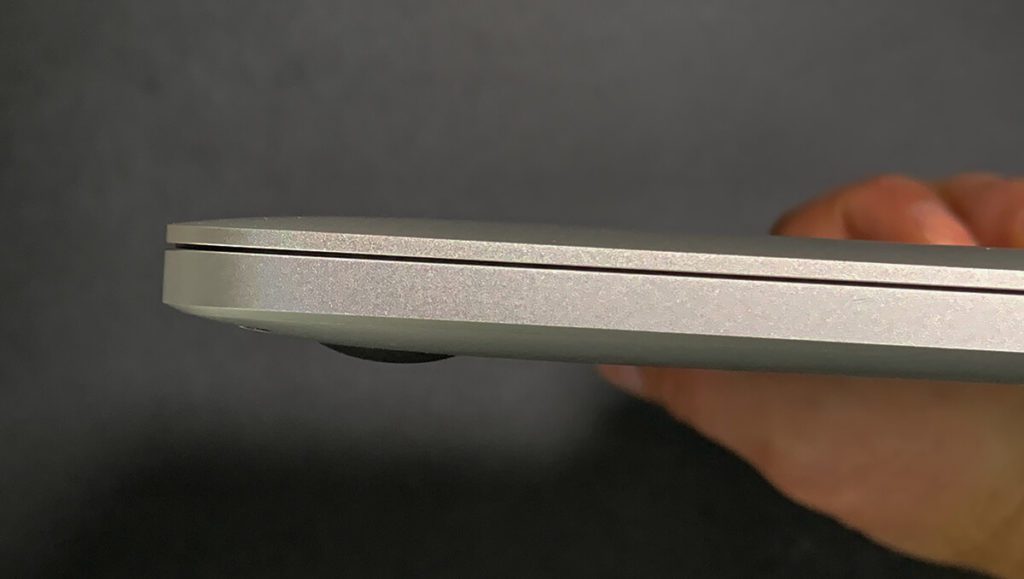 If the gap tapers or widens to one side, you should see whether there are any problems with the battery (photos: Sir Apfelot).

The MacBook Pro was my first purchase from Maconline. Everything went very well, from the search to the order and delivery. So I can pass on my reader's recommendation without hesitation.

What I particularly like about Maconline is the specialization in Apple products. Here you won't find everything from DSLR cameras to switch game consoles, only Apple devices. I don't want to deny the other used dealers the good service, but I think that the employees at Maconline already have more expertise, as they only deal with Apple computers, tablets and smartphones. 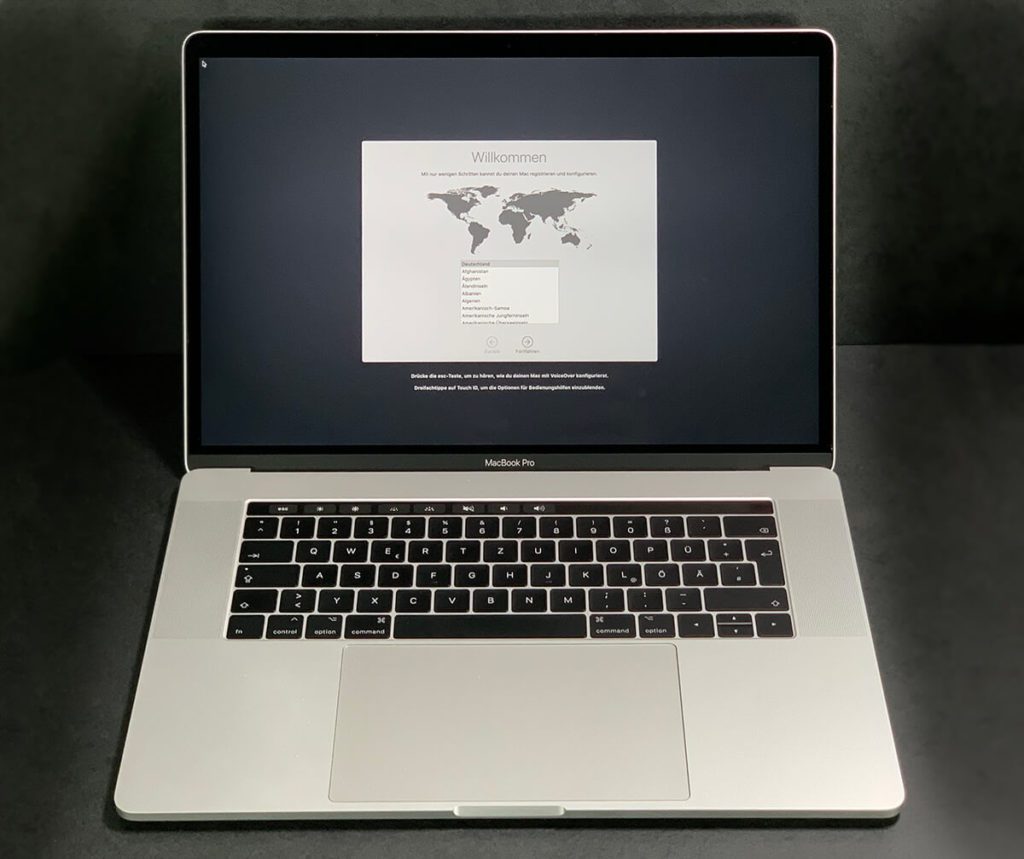 The MacBook Pro was delivered like Apple: If you start it, the installation starts and you can set it up.

The fact that a statement is made about the health of the battery for every device and that the battery may be replaced before it is sold also gives me confidence. I think this is where you get Apple devices that have been properly checked before they go on sale.

If you have made experiences with Maconline or other used dealers, I would be happy if you briefly describe them as a comment.