MacBook Pro shows vertical stripes or shadows on the display

I recently had an article on that Using an old iMac as a secondary monitor. Today's reader question from Marina fits in well with the topic, because she is also about an old Mac: namely a MacBook Pro from 2007, which she affectionately calls "Methuselah". After 12 years of loyal service, the display of the MacBook Pro is now showing the first problems in the form of shadows that run in strips from bottom to top.

In the photo you can see what I mean. You have to think away from the checked pattern, because this is a moiré pattern (see Wiki), which is more common when photographing monitors and displays. 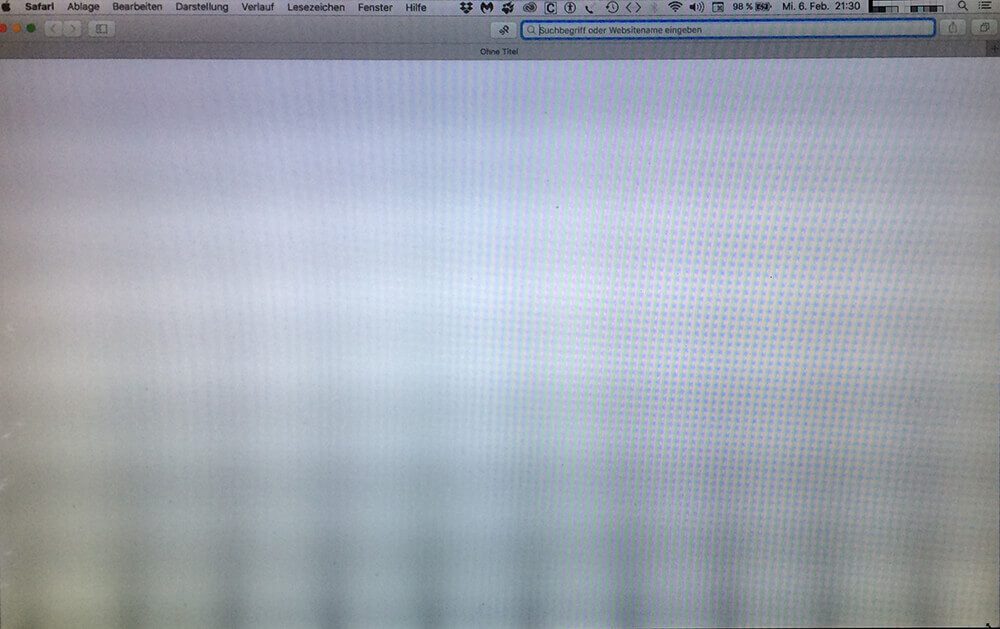 The display of the MacBook Pro shows lighter and darker areas that run like stripes from bottom to top (Photo: Reader Marina).

The question my reader asked me was whether this streak problem is known and whether it can be fixed by software or by repair.

While researching these stripes on the Mac display, I came across different characteristics and suggested solutions, which I would like to briefly summarize for you here.

Errors that can be seen as clearly defined lines or patterns can be assumed to be either software problems - such as a defective driver - or errors related to the graphics card, the logic board (see here.) or the ribbon cable. The ribbon cable connects the bottom and top of the MacBook Pro and is exposed to constant mechanical stress when it is opened and closed.After many years, it may have a loose connection or a broken cable, which then leads to display errors.

The vertical shadows my reader's Mac has are more of a blurred defect. This indicates a hardware problem directly with the display. This means that the graphics card delivers a correct image signal, but the display itself has a problem with the backlight, sticking or the like and does not display the image correctly. In some cases the image is displayed correctly, but is covered by discoloration, spots or shadows.

If you want to find out exactly where the error is, there is a simple way to isolate the source of the error: Connect an external monitor to the Mac. If the image error also occurs there, then the graphics card is already delivering a faulty signal. So it is probably a problem with a driver or the graphics card or logic board is defective.

If the error does not occur on an external monitor, on the other hand, it can be assumed that the problem is either with the ribbon cable in the folding mechanism of the MacBook Pro or directly with the display itself.

Solutions for troubleshooting or repair

Repairing hardware from 2007 is generally a bit difficult, because Apple itself and Apple's service partners such as Gravis or similar cannot carry out repairs, as there are no spare parts for these old Mac models.

If you know a hobbyist personally, you could buy a defective Mac model of the same type on eBay or other classifieds markets and then use the spare part from this device. But here there is the risk that you will have the same error again in a short time, because the hardware used is also not much younger than your own Mac.

In various forums I could read that an SMC reset has already improved some of the display problems. Of course, this only applies to software-related problems. Since you can't go wrong with that, I would recommend the SMC reset if in doubt, just do it once (hold down Command + Option (ALT) + Esc (ON / OFF) keys when restarting).

In the Macuser forum there is also A thread, which recommends replacing the graphics card with a second revision model in the event of an iMac display failure. Since the graphics card is firmly soldered, you have to have a bit of manual and electronic skills. The iMac model series MC814D / A from mid-2011 seems to be affected across the board, as a faulty AMD Radeon HD 6970 graphics card was installed there. Apple had an exchange program running back then that was valid until 2015, but anyone who is currently struggling with this problem is looking down the drain.

In the weekly newsreel KW 4/2019 I had a short reference to the "Flexgate", under which the display problems on newer MacBook Pro models (2016 and newer) are summarized. It will, according to one Report from iFixit, the defect can be traced back to the ribbon cable, which is bent over and over again when the MacBook is opened and closed. If the cable gets the first hairline cracks, the "stage light effect" or "stage light effect" occurs, as you can see in this video here:

As soon as the cable takes even more damage, the screen flickers and ultimately a total failure, so that the MacBook Pro can only be operated on an external monitor to back up the data. According to iFixit, the main problem is that the ribbon cable is unfortunately permanently connected to the display unit, so that you can only replace the entire display. If it were individually replaceable, it would be a repair with material costs of 6 USD - but you have to replace the entire display, which costs around 600 USD.