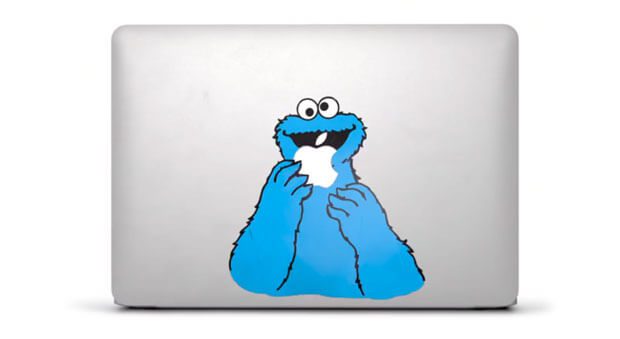 You are the proud (of course!) Owner of an Apple MacBook (Pro retina ?!). Maybe it already has a few unsightly scratches on the lid or you want to prevent it from getting that far. An Apple MacBook decal sticker, as you may have seen here and there on other Apple laptops, will serve you well here. These design stickers for the MacBook cover are made of a special film that can be easily attached to the cover of the MacBook Apple, but of course can also be glued to the Pro and Air models. I assume Apple co-founder Steve Jobs (wiki) would turn in his grave, since he preferred absolute minimalism.

No more glowing apples behind the laptop stickers

Unfortunately, at some point (see T3N article) decided that the bitten apple on the back of the lid will no longer be illuminated. So some wacky stickers like the ones with Star Wars and things like that no longer work where the glowing apple was part of the overall sticker creation. The advantage, however, is that you can use the stickers for the small MacBooks as well as for the MacBook Air and MacBook Pro models.

One of the hundreds of MacBook decal designs from the Apple commercial: Grobi (Photo: screenshot from the YouTube video).

Can the sticker be removed from the Apple notebook without leaving any residue? Most of the time yes!

Ok, I admit, the idea of ​​sticking something on the all-aluminum cover of your beloved MacBook Pro or Air is a bit strange, because it somehow "strongly influences" the design, but ultimately you can with the sticker take another small step in the direction of "individuality", where as an Apple user you are really nothing special anymore.

But you don't have to be afraid of having to use a sticker or decal once you have chosen it on your Apple laptop for a lifetime. If you don't like one of the MacBook stickers anymore, you can usually peel it off without leaving any residue and replace it with another one from the huge range of stickers. If a sticker was to be removed again, I would turn a hair dryer on low and use it to warm the sticker before peeling it off.

Rare side effects: adhesive residue after removing the sticker

With some manufacturers (and certainly also influenced by the length of time the stickers were stuck to the MacBook), adhesive residues seem to remain here and there on the lid. These can be removed better with cooking oil (old housewife trick!) Than with alcohol or spirits. You should be careful with solvents anyway: The aluminum from the casing of the MacBook Pro and MacBook Air laptops is certainly not affected by the solvent, but most of the time the Macbook sticker sticks near or partially over the apple and it is made of plastic and may react very allergic to solvents.

Who has the choice ... ... or would you prefer to design it yourself?

There is the right MacBook sticker for every taste - you probably already know a few classics like Homer, Snow White, Darth Vader or Grobi. But you can of course also create your own individual sticker with photos, texts and graphics. This MacBook sticker listing by designskins.com is also a nice gift idea if you want to give an Apple nerd a present. But you should know which model your Apple laptop is, because on the Designskins website you don't just have to choose between models like iBook, The new MacBook 12 inch Retina, MacBook Air 11 inch, MacBook Air 13 inch, MacBook Pro 13 inch , MacBook Pro 15 inch / Retina or MacBook Pro 17 inch but also differentiate between the model series so that the decal sticker fits 100% on the lid.

Unfortunately, I couldn't find any MacBook stickers there that also included the illuminated apple in the motif. Most of the stickers there cover the entire lid. Of course, this loses a bit of the joke - but you can design individual stickers. And as you may have noticed: Apple has said goodbye to the shining apple in order to use the energy sensibly for a long battery life. The new MacBook models no longer have a shiny apple.

All laptop decal stickers are made from high quality vinyl. Attaching it to your MacBook is very easy. You can also remove any MacBook sticker from your Macbook at any time without leaving any residue. There are no scratches and no adhesive residue remains on the lid. At least that is what the manufacturer assures. I haven't been able to try it out ... I just can't decide which motif I would like to have. ;) 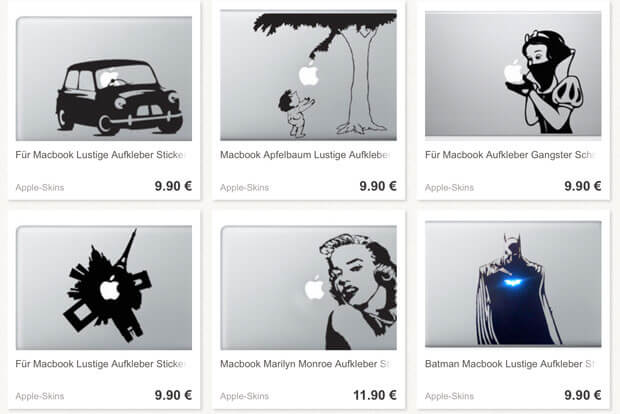 At Dawanda.de you will also find plenty of offers on the subject of MacBook lid stickers. Here I think some stickers are very successful! (Source: Dawanda)

At the portal dawanda on the other hand, there are 172 stickers that are ideal for the MacBook and that also include the apple nicely. With 9,90 EUR these Macbook stickers are also quite affordable ...

The Dawanda assortment includes, among other things, the motifs "DO WHAT YOU WANT", Africa (the apple is taped off so that only the outline of Africa remains white), eyelashes (these are two black eyelashes that you can either put on the The cover can be glued or to the right and left of the trackpad), edelweiss (something for the climbers among you), deer (something for hunters or drunkards) or nice motifs like a spot with shining eyes, cannabis and many other motifs.

If you want to glue the entire casing of your MacBook, you will also find MacBook stickers in a marble look, which you can also stick over the curves. The wooden case for the MacBook, which can be found in the product listing, is not a sticker but actually made of real wood!

Also in the Amazon shop: a selection of stickers to buy

For friends of the Marvel Comics there are different motifs that can be bought in the Amazon online shop. The one that particularly catches the eye here Iron Man sticker - just the thing. The sticker with the Marvel characters, on the other hand, is rated poorly because it does not omit the Apple logo, as the picture suggests. So it is more of a "normal" kind of laptop skin.

The is also very popular and top-rated Sticker with the pistol shotwho practically shoots through the apple. It is practical that it is suitable for all MacBook sizes from 11 inches, 13 inches, 15 inches up to 17 inches.

For fans of the series "Breaking Bad" there is the motif "Heisenberg", which is available in black or white for different MacBook models. You can find the Heisenberg sticker here in the shop.

It looks very colorful MacBook Decal Snow White Sticker. I really like the fact that Snow White is holding the apple in her hands. By the way, this sticker is the Amazon bestseller in the "Skin Stickers" category. Due to the motif, however, it is only suitable for 13-inch MacBooks. 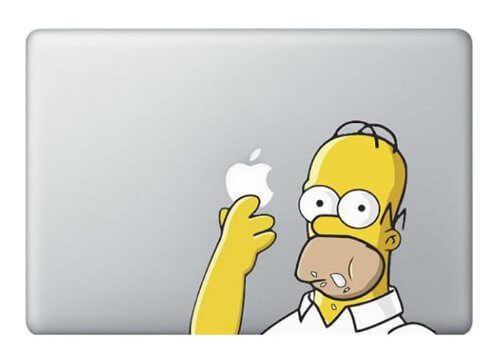 One of my favorite Macbook sticker favorites: Homer Simpson nibbled on an apple (Photo: Amazon).

Many other cartoon characters were also chosen as the motif for the stickers. Let's just think of Bugs Bunny, Snoopy, and of course Scrat from Ice Age. Again, Scrat holds the apple in his hand - just like the nut in the films. And of course that is a real hit Homer stickerwho then looks like Homer Simpson has just bitten the apple.

Interesting: A jump in sales after Apple Spot

In July 2014, Apple released one Commercial for the Macbook Air - or for the MacBook sticker - depending on how you see it. In this spot, more than 70 MacBook Pro stickers were shown, which make a Macbook something individual. You can buy a large part of the stickers from the dealers we have introduced above.

Interesting fact: Many of the retailers speak of a significant increase in the number of visitors to their pages since the Apple sticker spot was published. Usually 8 to 10 stickers per day were sold per retailer at prices of 3 to 8 euros. After the advertising campaign had been broadcast, 40 to 50 Macbook stickers were easily sold over the virtual sales counter a day. After the commercial started, the number of visitors increased on the websites of the dealers in some cases by 40 times. You can see how effective advertising can be. :)

If you want to see how to best apply the sticker to your MacBook, I can tell you this video on youtube recommend. And if you want to watch the Apple spot again, you can run it here:

Ever heard of keyboard stickers? I haven't so far, but now I know what that is: Stickers are offered that are stuck to the individual keys of the Mac. You can either do this to protect the keyboard, or to add a different keyboard layout or special characters on the keyboard (e.g. Russian or Arabic). A selection of such stickers for the keyboard can be found here at Amazon.

Vinyl decals for the trackpad

I also found the stickers that can be stuck on the left and right of the trackpad of the MacBook to be mentioned. They are black and made of vinyl. There are of course various motifs from Snoopy to the Apple VW T1 bus. A selection can be found here. The price is around 8 €.