The latest update for macos catalina with version number 10.15.5 was automatically installed for me tonight. I have no objection to such small updates, but I'm still interested in what the respective update for functions or updates brings with it.

Basically you can say in advance that this update is recommended for all users, as it also brings security updates and - at least for me - there are no problems with use.

The update to 10.15.5 went through almost unnoticed during the night.

For users of the MacBook Pro and MacBook Air (or the old MacBook) models, 10.15.5 has added an interesting new feature to the system. Apple calls this somewhat unwieldy as "battery status management". Here you can find the appropriate support document from Apple.

Actually, this is an automatic optimization of the battery in order to increase its service life. I got the idea behind it here in the earlier article about the "Battery Health Management“Received.

Intelligent charging based on usage patterns

Based on previous use, the function recognizes when it makes sense not to fully charge the battery up to 100% and then stops charging before this value is reached, which has a positive effect on battery health, because the 100% mark is constantly maintained accelerates the chemical aging of the battery cells.

This is also helpful for people for whom the MacBook hangs on the charging cable most of the time, because this continuous charging is actually not beneficial for the life of the battery. Programs like FruitJuice would like to help here, but none of these tools survived permanently because I was always too lazy to unplug the MacBook and then plug it in again when it was time. 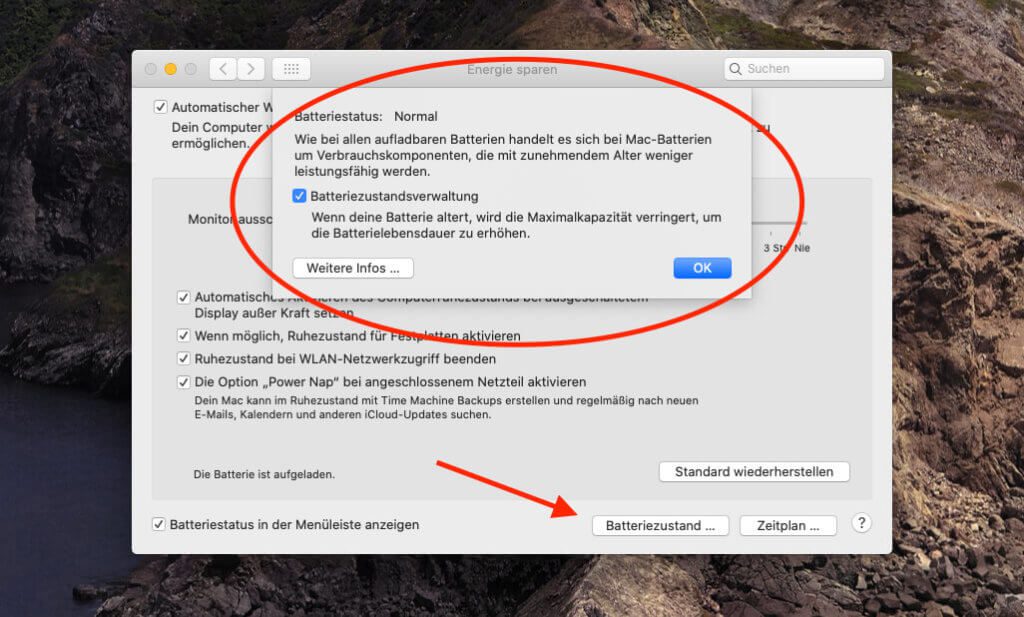 New in macOS 10.15.5: The automatic optimization of the charging to improve the battery health.

In this sense, I am glad that Apple has built an automatic into the system that takes care of such things. And for everyone who has complained about the iPhone brakes, there is also a switch here under System Settings> Save Energy> Battery Status to deactivate the battery status management.

A reader has just pointed out to me that im Apple Forum is a post, in which one reader pointed out that they couldn't find an option for battery management on their 2013 MacBook Pro. Another wrote that he had heard this message from several people who have MacBook Air models built before 2017.

I have seen several posts from MacBook Air owners (2017 & Older) that they could not locate the feature. Not clear on what Apple had intended, however you are not alone.

Apple itself has not yet issued a statement, but I assume that there are technical limitations so that only new MacBook models support the feature. As soon as there is an official statement from Apple, I will add it here.

Apple itself does not provide any information about which security vulnerabilities were specifically addressed with the update, but it seems that with macOS 10.15.5 the iOS jailbreak "unc0ver" should be undermined.

This was based on the fact that programming code could be executed with kernel rights and in this way the jailbreak could be carried out. The recently widespread iOS 13.5.1 also intervenes here and is intended to prevent unc0ver jailbreak.

The unc0ver jailbreak was only recently developed, but will be disabled with the new iOS.

If you are now wondering whether the security problem of Apple Mail is solved, you can sit back and relax. The error does not exist in macOS and therefore cannot be fixed with the macOS update, but at the same time Apple released the iOS update to 13.5 or 13.5.1, which the heavily criticized security hole in iPhone and iPad should have closed according to Apple.