macOS Big Sur 11.3 update available - you should know that

The new update to macOS 11.3 has been available for the Mac operating system macOS Big Sur for a few days. For me it was only suggested yesterday by the Mac itself and appeared as a red pin next to the system extensions. I'm a few days "late" for reporting again, but I like to write my own experiences with the update in the article. So I hope you can get over the delay.

The new macOS 11.3 update also contains security updates, so from my point of view it is an important update.

macOS 11.3 installation without side effects

I installed the new macOS last night and so far I have not seen any problems worth mentioning. Here are a few things that I noticed during the installation:

Otherwise everything works as before and shows no strange side effects. If something strange happened to you, I would appreciate your feedback as a comment. This often helps other readers to classify errors on their Mac. 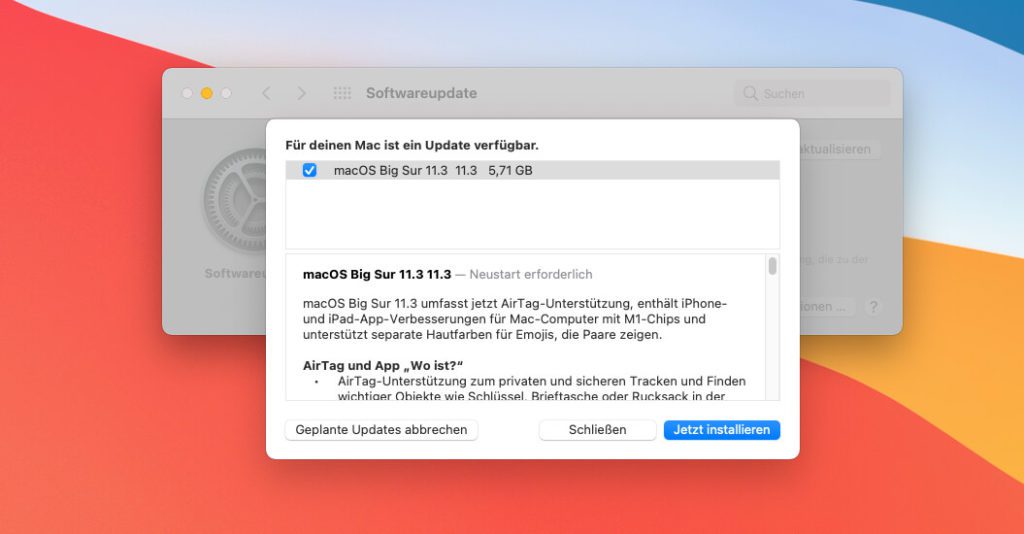 Apple also informs about the new features of the update for macOS 11.3.

Apple itself provides the following text with the new features for the update:

AirTag and app "Where is?"

iPhone and iPad apps on Mac computers with the M1 chip

Mac computer with an M1 chip

Some features may not be available in all countries or regions, or on all Apple devices, and require an Apple ID.

You can find detailed information about this update on the following website: https://support.apple.com/kb/HT211896

There are also a number of bug fixes and corrections to system functions such as gatekeepers and file quarantine. These errors made it possible, for example, to execute malicious code on the Mac.

Most of the time, the Mac already shows the available update with a red pin next to the system extensions in the dock.

Actually, it probably doesn't need any more instructions, as most Mac users already know how it works. For the Mac newbies, I would like to briefly mention it here:

My conclusion on the macOS Big Sur 11.3 update

I would see it as an important update that should be installed, if only because of the security bug fixes. For everyone who already has one Pack AirTags ordered it is a prerequisite to be able to use the Apple trackers on the Mac anyway.

Since nothing failed or showed any problems after the update, I tend to recommend an installation. If something went wrong with you, please leave a comment.