Install macOS Big Sur? Bombich Software advises against for the time being! 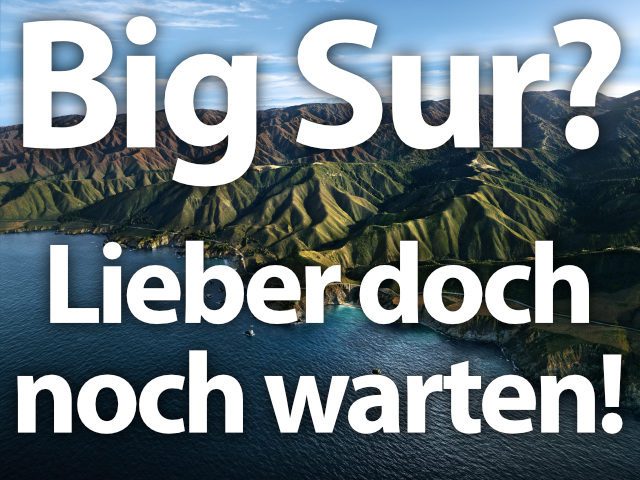 With Carbon Copy Cloner (CCC) you can easily create backups of your Mac hard drive. The developers behind the tool have now advised against an early macOS Big Sur installation. In this article I will go into the reasons that were sent to customers and partners of Bombich Software, the makers of CCC, went out. General information about macOS 11.0 Big Sur you can find here; a contribution with previously known or expected problems of the new system on the Apple Mac can be found here.

Bombich Software, the developers behind Carbon Copy Cloner, currently advise against upgrading to macOS 11.0 Big Sur. There are still errors in the system that Apple must correct by means of an update.

For next Tuesday, November 10, 2020, Apple has announced the “One more thing” event announced. The thing is most likely new Mac models. This will then also roll out macOS 11.0 Big Sur. But you should install the new operating system directly on existing, compatible Macs to install? According to Bombich Software: No. And these are the reasons given in summary:

Should I upgrade my Apple Mac to macOS 11.0 Big Sur?

There is a separate paragraph on this question in the email from the makers of Carbon Copy Cloner. Because in addition to the specific problems for backup software, for which Apple still has to provide a solution, there are also general points that must be observed. Here are the questions that you should ask yourself before switching from the last "Mac OS X" version to "macOS 11":

Are you an early bird or a late adopter?

Will you get macOS 11.0 Big Sur when it becomes available? Or do you prefer to wait for a few updates, as advised above, before installing the new operating system on a compatible Mac, iMac or MacBook? Feel free to leave a comment with your planned approach;)