macOS Big Sur Update 11.2.3 available - the most important things in a nutshell

With a size of 3,4 GB, Apple made the next update available for the Mac less than two weeks after the update from macOS 11.2.2. The reason why this happens so quickly is probably the security hole that will be closed with the new macOS update. 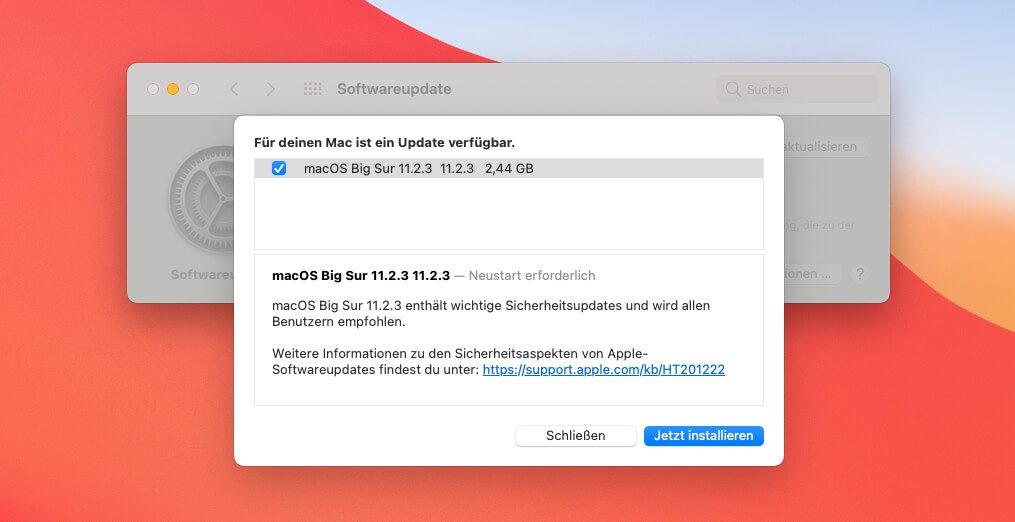 Big Sur's update to macOS 11.2.3 is above all a security update that fills a gap in Webkit.

Apple itself describes macOS Big Sur 11.2.3 as an "important security update" and recommends it to all users who have installed macOS Big Sur on their Mac.

The main aim here is to iron out a security gap that made it possible to attack browsers by making certain web content available. This led to a memory corruption and then allowed any scripts to be run on the Mac (if I understood it correctly with my technical knowledge). Details can be found on an Apple support site called HT212220.

With a size of over 3 GB and an installation time of approx. 45 minutes, the security update is not even done quickly on the side.

Over 3 GB not just for Safari

Many users complain in forums about an update of over 3 gigabytes that obviously only updates the Apple browser Safari. In fact, other components are also brought up to date. For example Javascript, ImageIO, various frameworks and also graphics card drivers for Apple and Intel GPUs. This can quickly add up to 3 gigabytes.

For me, everything continued to run normally after the macOS update to 11.2.3 - so there is no reason to hesitate.

Problems after the update? Not at my place…

I just installed the update a few days after it was released. The process took about 1 minutes including loading on my MacBook Pro M45 and then the MacBook Pro wanted to restart.

So far, I haven't noticed any strange behavior after the update. So, from my point of view, I would say: You can do the update. However, to be on the safe side, you should always have a backup available - just in case something should go wrong in the process.

As a rule, however, there are no bad things to worry about with such point-to-point updates. They tend to happen with major updates, such as from Catalina to Big Sur or similar upgrades.