macOS Catalina 10.15.6 - my experience with the update

The complementary Update to macOS Catalina 10.15.6 came out of Apple yesterday. The notes say that it is supposed to fix crashes that occurred with virtualization software like VMware Fusion or Parallels Desktop. The update also addresses display errors that appeared especially with the 5K iMac from 2020 when it wakes up from sleep and also connection problems that existed with USB trackpads and mice.

In the notes of the installer you can read it like this:

It fixes a stability issue that can occur when running virtualization apps. 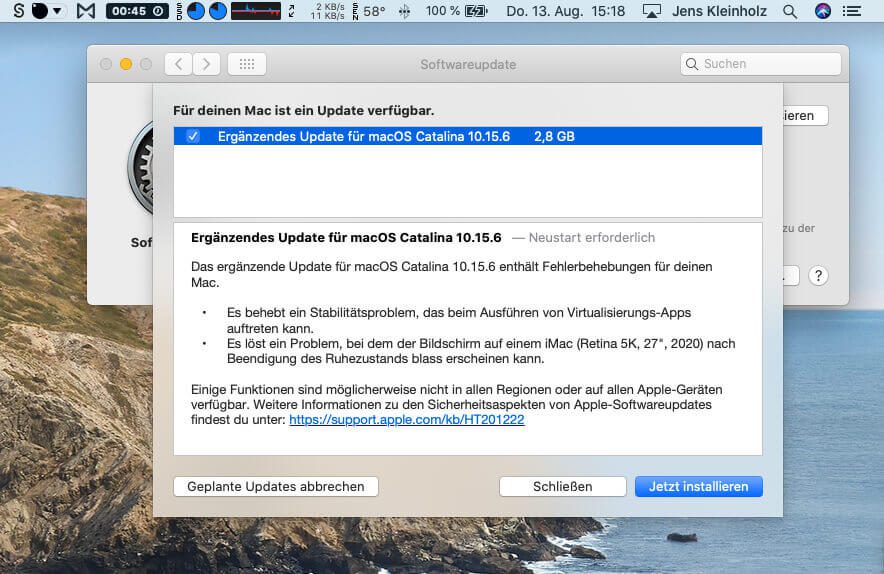 In the macOS updater window, you will be briefly informed about the changes in advance. The details can be found via a link to the Apple Support page.

But there has been a little more done how to do it here at Apple can read:

The update also includes bug fixes and other improvements.

The size of the update file is almost 3 GB and, in my opinion, is quite extensive. The complete macOS Catalina installer, for example, only has 7,5 GB, so I am very surprised by the capacity of this small upgrade.

You can find software updates for macOS via the system settings in the Finder.

Most Macs are set to update automatically. But if you want to trigger it manually, the path leads over System settings> Software update.

There you start the update and then have to reboot the Mac. The update ran for a good 15 to 20 minutes before I was able to use my MacBook Pro again.

I've had a number of times lately where Parallels Desktop said goodbye in the background. My hope was that the update would fix this, but unfortunately it doesn't. My Parallels Desktop only ran a few minutes and then hung up when I was using other programs in the foreground. 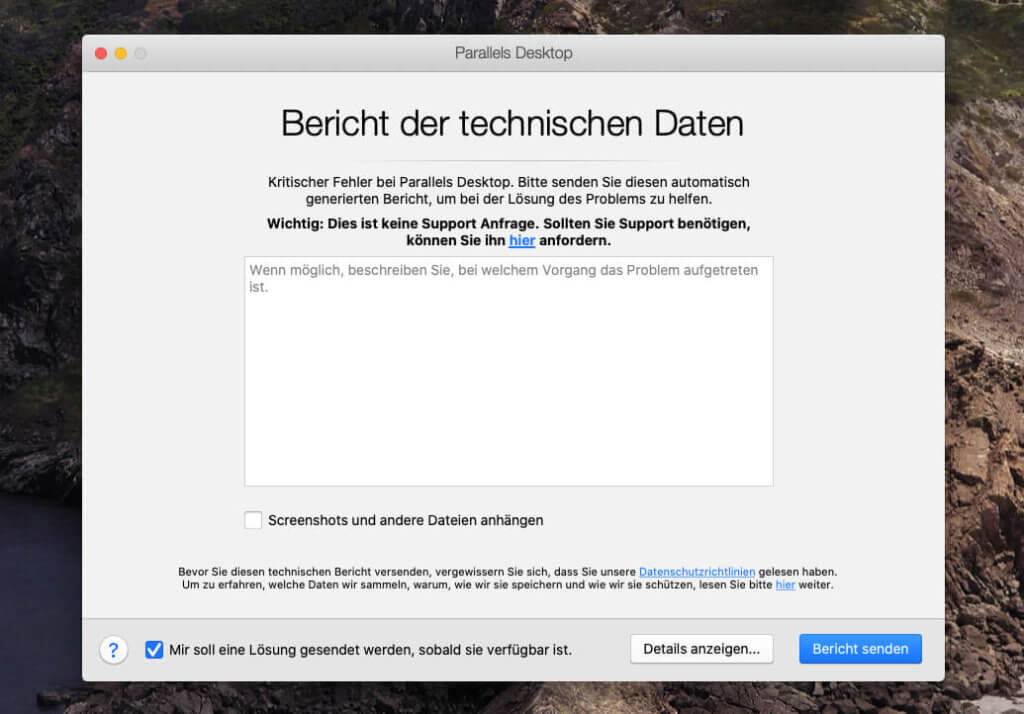 Parallels Desktop has been greeting me with this crash report for about one or two weeks when the software was running in the background for a while and I was working with other programs.

As I could read in forums, the update to 10.15.4 resulted in a few that macOS could no longer boot. The solution back then was to unplug all USB devices and restart the Mac without any peripherals.

As far as I could read, no such case occurred with the current update to 10.15.6. However, it is always a good idea to make a backup before upgrading your system.

In my case, there were simply no noticeable changes. Parallels Desktop bugs that existed before are still running. ;-)

And Parallels diligently urges me every time I start the software that I should download the new version that is compatible with Big Sur. Sooner or later I'll do that, but the constantly recurring popup is extremely annoying ...

The software update control panel can be found in the system settings, which can be used to manually initiate the update to macOS 10.15.6.

The new major update of macOS to version 10.16 "Big Sur" will probably come at the end of September. I think this minor update may be the last update to macOS Catalina before the new system comes out. And I'm really looking forward to Big Sur.

Here you will clearly notice that macOS is switching strongly towards iOS, which I am personally very happy about.

If the update to 10.15.6 caused problems for you, I would be happy if you could leave a little description of the error here as a comment for the other readers. Thanks!