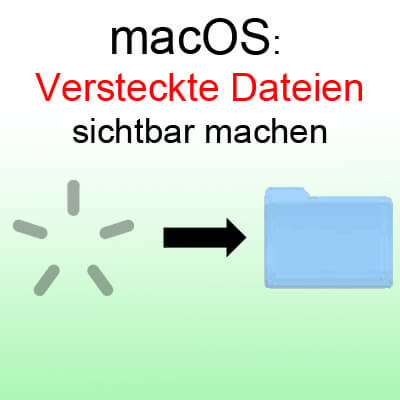 If you guys show hidden files under macOS Sierra 10.12 you don't necessarily need a tool like Onyx or TinkerTool, just a simple key combination. The shortcut consisting of the command key, shift key and period in the Finder means that you can display hidden files and folders. This can be quite helpful in both macOS Sierra system folders and program folders.

As you can see in the picture, you simply press the key combination CMD + Shift + point. This saves you the detour via additional programs or the terminal. Of course, you can also achieve your goal with Onyx or TinkerTool and use other features, but if you are only looking for hidden files, then the shortcut shown is sufficient. Just try the whole thing in a system folder - or hide a file or folder yourself. With CMD, Shift and Dot everything is displayed.

However, it may also be necessary not only to show the hidden files and folders, but also to hide them again. For example, because children also use the Mac or MacBook and like to move, rename, delete folders or do other experiments. Free trial and error on the computer can build up a lot of knowledge (I speak from 20 years of experience), but you also learn from many mistakes (ditto);) So if you have important work folders that should not be used, then you can Hiding also helps - or just a regular one Backup.

Do you sometimes operate on programs or on the system and have to display hidden files and folders? How do you do it under OS X and macOS; with the keyboard shortcut, a tool or the terminal? Feel free to leave a comment :)