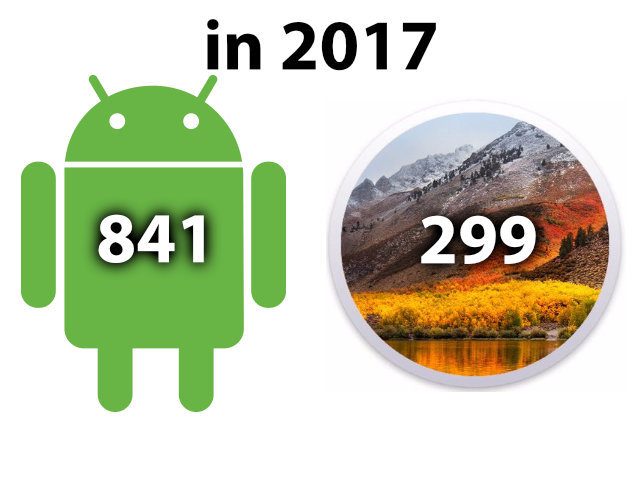 With appeal CVE details effect The report of Statista published a summary of the vulnerabilities found in various operating systems in 2017. Desktop operating systems such as macOS, Linux Kernel or Windows / Windows Server as well as one or the other mobile operating system such as iOS and Android are listed. What is noticeable here: Android is the undisputed number 841 with 850 holes, i.e. almost 1 points of attack for viruses, Trojans and hackers! ;) 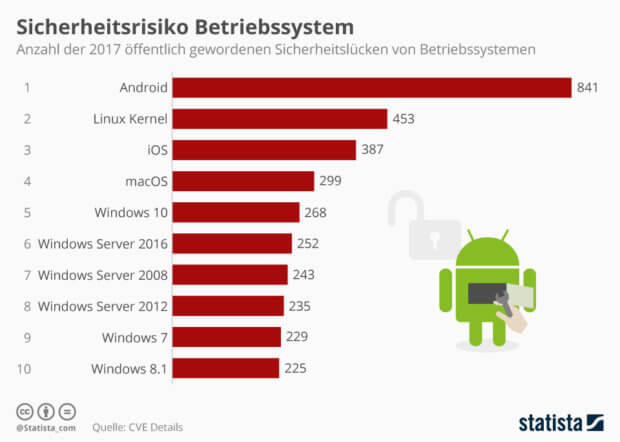 As you can see on Statista's infographic, Android tops the list for 2017 with 841 vulnerabilities found. The Linux kernel is somewhat more secure with 453 holes. The mobile operating system of Apple iPhone and Apple iPad, namely iOS, counted less than half of the Google Android gaps in the last year. The desktop operating system macOS for Mac, iMac and MacBook had only 299 holes - Microsoft Windows 10 surprisingly with 268 fewer (found) vulnerabilities ... Windows 7, Windows 8.1 and the server versions of the OS are still behind.

Statistics for 2018 and the All Time Leaders

On the website of CVE Details (according to own information "The Ultimate Security Vulnerability Datasource") you will not only find the overview for 2017which also includes apps and devices like the Safari browser, Apple TV, iTunes and so on, but even current statistics for 2018 and the all time leaders of the top 50 products with security vulnerabilities. Below is a small top 10 list of evergreens

There are many approaches to interpreting the information provided by CVE details or for or against a particular product / system. In addition to the numbers, it is important to know the reasons for the security gaps and points of attack, as well as how to deal with them. Apple, for example, is pretty quick to respond to security concerns and loopholes in an OS like iOS, macOS, tvOS, and watchOS. Updates can be quickly rolled out to all users thanks to the factory linking of hardware and software. Patches, fixes and upgrades as well.

If, on the other hand, you take Google Android or Microsoft Windows as an example, it usually takes a lot longer for a fix or patch to reach the user. This is due, among other things, to the various hardware models (notebooks, smartphones, tablets) to which the systems are adapted by the respective manufacturer. With Android this is even worse than with Windows - Google has to forward and process updates to the manufacturer and in some cases to the carrier / network operator. It can take weeks or months for something to come through; if something comes through.

Reasons for so many security leaks

But apart from Apple, Google and Microsoft, or looking at all of them as a whole: It is quite logical that (especially newer) operating systems keep showing more and more security leaks. Because the systems are becoming more and more complex, have to access more and more hardware and coordinate more and more computing power. On the one hand, the OS must be shielded against attacks, but at the same time remain accessible to app developers. All of this ensures that one or the other weak point naturally appears in the kilometer-long code of the OS. It's just a bit exaggerated with Android: D

Not only the number of security gaps in an operating system, but above all how the developer deals with them is important. Of course, a system should be as secure as possible from the start. However, errors can never be ruled out, especially when it comes to complex OS versions such as the current (and upcoming) ones. If you are only interested in the capabilities of the hardware and not in the software, then take a look at the Comparison of iPhone X and Xiaomi Mi Mix 2 ;)