Courage for the gap: macOS Mojave installed - my experiences 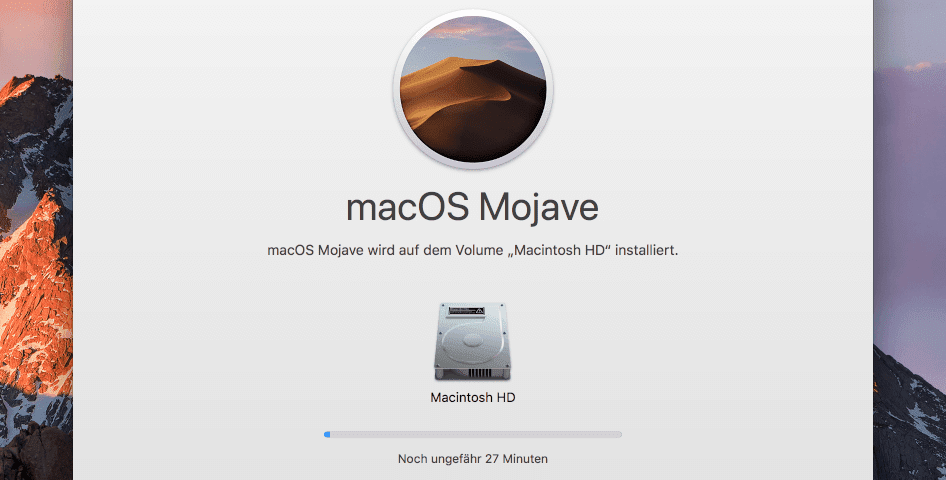 I have to admit, even if I have a relatively large number of programs on my MacBook Pro and need them for work, I always tend to update to new macOS systems quite early on. That might be a bit "brave" when you work productively on your Mac every day, but hey, that's not what I do skydiving for. : D

So it happened that the update to macOS Mojave found its way to my Mac while on vacation. I had already downloaded it and then installed it after a backup of the "Macintosh HD" system hard drive while on vacation. So I already had 1-2 hours to see what was crunching and creaking. The decision to install it while on vacation was perhaps not that bad, because you don't have to put both arms into work and you are so tight in terms of time. 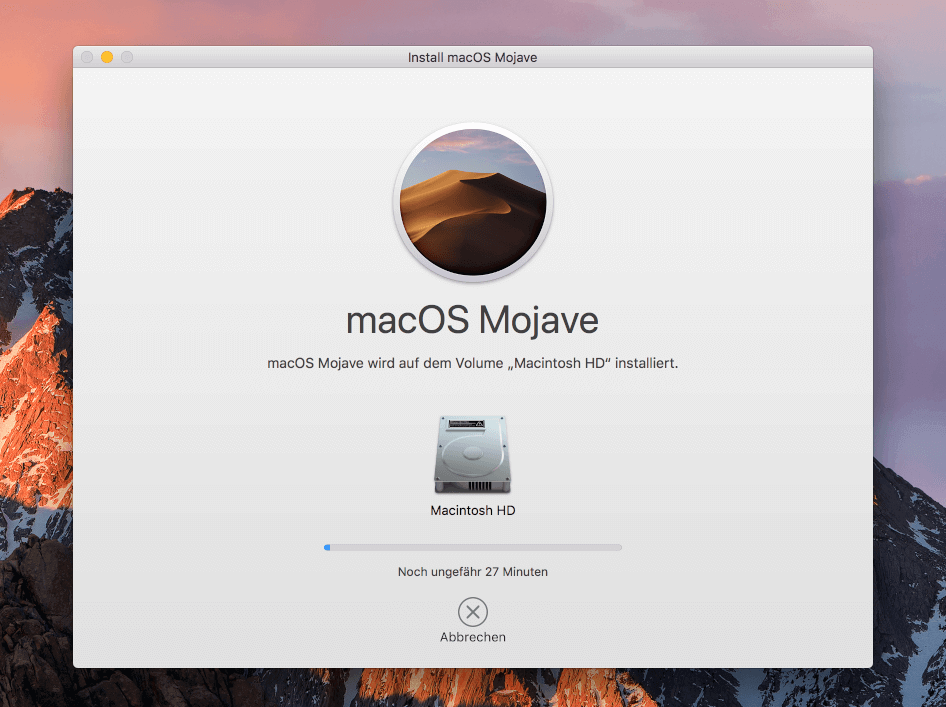 Fast installation: Mojave is installed on my system disk in 27 minutes.

The update from macOS High Sierra to Mojave was done quite quickly. Unfortunately, it took a few hours to load because I had a somewhat weak LTE network in Denmark. The installation, on the other hand, was unproblematic: the system was set up on the disk after a good 30 minutes.

The first important decision that you have to make after the restart is the choice between the normal "light theme" or Mojave's dark mode. I had used the dark theme at first, but after a few minutes I noticed that the view was still a bit too strange for me. Switching back to the "light theme" is not a problem in the system settings in the "General" control panel. There you will find the option "Appearance", which you can switch from light to dark or the other way around.

You can switch between the light and dark appearance in the system settings in the "General" area.

By the way, switching from dark back to light has the FirefoxBrowser Somewhat confused. Immediately afterwards, it only showed me white text on a white background in the search field. I also listed the issue here in the list of known issues with macOS Mojave, but in the end it was easily fixed with a restart.

I will possibly test the dark appearance again in the days when I have a little more time to get used to it. Immediately after the vacation there is usually a lot of work on the table and I need a familiar working environment. : D 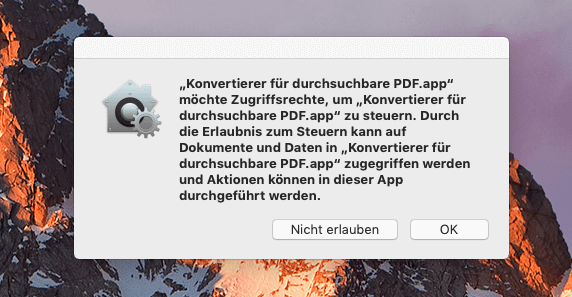 You should make sure to always use the latest version of software when upgrading to a new macOS.

The next little problem I had when I started MoneyMoney, my favorite banking program for the Mac. That threw me a hint that the version on my Mac is not compatible with Mojave. I still pressed "OK" and received an error message telling me that the application file was damaged and that I should reinstall MoneyMoney.

Hoping not to have lost all of the bank data I had collected over the years, I downloaded and installed the latest version from the manufacturer. After starting the software again, the usual view with bank statements came up and everything was still there.

An important point, which I was unfortunately only able to test after my vacation, was the compatibility of macOS Mojave with mine ScanSnap iX 500 sheet feeder scannerthat I use almost every day. When upgrading to macOS Sierra, Fujitsu made adjustments to the drivers left plenty of time and thus annoyed many users. So I didn't have good expectations, but luckily they were disappointed: The scanner does its job without grumbling and is fully compatible with the new macOS.

When I started Apple Mail for the first time, I received several messages, including my anti-spam plug-in SpamSieve. Programs that want to read or change data from other programs on the hard drive are no longer allowed to do so without the consent of the user.

For this reason, such apps have to be granted the appropriate rights once via System Settings -> Security -> Data Protection -> Full Access to Hard Drive. It might be a bit annoying at first, but I prefer it because then I can see which programs have which rights. And before you give a program "full access" to the hard drive, you should be sure that it is a legitimate piece of software. 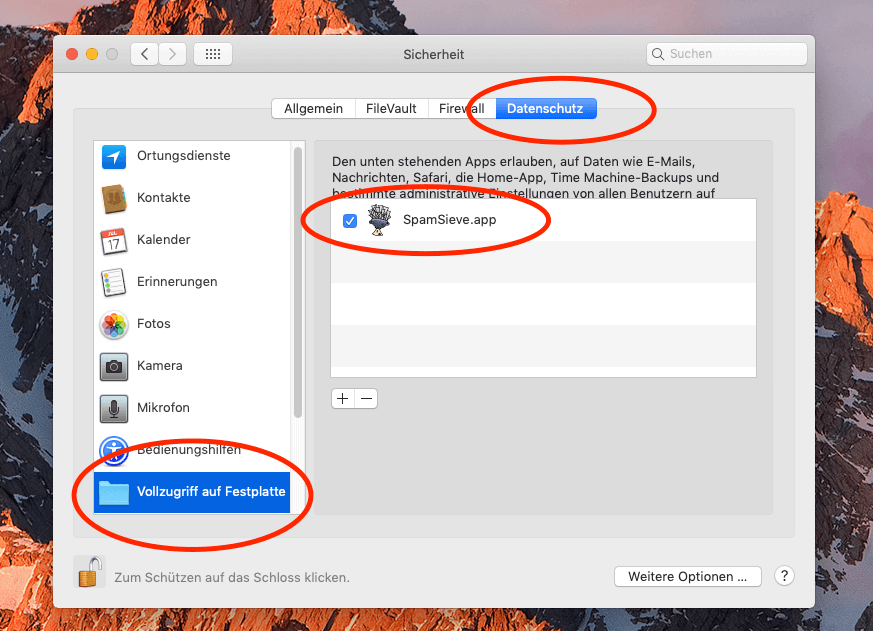 After upgrading to Mojave, Spamsieve needs permission to access the hard drive. However, programs should not be given this permission without hesitation.

I use the Mail Act-On plugin from SmallCubed as a little help to send emails delayed in Apple Mail. Unfortunately, this plugin is no longer compatible with Mojave, but the manufacturer warned weeks ago that this would be the case. So it didn't come as a surprise.

But the support is not completely discontinued, because in mid-October SmallCubed will release a "Mail Plugin Suite" that combines all of its plugins and is also Mojave compatible. So I'll have to do without the plugin for a good two weeks ...

Photos can only be opened in the photos app with the "Enter" key. Unfortunately, the space bar for Quick Look no longer works ... hopefully only temporarily until the next bug fix.

A bigger problem that I just noticed is the fact that in Apple's Photos app you can no longer hit the space bar to quickly preview a photo. Instead you have to press "Return" or "Enter" to see the photo in the viewer.

I'm just not sure if the change is a bug or if it is a desired change on the part of Apple. I very much hope that it is a bug and that we will have Quick Look in photos available again shortly.

Many questions in the first few days ...

Many beta testers of macOS Mojave have "complained" that you get accused of so many windows in which you have to give programs permission to do this or that. This is indeed correct, because in the first few days after the upgrade to macOS Mojave, such windows actually come up with many programs - sometimes even two or three per app - but these only appear once and only ask whether the respective Program may really be given the rights to do this or that. 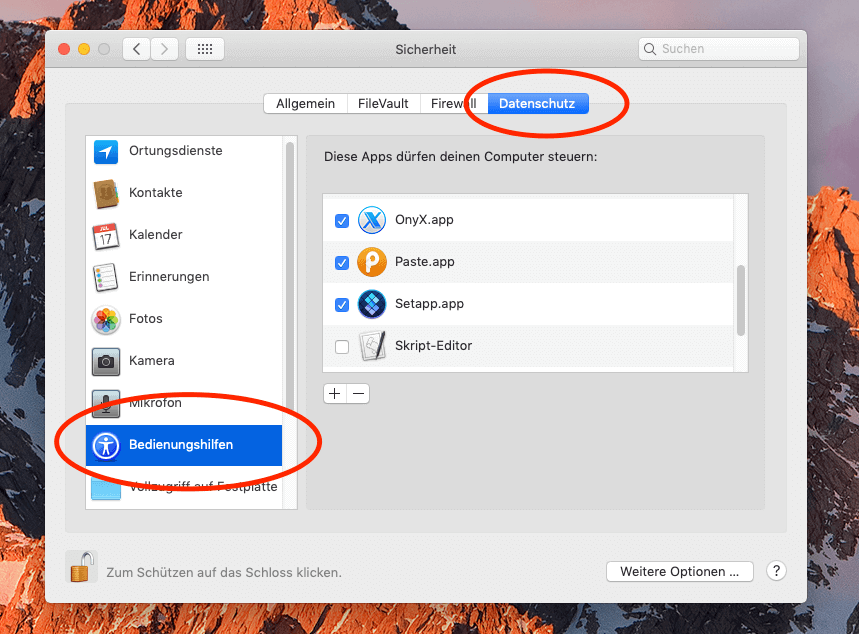 Paste, Setapp, OnyX and many other apps want various access rights and demand these under Mojave with notification windows.

From my point of view, this is a big step towards greater security and, above all, as a user you can now see exactly which apps want to access what. If suddenly a program to clean up the hard disk wants to access the camera, you should be puzzled. ;-)

I just hope that these questions will not be answered bluntly with "ok", but that the users will really read through what the respective programs want for access rights and may also reject them.

I have to admit that I haven't tried Mojave's many new features yet. The only thing I activated right away was the "Staples" function, with which you can get a little more order on your desk, since Mojave sorts the files into small stacks.

My desktop really tends to be flooded with screenshots, downloads, small text files or the like, and "stacks" give you at least a rough "basic order" on your desk.

More order on your desk with one click. The "Batch" function collects files on the desktop in piles according to file type or other criteria.

Another new function that I just noticed are the screenshots, which now appear right below after "snapping". With a right click on the small picture with the screenshot you can then quickly send it to various destinations such as Apple Mail or similar. 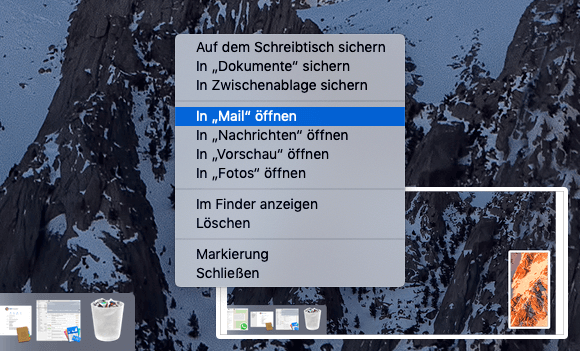 Screenshots appear briefly at the bottom right under Mojave and then allow interaction.

Conclusion: so far everything paletti!

That should first be a short experience report on the subject of Mojave. Because Mojave is more of a performance and stability upgrade, I didn't expect any major problems, but there is still always the risk that one or the other software will quit its service under the new macOS.

Due to the lack of support for 32-bit apps, the upcoming macOS after Mojave will probably cause a lot more problems, but we still have a year until then. : D

So my conclusion on macOS Mojave is consistently good. Everything went smoothly for me during the installation and the programs that I use every day don't throw up any errors. So I can give you a thumbs up if you have to decide whether or not to leave the new macOS on your Mac.

If you have discovered new, great features under Mojave that make your everyday life easier, I would be happy if you describe them in the comments! Other readers who have been waiting and who have not installed Mojave will also be "happy" about error messages or reports about incompatibilities.