Under a Magnet charging cable, or magnetic power supply, one can understand cables that either have a magnetic connector (such as Apple MagSafe on MacBook) or where the plug and cable are magnetically connected so that the end device does not have to have its own magnet. Since Apple's MagSafe, which was first introduced in 2006, is no longer used in new MacBook models, I would like to introduce you to a few magnetic charging cables; for USB-C on MacBook Pro 2016, Lightning on iPhone / iPad / iPod and also Micro-USB on Android smartphones, tablets, etc.

Magnetic charging cables with magnetic USB-C, Micro-USB or Lightning connectors can be found in this guide.

Since 2015, Apple's MacBook models are no longer available MagSafe, the magnetic plug of the power supply unit of the previous models. The MacBook Pro 2016 is the latest notebook from Cupertino and, like the MacBook 2015, it brings one USB-C or Thunderbolt 3 Connection with. Magnetic charging cables are also available for this. In order to be able to load these two and upcoming models again with trip protection, you can do this, for example Griffin BreakSafe use. In the linked article you will find details about this practical, but not very attractive connector.

The good thing about the Griffin BreakSafe charging cable with a magnetic connector: USB-C is available on both sides. With other cables that have a magnetic USB-C connector, the second, fixed connection usually consists of a USB-A connector. So you would have to have one for these cables USB-A to USB-C adapter acquire. Is it worth it? That is actually questionable; because most magnetic charging cables with USB-C do not seem to work on the Apple MacBook. On Android smartphones and other devices, however, it does. Therefore, to introduce these cables, there is now the following section:

As I said: I can't promise you that the following cable will work on the MacBook (Pro). Rather, it is made for Android smartphones or tablets with USB type C. Various models from manufacturers and brands Huawei, HTC, Lumia, Nexus and OnePlus as well as that Samsung Galaxy S8 from April 2017 seem to work with it. Incidentally, this also has USB-C Sony Xperia XZ Premium, which is due to hit the market in July 2017. 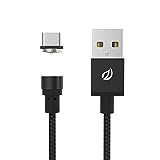 Charging cable with trip protection for the smartphone
This cable with a magnetic USB Type C plug and a fixed USB-A plug can be used for smartphones to charge the battery. Data exchange is not possible due to missing contacts. Models with Lightning for the iPhone and iPad can also be selected on the product page.
Buy it at Amazon Price includes VAT, plus shipping costs (updated: 3.05.2022 at 11: 10 clock)

Whether cell phone or smartphone: many models outside the Apple universe have a micro-USB port for charging and data exchange. Micro-USB can also be found on cameras such as the GoPro and some other devices. Such a Magnetic charging cable with micro USB is therefore useful for more devices than just Android smartphones or the old cell phone. Here is a cable that is often rated very well on Amazon:

In the Xperia series from Sony, some older models have their own connections. Research has shown that magnetic charging cables are being sought especially for the Sony Xperia Z3 Compact; but also for Z1, Z2, for other smartphones and tablets in this series. For charging these Android devices there is, for example, the cable from WSKEN: 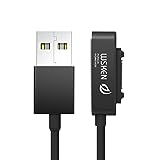 Back to Apple: Lightning for iPhone and iPad

At the end, let's close the clamp with magnetic Lightning charging cables for iPhone and iPad. Here, too, the plug remains in the smartphone or tablet if it is accidentally pulled out jerkily; the cable is disconnected from it. This is safe for the Lightning connector in the Apple device. The best rated cable with a magnetic connector for iPhone and iPad (or iPod) that you can buy on Amazon is this one from DeMori:

What do you think?

How do you charge your mobile devices from laptop to smartphone to tablet, action cam and more? With the standard chargers and cables that are included, or with a magnet charging cable so that nothing happens if you get stuck or trip over the cable? Please leave your opinion on the topic or your preferred cable (or the manufacturer) as a comment :)