MagWrap cable ties and MagDrop cable holders in the test

I received two sets of cable holders from bluelounge, which magnetically hold the cables in place or tie the cables together. The sets were provided to me for free, but this did not affect my item.

I would like to briefly introduce you to both products and convey my impressions of them. Since I have numerous charging and power cables, there is definitely always a need for cable management solutions - let's see if the bluelounge solutions can help here. 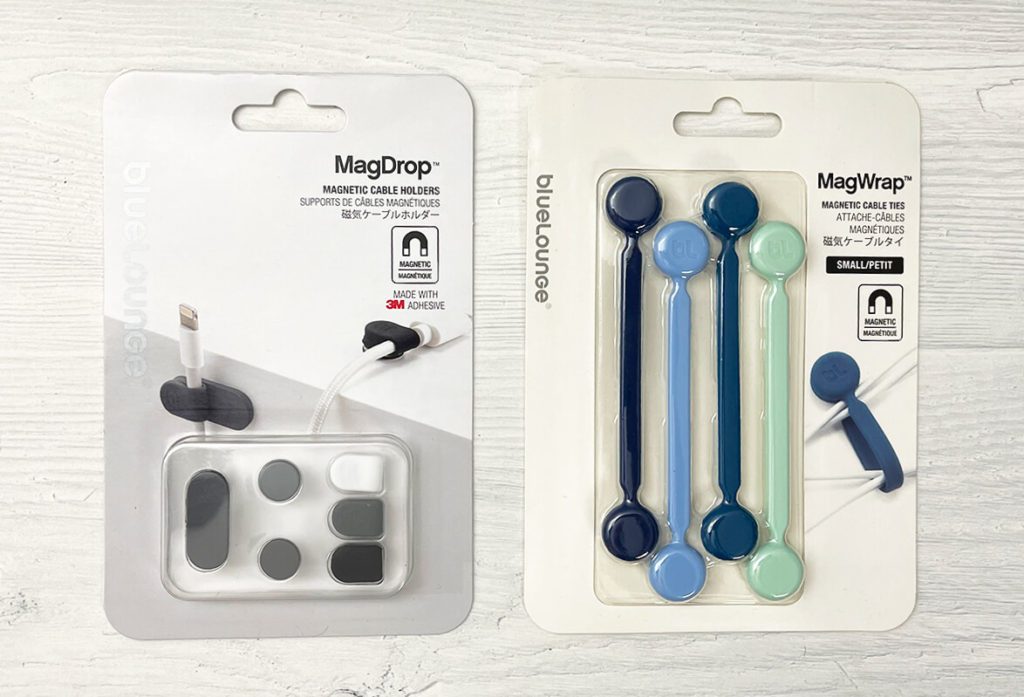 The MagWrap cable ties are available in "small" and "large". I only had the short version with about 10 centimeters in the test, but I think the long ones with 19 centimeters are comparable.

They are made of soft, flexible silicone and have flat, round neodymium magnets at their ends that are completely enclosed in the silicone. As application examples, the bluelounge website shows, for example, the tying of cables, but also the attachment of a bunch of keys to a metal surface.

Here you can see the 10 cm variant of the MagWrap cable ties. The "large" version is almost twice as long.

There are a total of four colors in the set, all of which represent shades of green and blue. Certainly not a bad choice when I look at my iPhone 12 Pro Max in ocean blue.

So that you have an idea of ​​the length of the short MagWrap cable ties, I wrapped them around my index and middle fingers. That just fits. 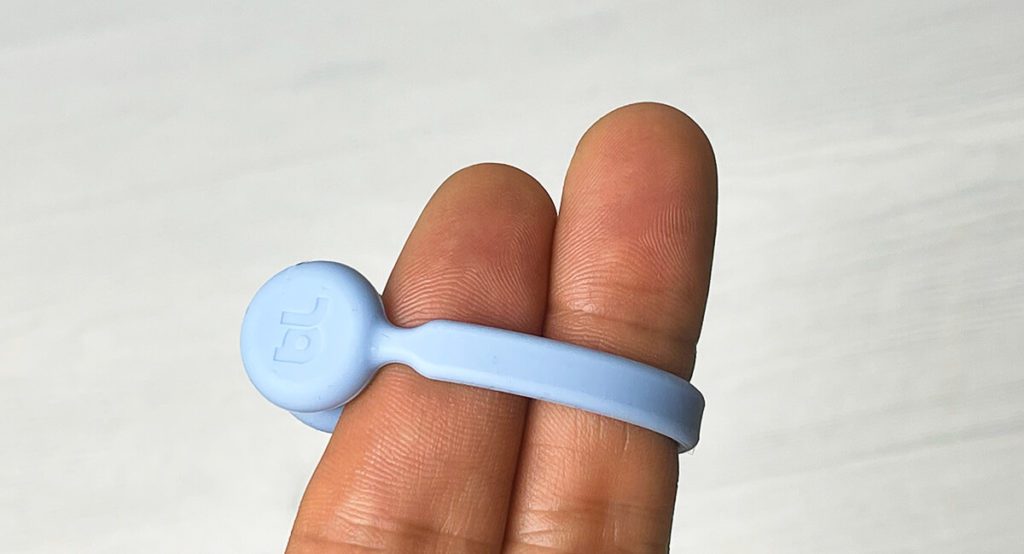 In principle, the idea of ​​using the magnetic ends to hold the cable tie together is a good thing, but it also has a small disadvantage because you cannot change the length of the cable tie.

The only way you can adjust the length is by wrapping the zip tie around a cable twice. Here are Velcro cable ties a little more practical, but not half as nice. : D

Even a little inflexible power cord can be held together with the MagWrap.

The power of the built-in magnets is quite decent. I couldn't find a cable that they couldn't reliably hold together. Even a Euro cable, which is already quite stiff, could be pulled together with it without any problems.

The MagWrap binders cannot match the holding power of Velcro cable ties, but that is not absolutely necessary if you only use them to organize your charging cable in your backpack or bag, for example.

What is practical, however, is that the magnets can also be used to attach the tied cable to a metal tripod or other metal part. 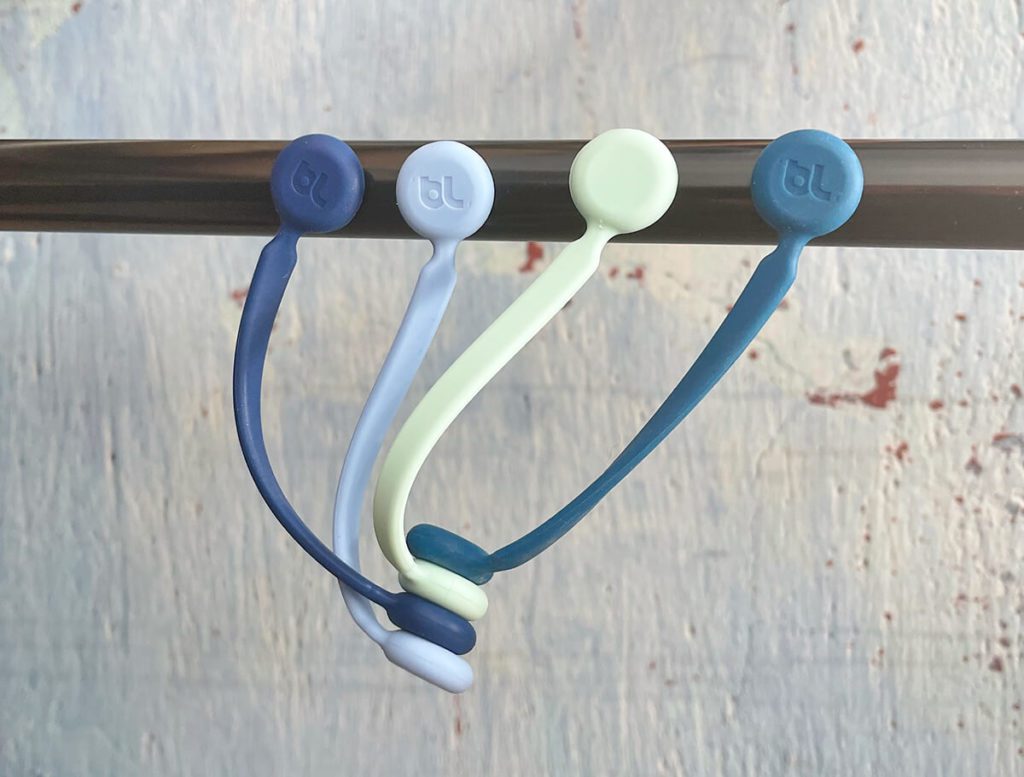 The MagWraps also hold on to tripods and other metal surfaces thanks to the magnets.

My conclusion on the MagWraps

The bottom line is that the MagWrap are the design version of reusable cable ties. They hold up well, but my workplace has nothing to do with design. I think mine Logitech Craft keyboardwho have favourited Magic Mouse and mine MacBook Pro (M1, 13 inch) are the only design elements with me.

For this reason, such a MagWrap is thrown "pearls before swine" with me. You just don't get noticed. Those who surround themselves with fancier things should fall into the target group for the magnetic cable ties from bluelounge. Whoever wants to buy it can do it in the bluelounge shop . 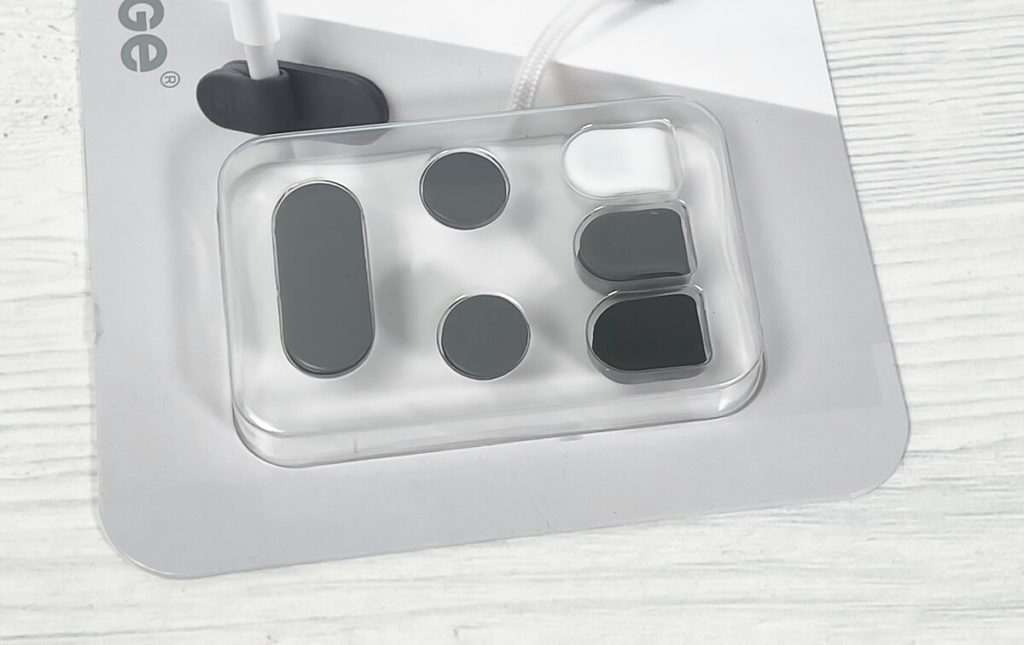 Here you can see the MagDrop set in the pack. There are three adhesive surfaces and three magnetic silicone holders in white, gray and black.

The MagDrop set consists of three cable holders that also work with magnets. They are also made of silicone and are suitable, for example, to fix iPhone charging cables on a table.

This works by attaching an adhesive point, in which a metal part is stuck, to the table surface. The points supplied are already provided with an adhesive surface and are absolutely secure.

Then you wrap a small silicone tape with magnets around the corresponding cable and attach it with the flat ends to the point on the table. This then holds the charging cable in place by the magnetic force. 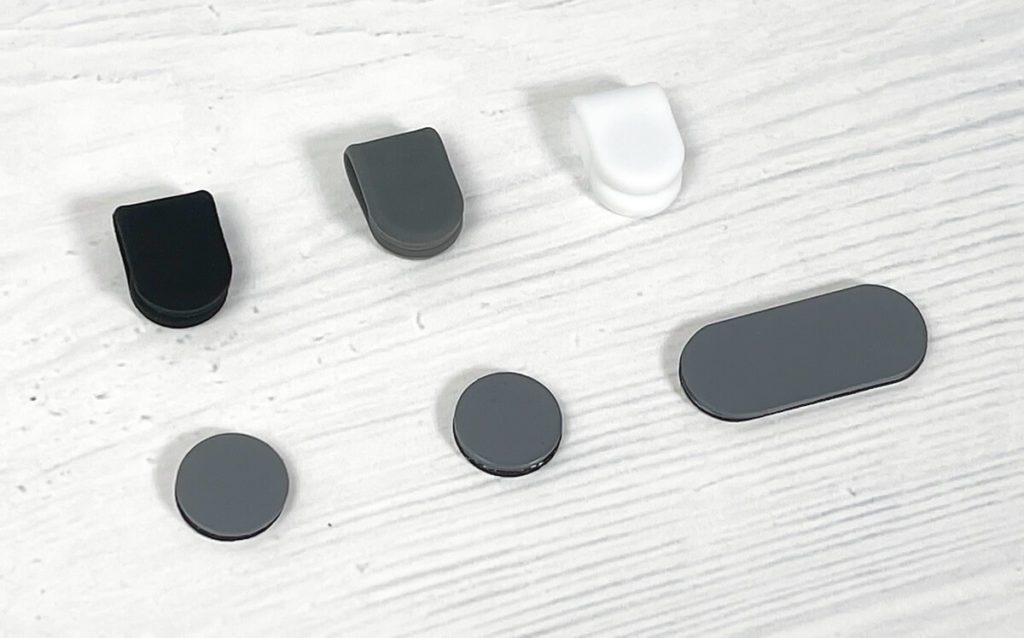 The MagDrop set comes with three adhesive surfaces (below in the picture) to which the three silicone holders (above in the photo) can be attached magnetically (photos: Sir Apfelot).

When developing the MagDrop, the people at bluelounge certainly had no three-wire power cords in the back of their heads, because their own weight alone should overwhelm the strength of the magnets.

However, I also have thicker USB-C cables that are almost as thick as a power cord with their shielding and nylon braiding. These cannot be attached with the MagDrop, as the "silicone clip" does not extend around the USB-C cable. You can squeeze the ends together, but there's not enough magnetic force to hold them together. 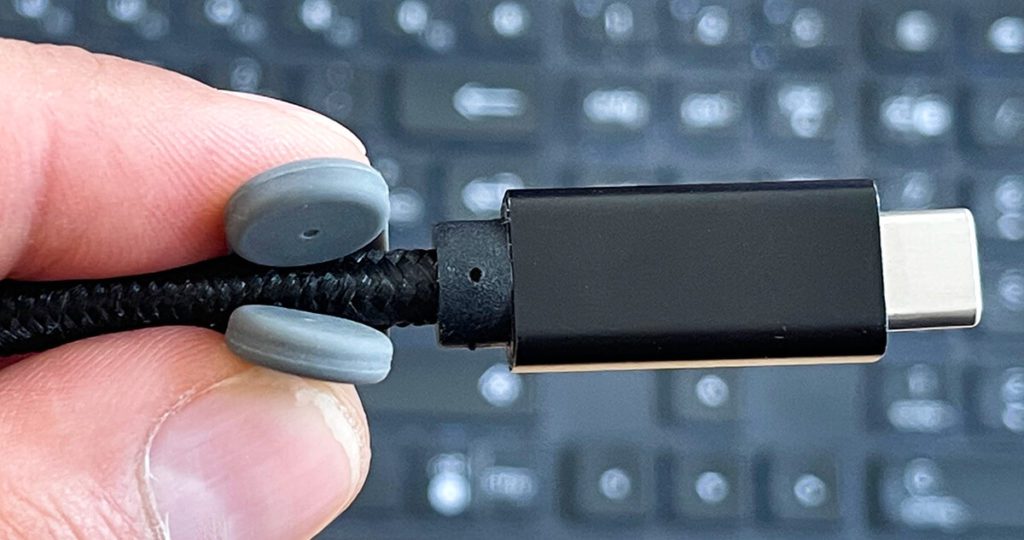 Here you can see that the two ends of the MagDrop cannot be connected because the USB-C cable is too thick.

If you look at the MagDrop holder on Amazon you can see some bad reviews, which describe the holding force of the magnets as too weak. It is correct that the magnets are not very strong, but in my tests the cables did not slip on their own - not even when they put their own weight on the bracket.

From my point of view, they can already fulfill their function, but personally I would also prefer stronger magnets, as my hand always gets stuck on the cable or it falls down when the dog walks past it and pulls it off with its tail.

What you should also know: The cable is not necessarily pinched by the silicone. This means that in practice it usually slips through to the connector and then gets stuck there. 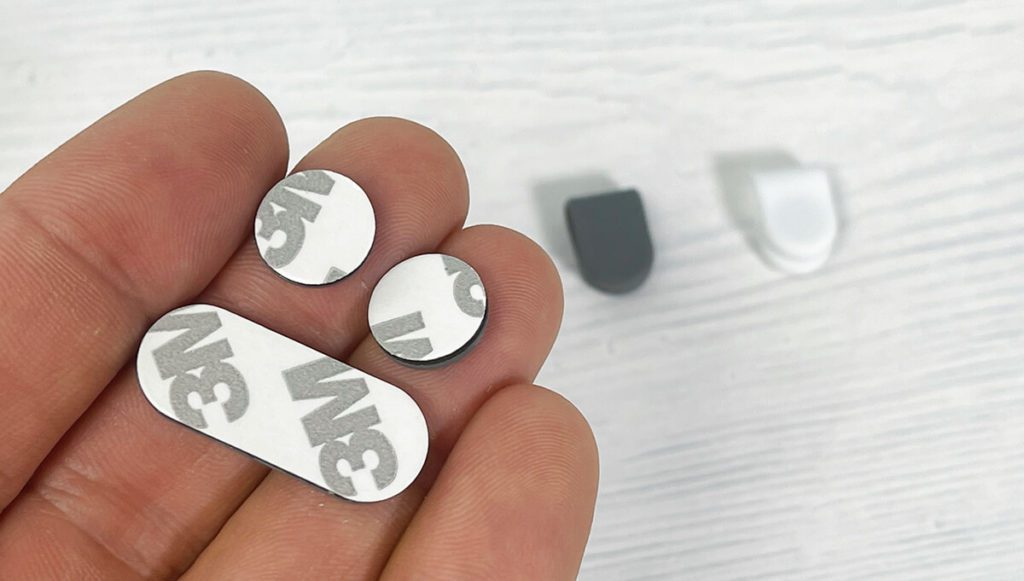 The supplied adhesive surfaces have built-in a piece of metal to which the actual cable holders hold onto with magnets.

My conclusion on the MagDrop cable holders

The magnetic attachment of the MagDrop is not as strong as that of the larger magnets that were built into the MagWrap. This means that charging cables stay reliably on the table, but when you pull them, they come off. However, this is not a disadvantage, because you want them to be able to be pulled off quickly with one hand.

I attached them to my table to hold my Lighting charging cable and MagSafe charging puck, their cables from mine Hunda power supply up under the table.

If you want to buy a MagDrop set, you can here in the bluelounge shop or here at Amazon . 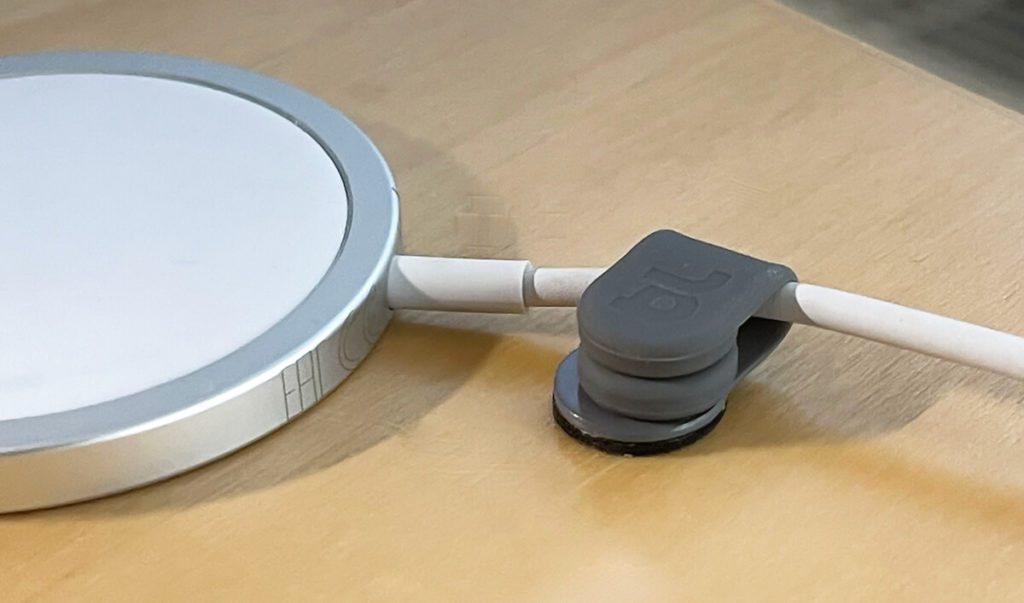 The MagDrop cable holders can also be used to hold the MagSafe charging puck from Apple in place.

If you are looking for a few alternatives to the MagDrop magnetic holders, you will find a few products from other manufacturers that I think are quite useful. However, I do not have these three solutions myself and could therefore only use the Amazon ratings as a guide.