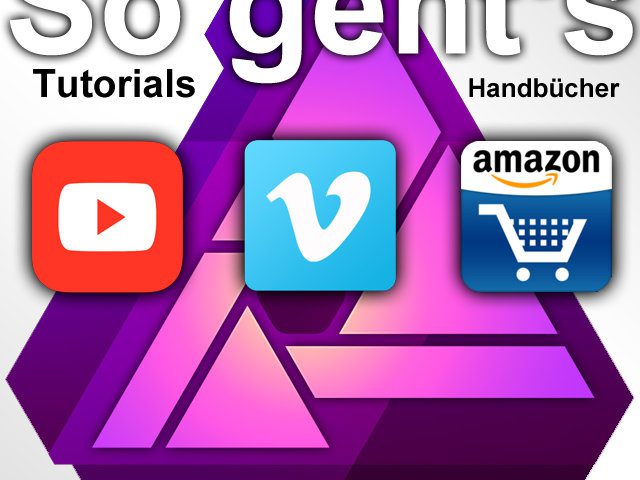 The image editing program Affinity Photo, for which there are now some manuals, instructions and tutorials, is often compared to Photoshop and can be seen as a much cheaper version of the Adobe classic. Because the developer Serif from Great Britain is very much based on Photoshop and created Affinity Photo, a photo editing program that is similar in operation, without a subscription, but with a lot of good reviews.

Affinity Photo is now available for macOS on Mac, iMac and MacBook, for iOS on iPad and for Windows on PC - here I have compiled some current instructions and manuals for you.

The 3 guides featured in this article for using Affinity Photo on Mac and PC.

Affinity Photo is not an image editing program that comes along for free, but it is much cheaper than Photoshop. With a bit of getting used to, even avid Photoshop users can switch to Affinity Photo. Many tools and names, functions, features and settings are the same. Only plugins cannot be adopted.

For comparison, here are the current prices Apps (June 2017):

Anyone who (has) tried around with free or inexpensive programs will sooner or later end up with Gimp or Gimp 2 - but there you can quickly reach your limits. If you want to proceed professionally and bring your imagination together with the current technical possibilities, then a good manual can help you to learn the necessary skills and to explain the individual menus, buttons and tools of Affinity Photo.

In an article from March 2016 the topic Affinity Photo manual already mentioned here. At that time there was only the version for the Apple operating system. Only later, in November 2016, was the opportunity to use the image processing program on the Windows PC - there was one here for that Testing the first public beta with comparison to Photoshop. As part of the Apple WWDC 2017 Keynote At the beginning of June it was also Affinity Photo for the iPad presented.

These manuals are currently available for the different versions:

Current version 1.5 for Windows and Mac
The manual Affinity Photo: Currently version 1.5 for Windows and Mac by Markus Wägner came onto the market in February 2017 and is 329 pages long. The basics are explained step by step and tools and processing options are shown. The current bestseller on the topic!
29,46 EUR
Buy it at Amazon Price includes VAT, plus shipping costs (updated: 16.09.2022 at 08: 36 clock)

Introduction and practice for Windows version
A 352-page paperback book specially written for the Windows version of the photo editing program - by Michael Gradias. Rated very well and rated as the best manual in comparison by a reviewer. Especially for those switching from Photoshop and Lightroom.
6,46 EUR
Buy it at Amazon Price includes VAT, plus shipping costs (updated: 16.09.2022 at 08: 36 clock)

Version 1.5 for Mac and Windows users; Brilliant photos ingeniously simple
For beginners and those who are switching from Adobe to Serif, this book by Johann Szierbeck is made with 264 pages. The Kindle version of this manual is particularly cheap. The ratings are also consistently good to very good.
15,60 EUR
Buy it at Amazon Price includes VAT, plus shipping costs (updated: 16.09.2022 at 08: 36 clock)

Affinity Photo instructions online: step by step on the Internet

Of course you can also find instructions outside of the printed word to work with the Serif program. Especially if it is “only” special handles and tools that you are looking for, and not a complete introduction with theoretical treatises on digital photography, file structure, formats such as JPEG, RAW, etc. The site is a good place to go affinitytutorials.com; there is exactly what the name suggests: tutorials. There is also a forum with help and support so that your questions can be answered quickly. In addition to the photo editing software, the Affinity Designer (another app) themed.

Instructions and tutorials on Vimeo

Sure, Vimeo is not as popular as YouTube, but you can find videos there with less distraction, without advertising and with a content-focused design. This is also possible on the Affinity Photo Vimeo account. 210 videos invite you to discover and learn. A similar offer is also available for Affinity Designer. The designer and graphic artist software will in 94 videos on its own channel helpful and explained in terms of various features and tools.

YouTube is of course one of the first places to go if you want tutorials for programs in German. During a first, quick search, I found three channels with a few tutorials for image editing with Affinity Photo for Mac and Windows: Hofnaar, Affinity Jack and virtual photo art. If you want to scroll through the search results of the entire offer in general, then here is my list of results. If you are looking for special functions or tools, just add them in the YouTube search field;)

As I scrolled around on YouTube, in the middle of researching this article, I also found the first videos for the iPad version. In the videos of the channel affinity tutorials the problem that there is no cursor on the Apple tablet was also considered - the use of the display is shown via video splitting in addition to the screen tap. Here is an example of a German tutorial video for iPad users:

Where do you get your information?

Manual, video tutorial, forum - or maybe a healthy mix of everything? Where can you get information, tips and tricks for using the photo editing app? Or are you still thinking about downloading Affinity Photo? Feel free to leave a comment on the topic :)