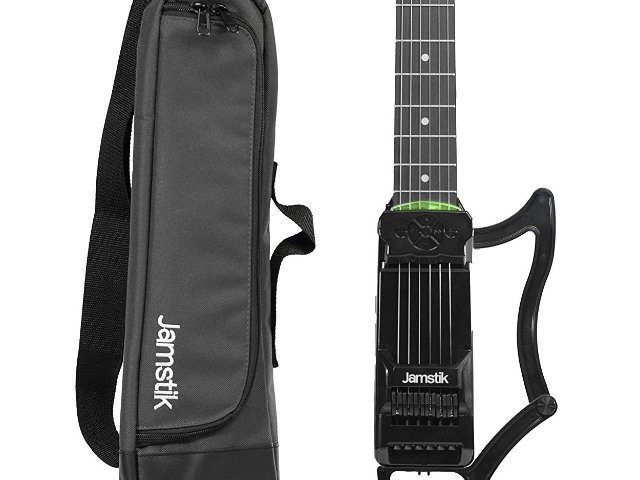 The Jamstik 7 is a midi guitar that saves space and enables you to learn to play the guitar digitally in connection with the iPad, Mac and PC. In addition, the device's midi capability makes it possible to play in other instruments such as electric guitar, ukulele, drums, synthesizers and more via Bluetooth and USB connection. So if you are looking for a mobile guitar trainer that works with iOS, macOS and Windows and offers seven frets, you can access it here. Further advantages of the Jamstik 7 Smart Guitar and a comparison to the previous model Jamstik + can be found in this post.

GarageBand demos can be used. Jamstik7 Jamstik+" width="1024″ height="484″ /> The Zivix Jamstik 7 midi guitar can be used as a smart guitar for learning to play, as an instrument for digital jam sessions and as a recording device for GarageBand demos.

Jamstik 7 - This is the midi guitar

The Jamstik 7 lives up to its name. The artificial name is made up of “Jam”, which is short for “Jamsession”, and “Stick”, which means stick. Due to the digital function of the device, there is no sound body; For better posture and operation, however, appropriate frames are offered. A transport bag is included in the scope of delivery when choosing the corresponding offer.

In order to learn grips and playing styles, the finger positions are checked using the so-called FredTouch technology. 36 optical sensors and 42 capacitive sensors are used for this. Two processors process the data and ensure that the tones generated by handles and and the actual playing on the pages are also reproduced digitally.

Comparison of the digital guitars Jamstik 7 and Jamstik +

The previous model Jamstik + came onto the market in 2015 and checked the finger positions using electromagnetic sensors. This pickup has been renewed and improved with the Jamstik2018 released in 7. In addition, there is a much better battery life of around 72 hours; that of the Plus predecessor was only 8 to 10 hours. In addition, it only has five instead of seven frets. You can find the complete comparison in this table:

If you want to buy the midi guitar Jamstik 7 on Amazon, you can choose between two or three providers; but there is only one prime offer. The price ranges from € 249,00 (only the device) to € 298,90 (including carrying bag and frame for storage on the leg). There is also a leg rest as a housing replacement to buy individually for € 28,90, but without Prime shipping (all information: as of July 31, 2019).

The shown midi guitar works not only with some of the apps offered by the manufacturer and developer Zivix ("Jamstik" for connection, firmware and settings as well as "JamTutor" as a learning app for practicing), but also and above all with the free one from Apple provided program GarageBand. Here I list the iOS apps with the corresponding download boxes.

The following video (Attention, from 2014!) Shows how quickly and easily users can create a demo song or jam session in GarageBand on the iPad with a little practice and skill. On the Youtube channel For the Jamstik devices from Zivix you will find many more instructions, demos and advice on how to use them. Of course, there are also more recent videos from 2018 and 2019.

Apps for macOS, Windows and Android

For macOS and Windows there are no Zivix apps that can be installed directly on the hard drive; The Jamstik guitars can be recognized and used as plug & play devices via USB in some DAW programs. Under Windows possibly with the free MAGIX Music Maker.

In addition to missing apps, there is an online solution as a web app in the Google Chrome browser. On the portal play.jamstik.com the functions and content of the two iOS apps mentioned above as well as other features can be used. This only works with the Chrome browser, as it is the only one that supports Web MIDI.

It is expected that the web portal will not only run on mobile devices by the end of 2019, but will also have an arcade mode similar to the "Guitar Hero" game. Support on mobile devices is important because there are currently no Android apps for the Zivix Jamstik 7 midi guitar. The currently available apps Jamstik + and Jamstik + Simulator are only compatible with the previous and discontinued models.

Conclusion on Jamstik 7 and customer reviews

Since I can't give you a Jamstik 7 test myself, I could only put together a correct conclusion from the existing customer reviews and ratings on Amazon. However, the few German user reviews in particular paint a mixed picture. But if you look at the at this point integrated US reviews, then you will also find voices that rate the Jamstik 7 midi guitar as good to very good. You seem to have to know how to deal with it and have a certain willingness to learn at the beginning - as well as digging into the apps. But then it seems to work. Hence the consideration: good for young people and adults, not so good for children without a lot of patience or willingness to learn.