The best mini drones with cameras: Quadrocopter with video recording 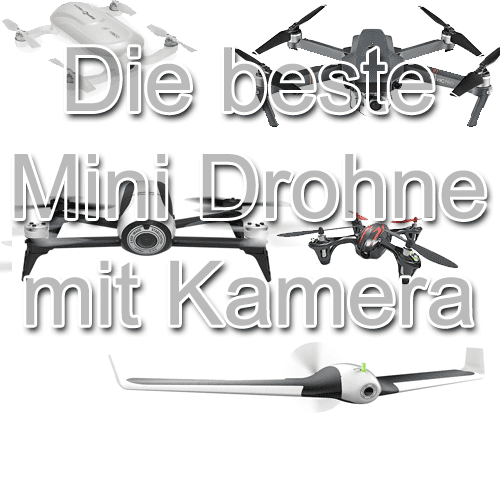 Mini drones with camera: When looking for the right quadrocopter, i.e. a drone that also has a camera for photo and video recordings, there are different criteria. In addition to the size, which can be interpreted variably with the term “mini”, the video quality and the price of the drone also play an important role. Here I have a few for you Quadrocopter with camera which are convincing in terms of price, quality and size. Of course, you don't get all three criteria met 100% at once - that's how the DJI Phantom 4 (Pro) in the higher price segment, but brings the best video quality.

Update 2017: The DJI Spark is on the market. That's why I one more paragraph about the new, small drone from DJI built into this article.

Mini drone with 4K videos? At DJI it is compact, but not mini ...

As already mentioned, I would also like a little something about the DJI Phantom 4 Get rid of. This model with a diagonal of 35 cm (without propellers) may not be one for some Mini drone more. However, it is much more handy and easier to stow or transport than, for example, the DJI Inspire 1 or DJI Inspire 2. I would no longer call the latter a mini either. Also comes with good (but not Phantom or Inspire-Gut) video quality DJI Mavic Pro hence, which among the high-quality drones can be described as a handy device (dimensions, folded: 8,3 x 8,3 x 19,8 cm). Also here I would still have the GoPro Karma call, if she hadn't been called back.

If you are interested in DJI drones, here are the corresponding product pages with all the information from the manufacturer: 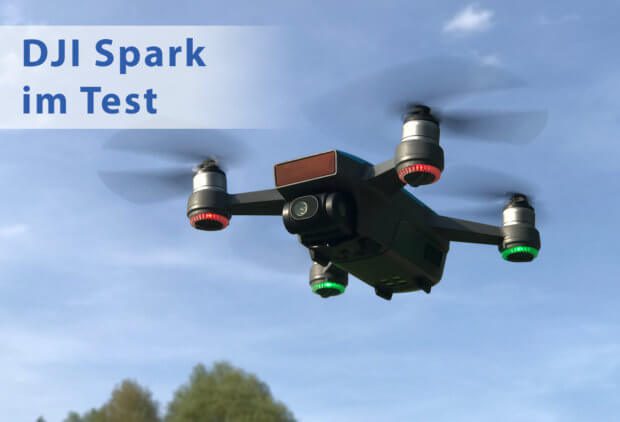 DJI Spark in the test - advantages, disadvantages and the comparison with the Mavic Pro

The DJI Spark is a small drone from DJI that was launched in May 2017. So if you want a high quality mini drone with a very good camera, simple operation, gesture control and so on, then I recommend you this purchase. In the further course of this entry you will be shown cheaper alternatives. But the lower price already shows that compromises are being made somewhere. For details on the individual mini drones with cameras, read their paragraph by paragraph. I have prepared a whole article for you about the DJI Spark: DJI Spark: Tech Specs, Videos, Price, and More. And if you want to know how the small drone with full HD camera performs in everyday life, then I recommend you my test report on the DJI Spark. (End of update)

Mini quadrocopters, which are supposed to be really tiny, do not have an outstanding camera because of their small dimensions and the low price that is therefore expected by (mostly private) users. An example would be the ONCHOICE H8C quadrocopter. The mini drone with 2 megapixel camera has very good reviews on Amazon, but the image quality can only be used for hobby purposes or as a toy for children to practice flying and / or taking photos. The size: 18 x 18 cm. Everything below that brings even less resolution cameras; sometimes only 1 megapixel or even only 0,3 megapixel.

Also called "the flying selfie stick", this drone has a size of 13,5 x 14,5 x 3,7 cm when unfolded. The Zerotech DOBBY can therefore compete with the DJI Mavic Pro, but costs 700 euros less. Nevertheless: an HD camera for 4K recordings is built in. So what is the problem with this model? Well, the flight time, the range, the quality of the image transmission and many other specs have been slimmed down a lot. If you don't want to fly too long and in relative proximity or take pictures, you will get your money's worth with this mini quadrocopter including selfie mode. 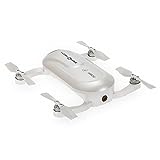 ZEROTECH DOBBY Wifi FPV Live Transmission Selfie intelligent drone with 4K 13MP HD camera
GPS and Glonass help to fly the drone safely and hold it in position. The 200 g lightweight mini quadrocopter with selfie mode has a flight time of 9 minutes and transmits videos with a maximum of 640 x 480 pixels.
Buy it at Amazon Price includes VAT, plus shipping costs (updated: 19.01.2022 at 19: 10 clock)

What are FPV Mini Drones? And what is a racing drone?

FPV stands for "First Person View", a term that should be known from the field of video games. With drones, FPV stands for the possibility of transferring the drone's view directly to VR glasses. So you don't fly in the TPV, the “third person view” of the observer, but with a direct view from the perspective of the drone. There are some very good and fast mini quadrocopters in this area, so-called racing drones.

A very special drone from the FPV area is the Parrot Disco. It is an airplane-like missile and not a quadrocopter. The mini airplane comes with the controller and VR or FPV glasses in the set. I find the 1080p full HD camera and the 45 minute battery life convincing. At a maximum speed of 80 km / h one can also speak of a racing drone. But the Parrot Bebop 2 drone with approx. 60 km / h can also be flown quickly and in the FPV perspective.

Parrot Disco FPV drone in a set with Skycontroller and FPV glasses
Not that small aircraft drone with a wingspan of 1,15 m - but with a speed of up to 80 km / h on the clock. The camera records in full HD, the battery can last up to 45 minutes of flight. Even 32 GB of memory are integrated. Maybe not a mini drone, but good.
Buy it at Amazon Price includes VAT, plus shipping costs (updated: 19.01.2022 at 19: 10 clock) 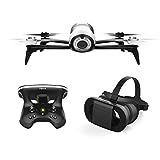 Hubsan drones: not a camera drone that really impresses

Admittedly, if you look through the Amazon reviews, the tiny Hubsan seem to be good for learning to fly. However, the cheap and really small mini-drones from Hubsan either have no camera or only a low-quality camera. Those with HD cameras are larger, more expensive, but still have very simple control units. As with the previous models, which are not from DJI or other professional brands, the following applies: something is always slimmed down - either size, price or quality; sometimes two or even all three of these criteria. There are Hubsan drones on Amazon here in the overview.

In short: what are the best mini-drones?

The best mini quadrocopters, which can come off as winners in every test in terms of size, image quality and operation, come from professional companies such as DJI, GoPro or perhaps Parrot. However, these drones are not available for free. If you are looking for cheap quadrocopters, you have to know whether you want to enjoy flying or having fun with the pictures you have taken. Depending on the model, individual technical details of the drones are weakened - the camera, the battery life, the scope of operation, etc. Therefore, you should first determine what you want to do with the drone and then compare the individual offers.