Print photos on the go: Mobile photo printer for iPhone, iPad and MacBook 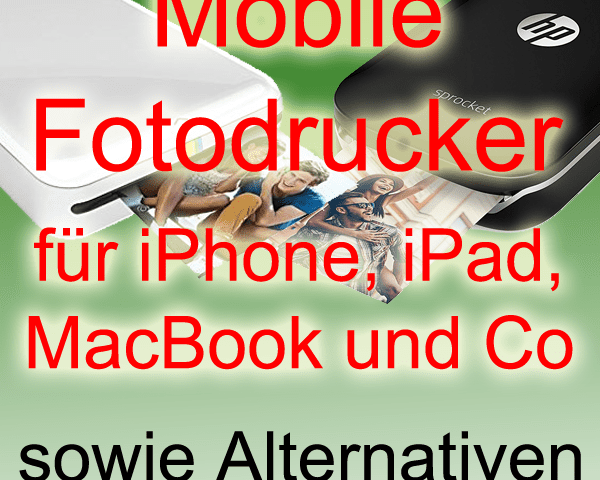 Print photos yourself, that's no longer a problem in drugstores, electronics stores and at home. But spontaneously printing a photo on the go, on vacation or in any other situation is not that common yet. In addition, cloud storage, social networks, WhatsApp, etc. are no longer required to print photos, etc. Mobile photo printers are therefore in demand, but have not yet reached the masses. Which mobile photo printer for printing pictures from iPhone, iPad and MacBook I have found and what alternatives there are, you can read here.

The mobile photo printer HP Sprocket I looked at it first (on Amazon). With its designs in black-silver and white-rosé, it goes well with the individual iPhone models on the market. The connection from iPhone, iPad or MacBook to the mobile photo printer is established via Bluetooth. The small device also has an internal battery that can be charged via micro USB. About the HP Sprocket App print photos from Apple or Android devices.

The HP Sprocket mobile photo printer looks good, but is not quite as popular. Image source: Amazon

About the image quality of the HP Sprocket: The photos are printed on special zinc paper, which has the advantage that no printer cartridges with ink are used. But even customers who received a test model for free do not seem to be 100% convinced. The rating on Amazon also looks like this: 1 x 5 stars; 2 x 4 stars; 2 x 3 stars; 1 x 2 stars. The image quality is described as medium to rather poor.

If you want to take a look at the device, then this way. The paper to refill you can find here.

The Polaroid POLMP01W You will find 63 ratings, 32 of which have very good 5 stars and 19 good 4 stars. That already indicates that this mobile photo printer produces more satisfactory results. By Polaroid ZIP app you can print photos from Apple and Android devices on the go. In addition, zinc paper is also used, so that no ink cartridges are required.

The mobile printer for photos from iPhone, iPad and Co Polaroid POLMP01W outputs better images than the above model; Image source: Amazon

About the image quality of the Polaroid POLMP01W: The majority of Amazon customers celebrate the pictures that can be printed out with the Polaroid mobile photo printer. A user uploaded pictures of photos that always show the same stripes. It cannot be ruled out that it was a device fault that led to this. The many very good and good reviews also indicate that the pictures (as well as the ease of use, etc.) are well received.

If you want to look at the device, then click here. Refill paper you can find here.

For those who don't want to post-process: The Fujifilm Instax 210 instant camera

Fujifilm Instax 210 instant camera can be compared with a classic Polaroid, only that the design corresponds to a (somewhat older) photo or digital camera. There are 174 5-star votes and 38 4-star ratings. In addition, there are only 22 lower ratings. The camera is ideal for those who do not want to edit their pictures or who do not want to choose the best one from several shots. A real snapshot printer.

For all those who do not want to edit their pictures, but want to print real snapshots immediately on the go: the Fujifilm Instax 210 instant camera; Image source: Amazon

If you are interested in the instant camera, then this is this is the link of choice, And here there is paper to add. (Anyone who wants to conjure up effects with this camera, too, has it with this lens set the opportunity to do so.)