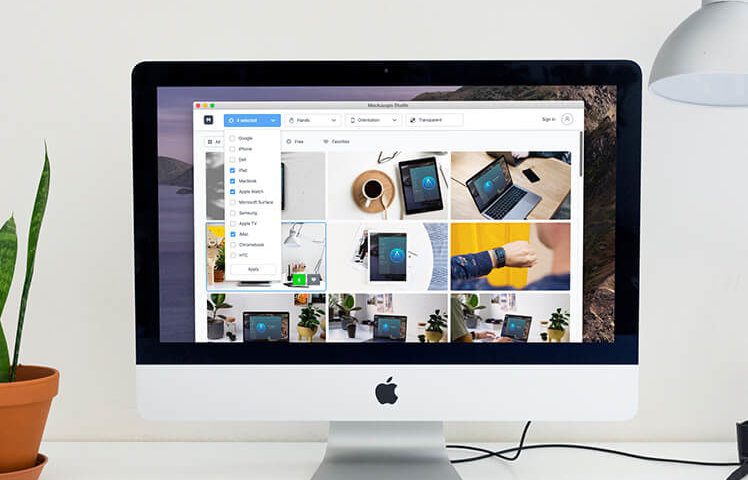 So far, I've always had the software "Mockuuups Studio" (is in Setapp included), which already has some mockup templates for iPhones, iPads and Macs (as well as Samsung, Google, Microsoft and HTC devices). Unfortunately, the selection is quite limited and there are hardly any new mockups to choose from.

For this reason I started looking for more mockup tools and went to service Placeit.net came across, which offers a huge selection of mockup templates in addition to logo templates, video templates and other things. 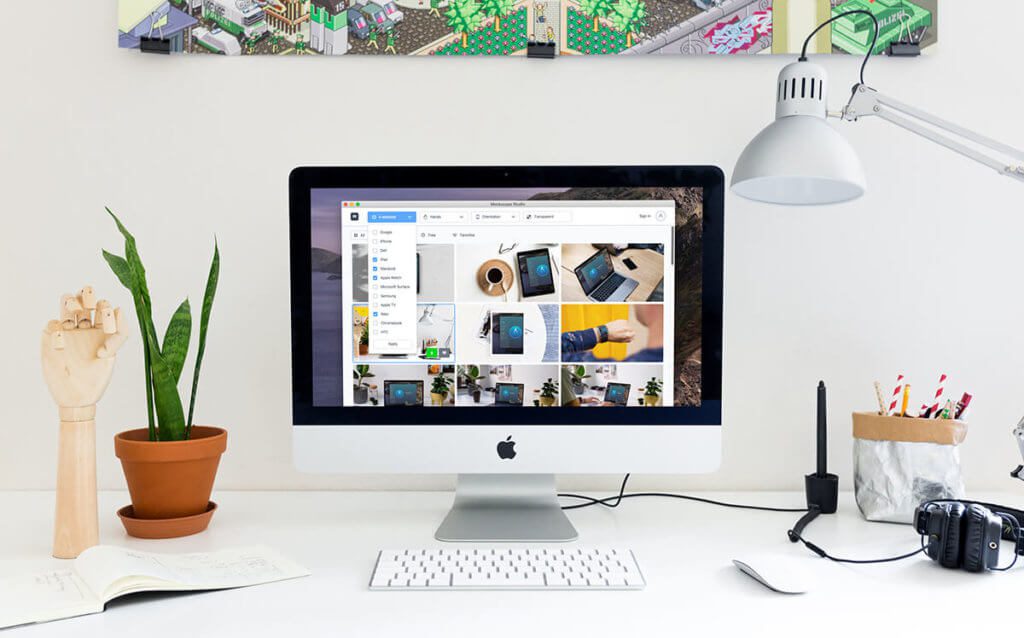 Here I have created an iMac mockup with mockuuups in which a screenshot of mockuuups can be seen. If that's not art ...

Why I only have the two mockup services in comparison ...

I had also looked at a few other services, but with these there was often only little choice in the Apple devices and the mockups are almost all against a plain or transparent background. As a blogger, I'm more on the lookout for photo mockups in which my screenshots are mounted, for example, in iMacs that were photographed in everyday situations.

So even if I do not compare all mockup tools with my comparison, I still hope that it is interesting to compare the - from my point of view - two best tools for Apple mockups. 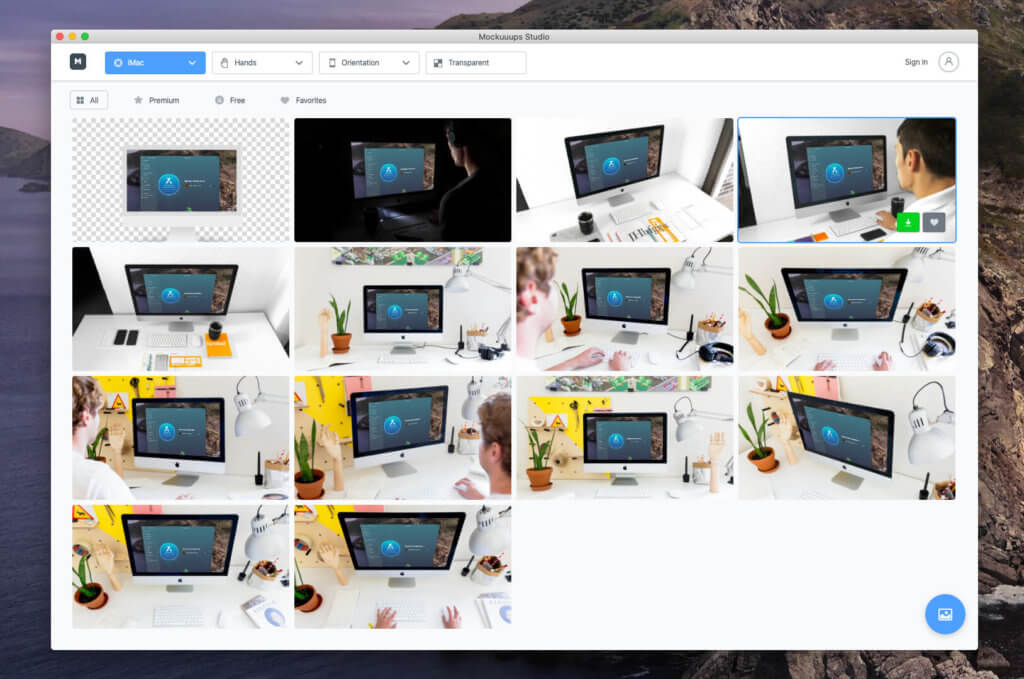 Unfortunately, you can only find 14 iMac mockups at Mockuuups Studio. With almost 170 iPads, Placeit has a lot more to offer.

If I search for iPhone templates in Mockuuups Studio, I get a little less than 300 mockups presented. That sounds like a lot at first, but if you then remove those that, for example, always show the same iPhone model in front of a differently colored background, then a large part is already lost.

In addition, a number of mockups are still made with very old models such as the iPhone SE or iPhone 4, which one can hardly use nowadays. You can quickly see that the selection is pretty much reduced if you take a closer look. 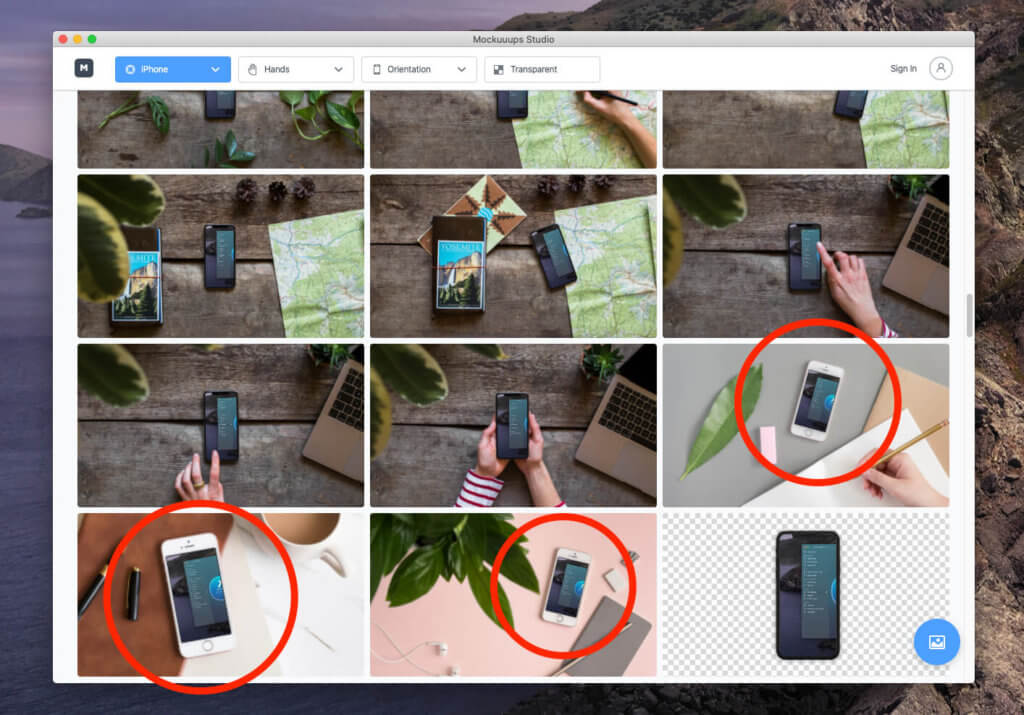 At Mockuuups Studio you unfortunately have to live with the fact that old iPhone models also appear in the list.

Placeit: many Apple mockups to choose from

If you look at the selection of mockups at Placeit, you will quickly see that there is a lot of choice here. The nice thing is that you can even filter for specific iPhone models. If you want to see your screenshot on an iPhone 11 Pro Max, this is no problem with Placeit. Unfortunately, Mockuuups Studio doesn't have a filter to find out certain iPhone models.

Even if you are looking specifically for the latest iPhone models, Placeit still offers almost 100 mockups. If you search without a model filter, there are almost 2000 iPhone mockups. 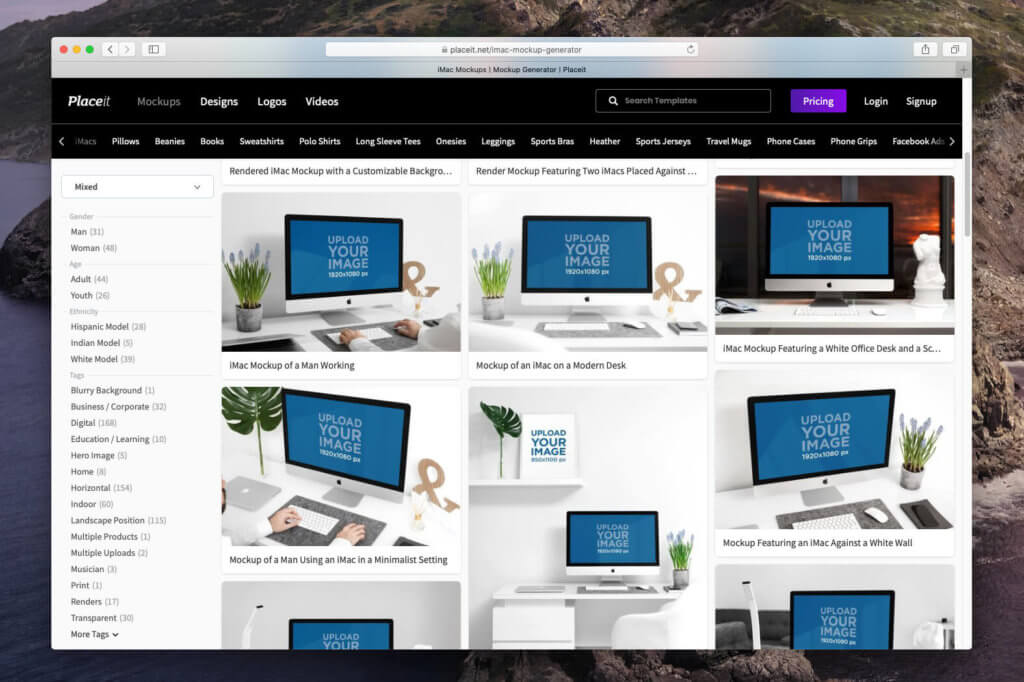 The Placeit.net service has around 170 iMac mockups to choose from. More than ten times the amount compared to Mockuuup's Studio (Photos: Sir Apfelot).

The selection in comparison: Mockuuups Studio vs. Placeit.net

In order to underline the question about the selection with numbers, I roughly estimated how many mockups each provider has for certain Apple device categories:

You can already see that Mockuuups Studio is not a serious competitor to Placeit. Above all, the amount of mockups for new Apple devices is significantly higher at Placeit and therefore more interesting for me as a tech blogger.

Comparison of the resolution of the mockups

The resolution of the mockups is also not entirely irrelevant. To compare this, I exported a mockup in landscape format from both services:

However, the information only shows a trend, because both providers do not always have the same resolution for the graphics. But you can say that Mockuuups Studio always offers a little more resolution than Placeit.

For normal websites, the Apple App Store or printouts in small dimensions, the mockups of both providers are easily sufficient, but if the resolution factor is the main criterion in the selection, mockups are the better choice.

The resolution of the mockups at Placeit.net is even large enough for printing and is easily enough for any website.

Multi-device mockups only at Placeit

In some cases you may need a mockup with MacBook, iPad and iPhone in the picture. Such multi-device mockups are not found at mockuuups. With Placeit, on the other hand, you can specifically search for them using tags and motif filters.

Here is an example of a Placeit search: show all MacBook mockups with the tag "Multiple Products" 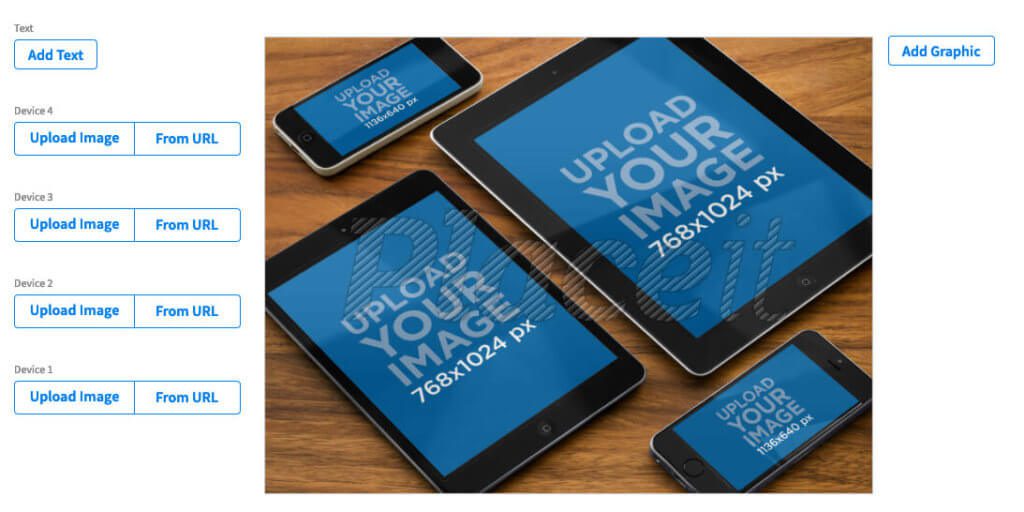 Mockups with multiple devices can only be found on Placeit.net. Here are a few iPads and iPhones on a wooden table.

Search and ease of use of the two solutions in comparison

Searching mockuuups is foolproof - especially because there is little choice. For example, you click on "iPad" and you get all the iPad mockups. Now you can filter according to the following points:

With Placeit, on the other hand, you have a huge selection of photos (almost 2000 for the iPhone) and a search function is therefore important. This works with tags, search words or clickable filters.

For example, if I choose the iMac Mockups, I can still filter the following criteria in the sidebar:

If I am looking for an iMac mockup with transparency, I can tick this term in the tags. At first glance, the search is a bit confusing, but once you get it, you can find your way around here.

Incidentally, both Mockuuups Studio and Placeit.net offer the option of uploading the screenshot in order to see a preview of the finished mockups in the overview. 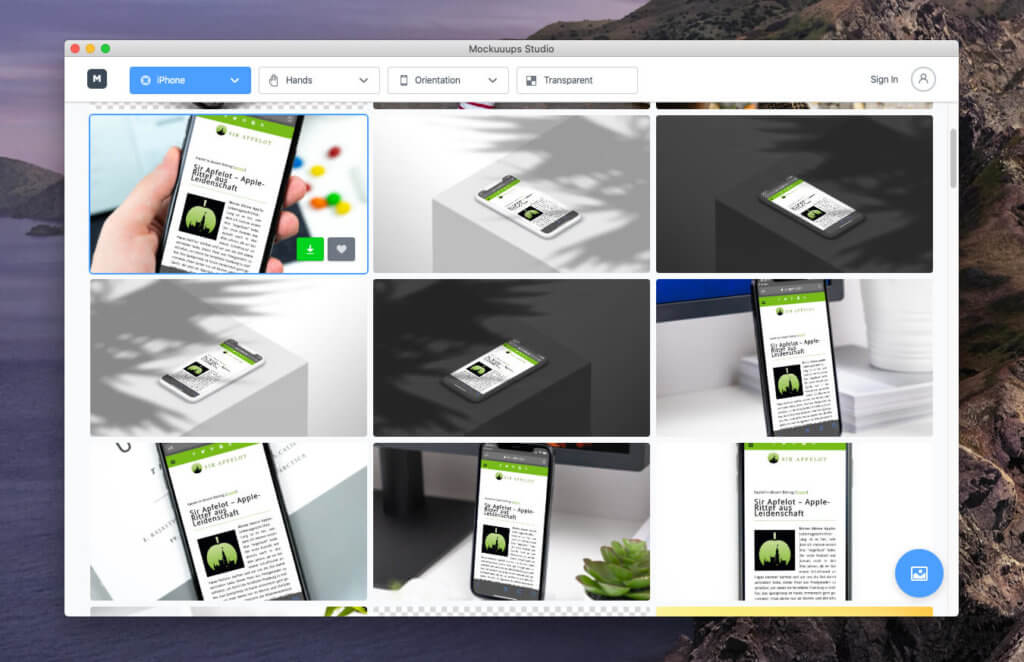 With both services you can already see in the preview what the mockups will look like with the uploaded screenshot.

Cropping the screenshots: no strength of mockups

When fitting the screenshot to the correct size of the tablet, I sometimes had the case with Mockuuups that he added black bars to the top and bottom of the screenshot so that it fits "his" expected size. Unfortunately there is no way to influence the size in any way.

With Placeit, on the other hand, there is a window after the upload in which you can control the crop with a crop controller. This is very helpful if, for example, like me, you are working on an ultra-wide monitor and you cannot take full screen screenshots because there would be far too much in the picture. For this reason, I often only take screenshots of parts of the screen (CMD + SHIFT + 4) and they don't always have the same aspect ratio as the display of the MacBook or iMac. 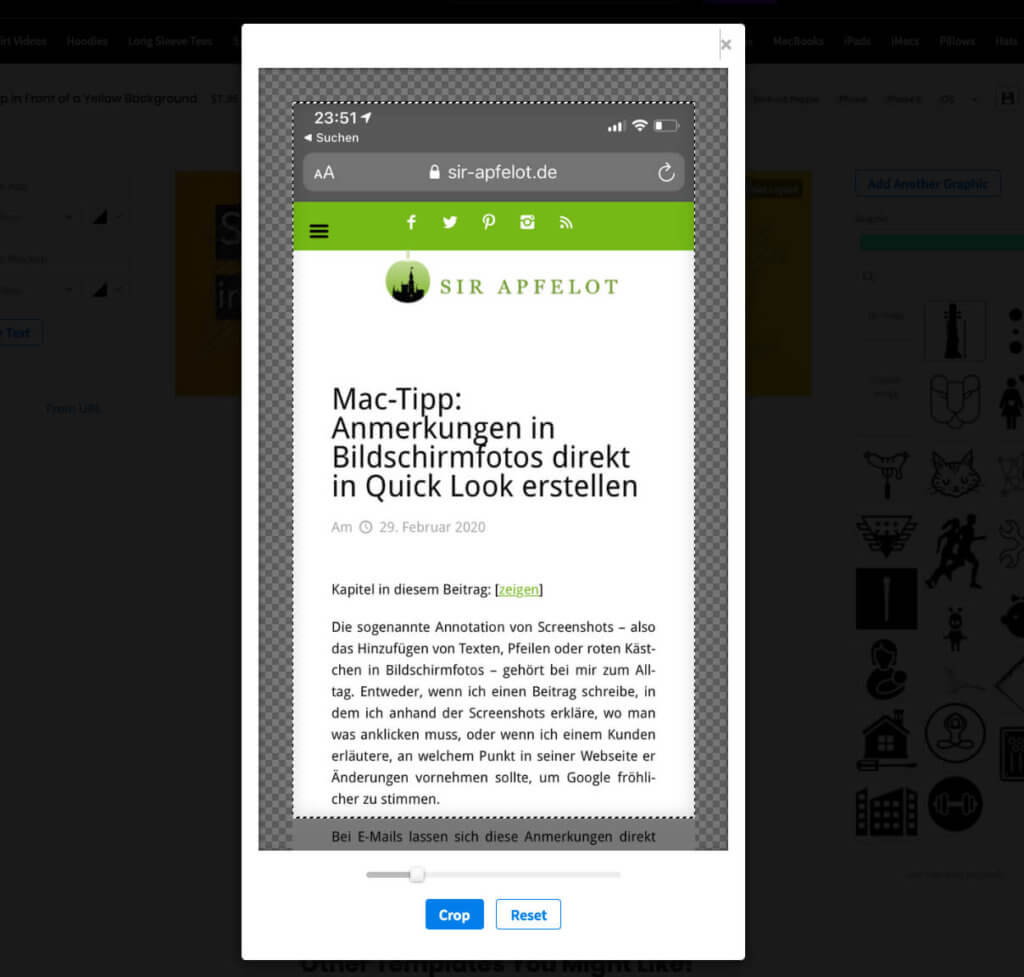 The cropping of the screenshot is solved quite comfortably with Placeit, while with Mockuuups you unfortunately have no influence on it - it is simply made to fit somehow.

A small difference between mockups and placeit is also the download or export of the mockups. While with Mockuuups you can save the file directly to your Mac because the software is a native Mac app, you have to plan a few seconds with Placeit.

The online service Placeit takes a few seconds to assemble the mock-up from the uploaded screenshot. When the file is ready, you will receive a download link via email as well as a message on the website so that you can save the file.

The costs in comparison

Personally, I am always a fan of annual payments with such services, as I usually use them permanently and not just in a month. Both Mockuuups Studio and Placeit offer a monthly or annual subscription. The cost looks like this:

Placeit is a bit more expensive, but it also offers a multiple number of mock-up templates. If you need mockups on a regular basis, you can use Placeit without hesitation.

Another special feature for occasional users is that Placeit also offers the mockups individually for around 3 USD. So if you only rarely use mockups for your work, you might be better off with the "rail". 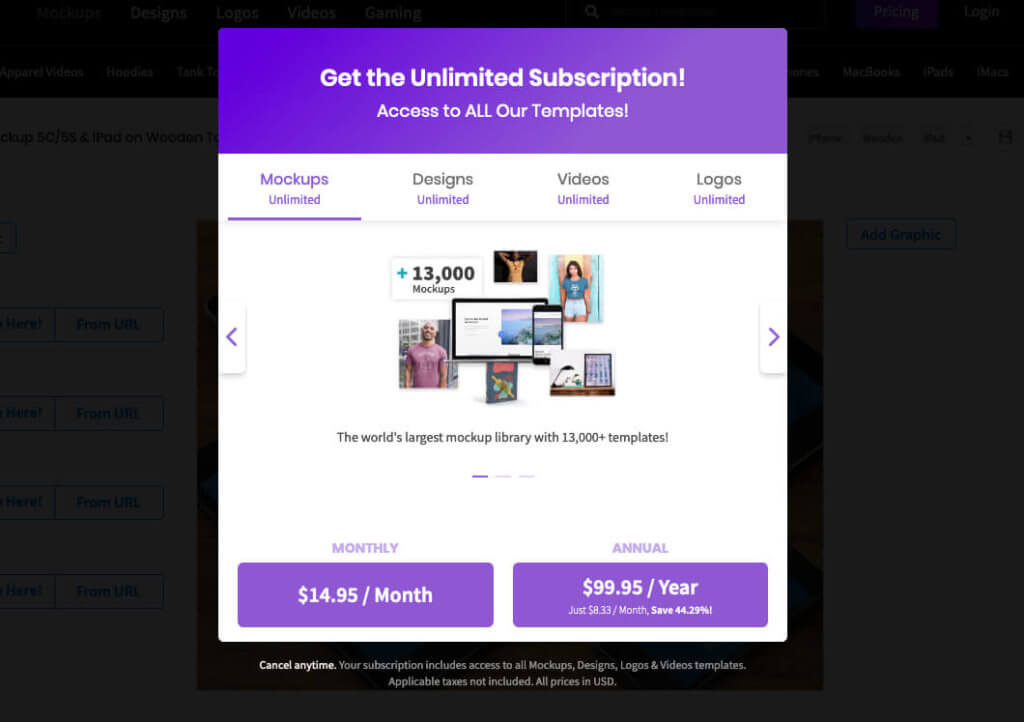 Both services would like to have a monthly or annual subscription before you can access the high-resolution mockups.

I only got to Mockuuups Studio through my Setapp subscription. This is a software subscription for the Mac that costs around 10 euros per month. In return, you get access to over 170 premium apps, including great tools such as CleanMyMac, OneSwitch, PDFPen, iStat menus and the like.

Among other things, you will also find Mockuuups Studio in the apps, so that you should not actually book the subscription via Mockuuups, but rather use the Setapp subscription right away. For a small surcharge per month you can get the mockup software and all the other - really worthwhile - apps from Setapp. 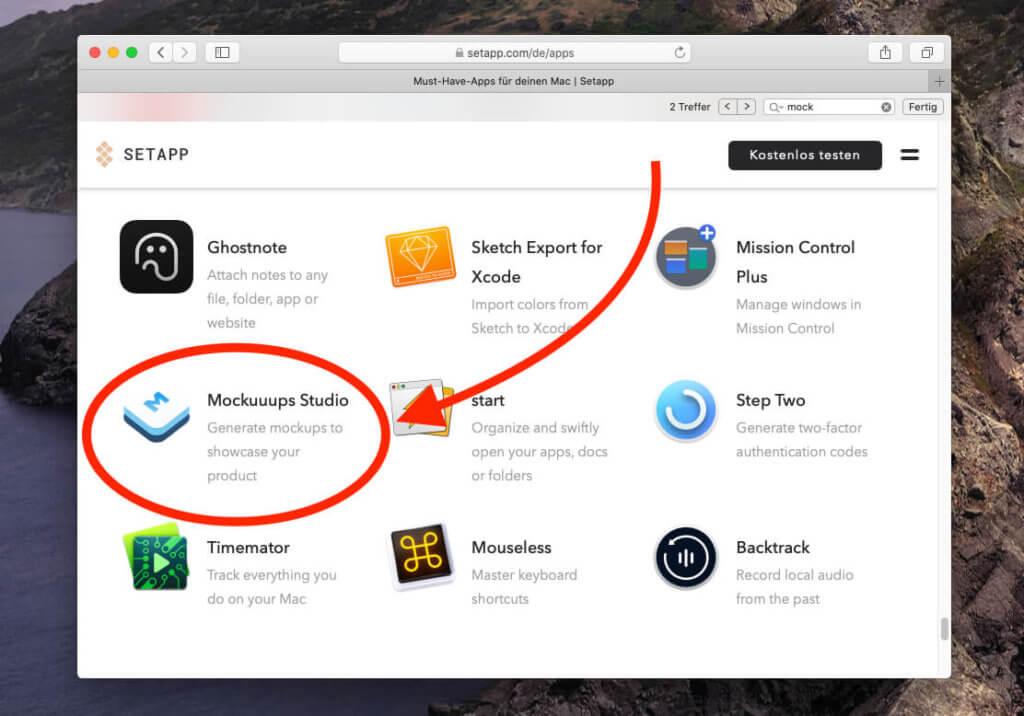 The Mockuuups Studio software can also be found in the SetApp subscription selection, through which you can get many other Mac tools in addition to Mockuuups for only 10 euros a month.

I have this Setapp subscription Booked for years anyway and will continue to use it. For this reason, Mockuuups Studio will still be available on my Mac.

Nevertheless, I decided for myself, the Placeit service to use. I was simply won over by the huge selection of mockups for Apple devices. In addition, the offer is being expanded noticeably here week after week. Especially when Apple throws new devices on the market again, I would like to work with the latest mockups and not with old iPhone SE templates.

If you are interested in the two solutions, here are the appropriate links: