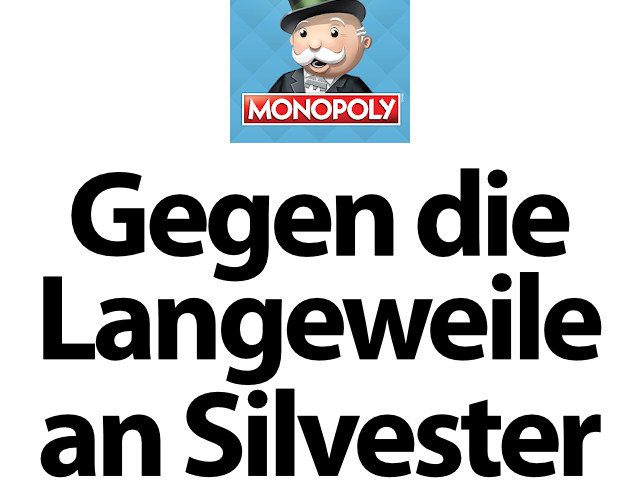 Whether alone, with family or with friends - New Year's Eve can drag on. If there is no real program besides the one on TV, you can use the recently re-launched Monopoly app to get things moving. The developers of Marmalade Games have designed the officially licensed Hasbro 3D version for mobile devices very nicely. The download is possible for iOS or iPadOS as well as for Android. The price of € 4,49 for the iPhone and iPad as well as for Android devices is not too high.

The new Monopoly app for iPhone, iPad and Android devices can be found in the official stores. The small price for the 3D app is justified.

The new version of the Monopoly app has been available since the beginning of December 2019. The developers at Marmalade Games have brought Hasbro's board game into the 3D age and offer the opportunity to play alone and together. Especially on the Apple iPad, the graphics should come into their own and the playing field should unfold beautifully. If necessary, you can also use a large iPhone;) The game play is animated and in addition to the AI ​​as a competitor, you can use the pass-and-play mode to allow real players to participate. You get an insight with this one Video:

As mentioned above, the game costs € 4,49 for the mobile operating systems. But if you save on the fireworks and don't buy as many film streams from Amazon, you can quickly get the money back on the same evening. You can of course download the Monopoly app from the official sources; the Apple App Store and the Google Play Store. If you play it today, please leave a comment with a small test report under this post. Thank you in advance and all of you a happy new year 2020! ????