Moon lamp: LED lamp with moon map as a gadget for moon addicts 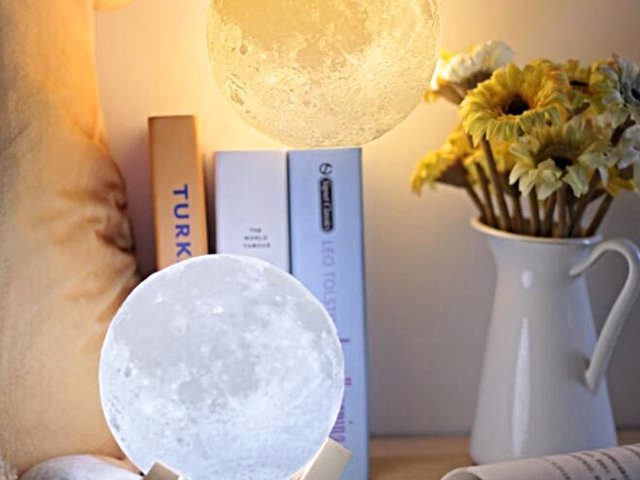 For all science fiction friends among you and those who, like me, liked to get closer to the moon with binoculars and later with the telescope, the LED moon lamp described below is the right gadget. Even if you still have a cool one Last minute gift for Valentine's Day for the girlfriend or boyfriend, the lamp with moon map is a cool idea.

Moon lamp with LED and touch control: the ideal gift for moonstruck people and sci-fi fans. The wooden stand is included in the scope of delivery.

The LED moon lamp has a diameter of 11 cm and, including the wooden stand, which is included in the scope of delivery, a height of 16 cm. The lamp's battery can be charged using the supplied USB cable. As a moonstruck person, you also have the opportunity to explore the earth's satellite during the day, on a cloudy night and on nights when the moon is just a sickle. By the way, you can set the light of the LED lamp in warm white and cold white and dim it individually.

Moon card and lamp in one

With this LED light you buy or give away a moon card and lamp in one. If you want to take a closer look at the celestial body, you have various options online:

By the way: If you are looking for a more neutral LED lamp with other colors that is also waterproof - and therefore ideal for the bathtub or the pool - then take a look here: AUKEY LT-ST23 LED lamp put to the test.