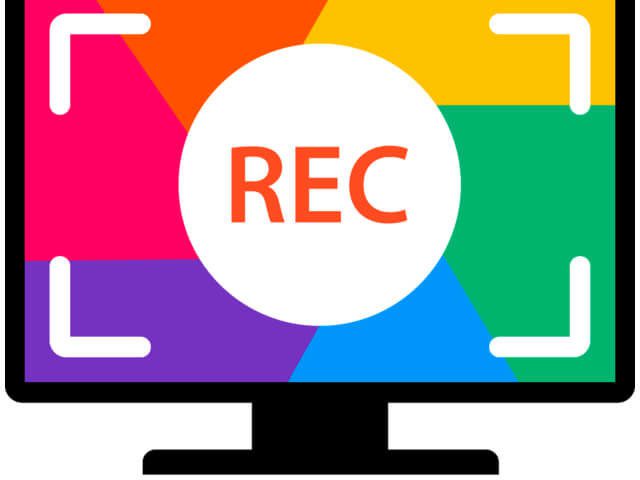 The Movavi Screen Recorder 10 is a software for screen recording on Apple Macs with macOS as the operating system. In the following review, I'll show you my experiences with the app. In addition to screenshots, you will of course also see two sample videos that I made with the recording software for the Mac screen. But as a result of my Movavi Screen Recorder 10 test you will also get a lot to read. In the following, I will go into the advantages, disadvantages and neutral points of the program. If you have any questions, please leave a comment.

The Movavi Screen Recorder 10 for macOS in the test. Information on installing, using the screen recording software and outputting videos can be found here.

Who or what is Movavi?

Movavi is a software company that develops and publishes multimedia programs for a wide variety of user groups. The company is not only targeting Apple Mac users, but also offers screen recorder apps, photo and PDF editors as well as video converters, video libraries and video effects for use on Windows PCs. Movavi was founded in 2004 and has since grown to over 300 employees. There are also some partners, the largest of which are on names such as Intel, Google, Amazon and NVIDIA Listen. The individual software products for multimedia solutions on the Apple Mac and Windows PC have already been sold in over 150. Of course, this also includes that Movavi Screen Recorder 10 for macOS.

My Movavi Screen Recorder 10 test started by downloading and installing the app. The download can be found by means of this link. There you can download a free trial version. However, I have upgraded the app with a chargeable activation code so that I can use it indefinitely. By the way, when installing the software - depending on the security settings on your computer - you have to allow the loading and installation of system software. Here the whole process in screenshots: 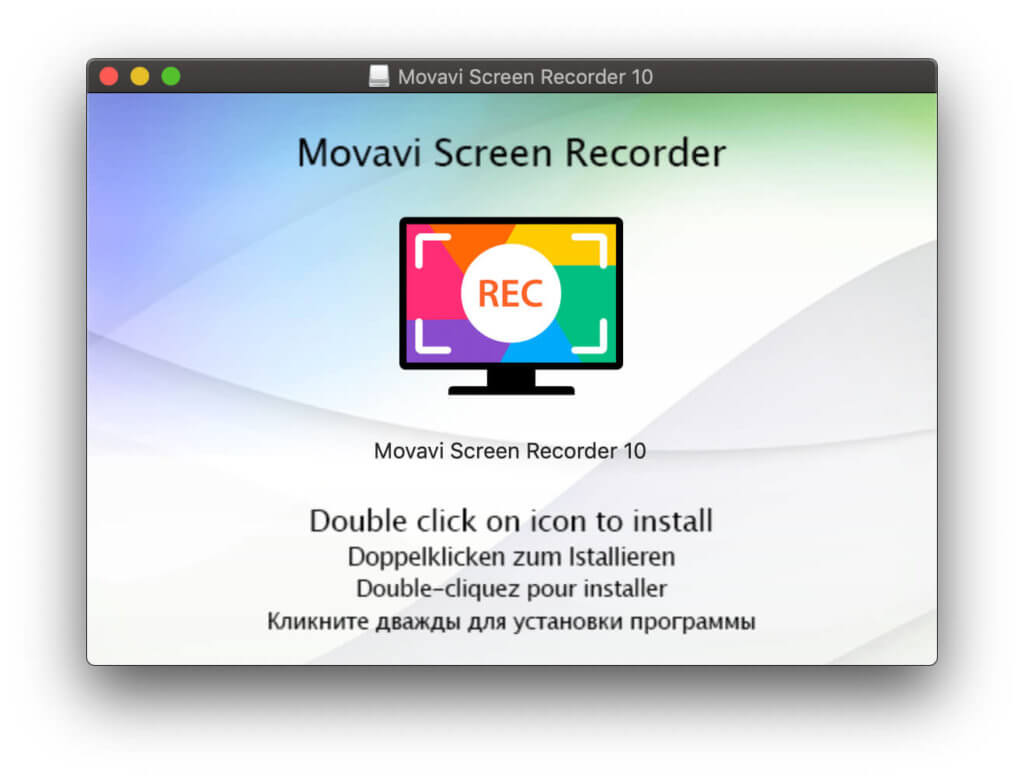 Right from the start, you are clearly guided through the installation.

If a system extension has to be installed, permission from the admin is required. 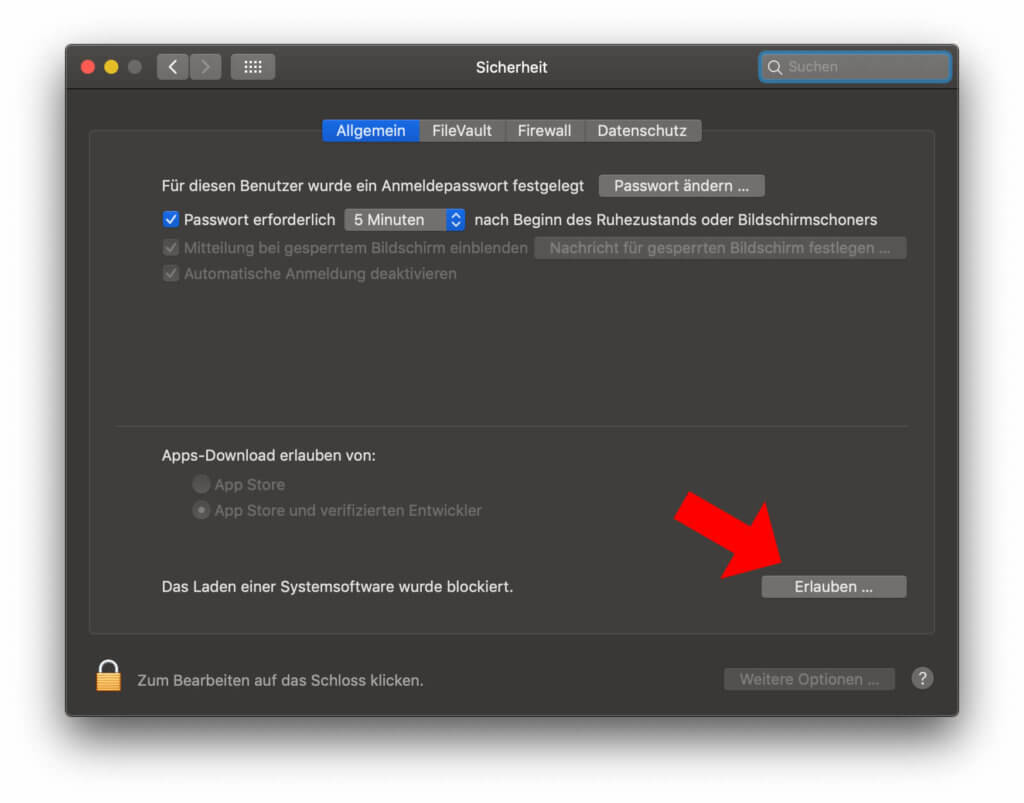 In the macOS system settings you can allow the installation of the add-on for the Movavi Screen Recorder 10. 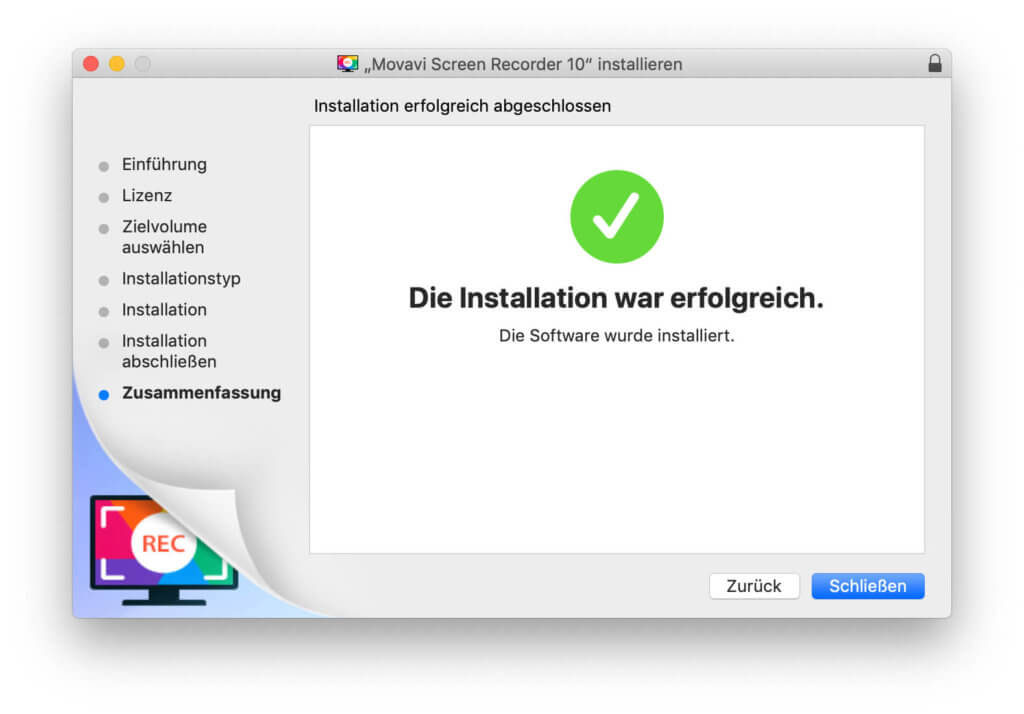 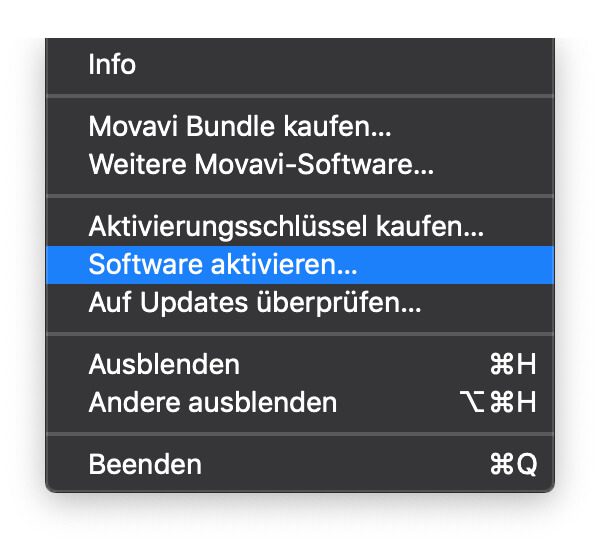 You can quickly activate the full version via the menu bar.

The user interface of the Movavi Screen Recorder 10 is tidy and intuitive to use. At first glance, there is nothing that confuses or leads you astray. I like that. The control console has all the buttons and fields necessary to get started right away. In summary, the following functions can be carried out with it:

In addition to the program window shown above, it is also practical to use the menu bar to take recordings and screenshots. The keyboard shortcuts with which you can start or pause a recording, take a screenshot and exit the app are also shown there: 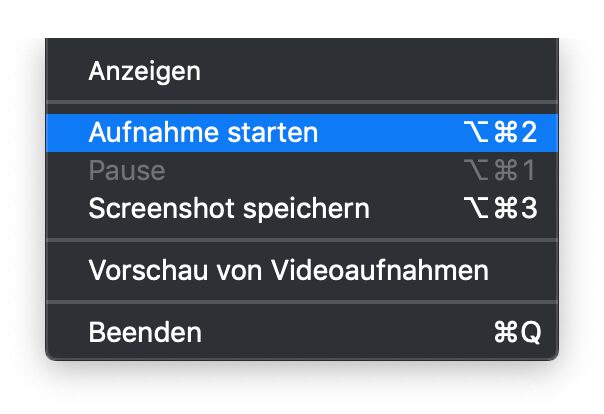 Extensive options in the settings

Without wanting to go into the full scope of the settings, I would like to mention them at this point. In the settings window under “General” you can, for example, activate or deactivate a countdown, activate and deactivate the blinking of the frame around the recording area and set / remove other basic ticks. The storage path for videos and screenshots is specified under "Files"; as well as for the latter the format (PNG, JPG or BMP). In addition, you can customize keyboard shortcuts, set the frame rate for videos from 5 to 60 fps and the sound quality, make webcam settings, activate effects such as highlighting the cursor when you click, and, and, and. 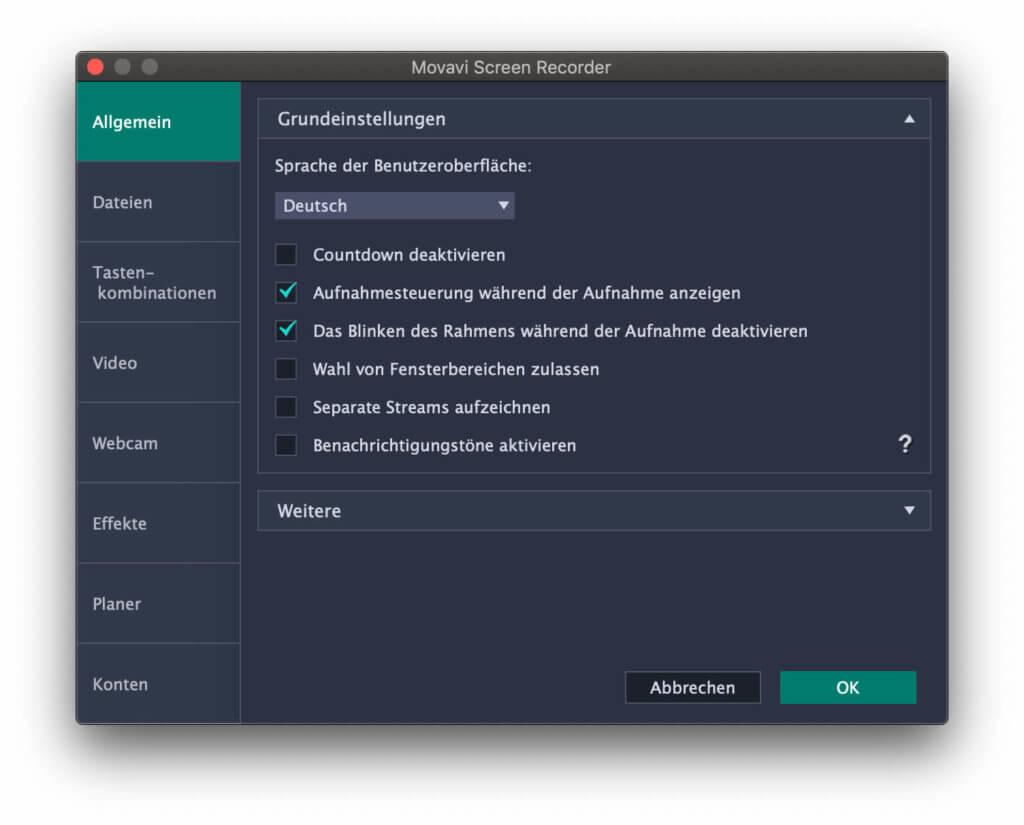 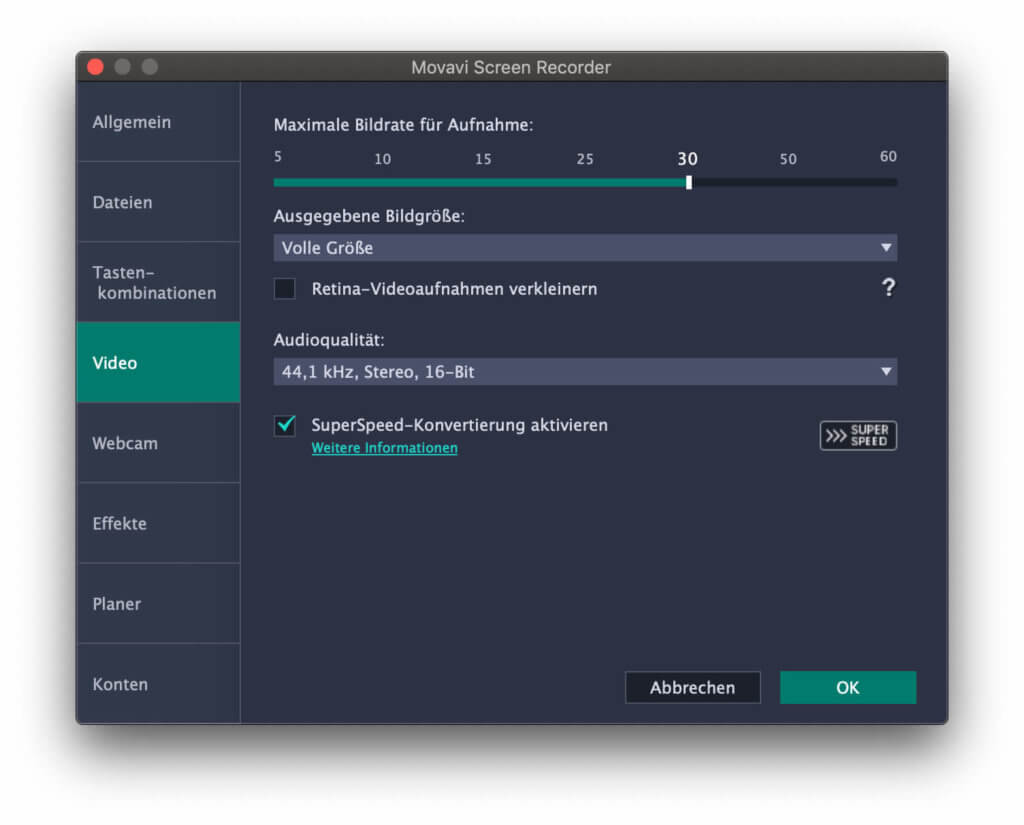 Audio and video settings help adjust the file size as well as the video quality. 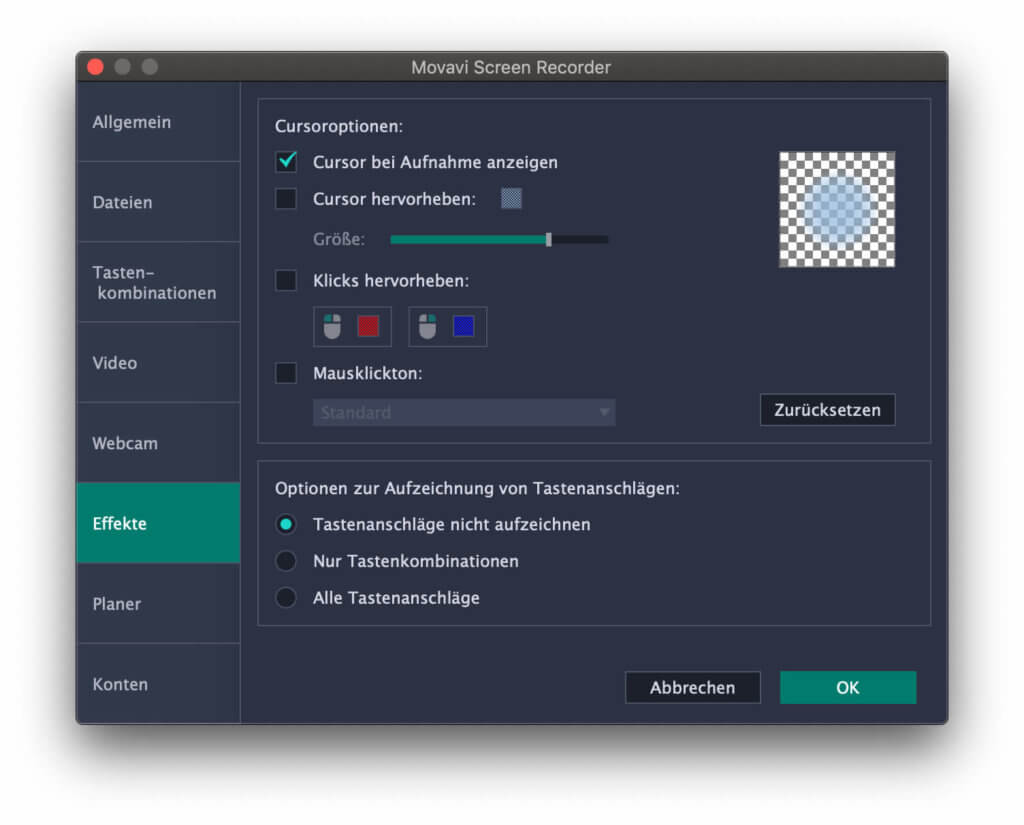 Highlight clicks and show keys used - or hide the cursor and other commands: the choice is up to the user. 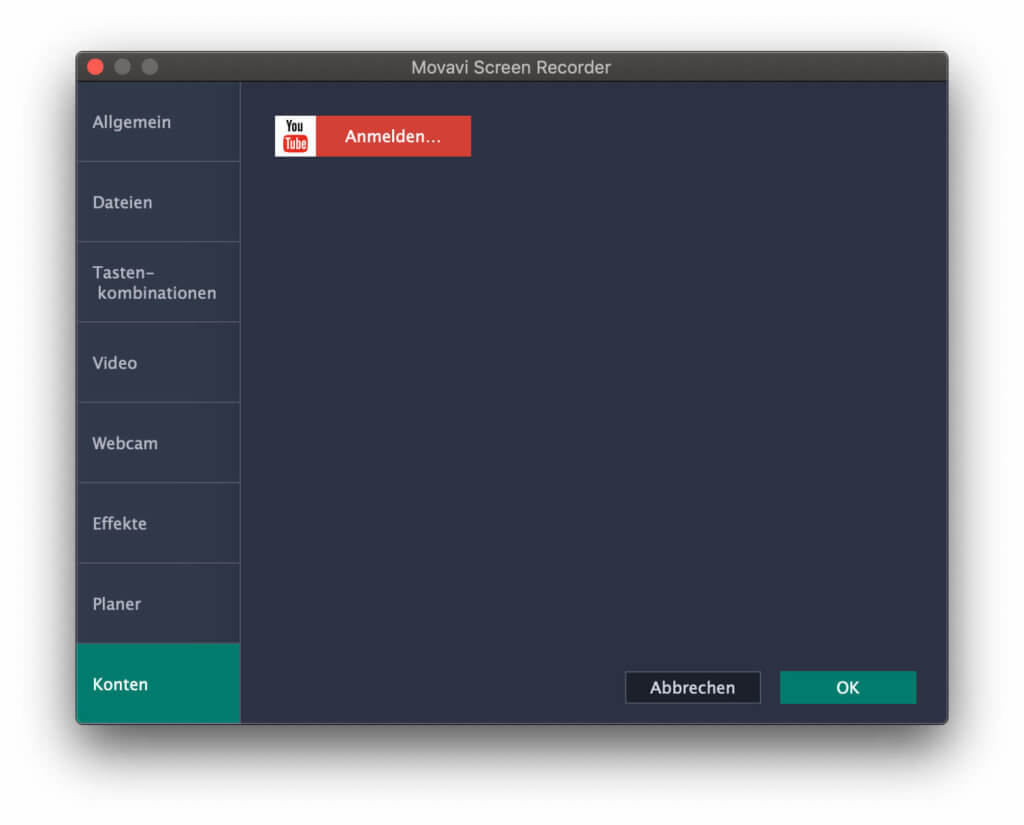 You can also link your own YouTube account to the app to quickly upload Let's Play, the tutorial or another screen recording.

I recorded the following test video - except for the image section - free of individual settings with the standard presets. It shows the creation of the image shown at the very top in Affinity Photo. The frame rate is 30 fps and no effects are set for the cursor or the keyboard:

In the next video I chose a frame rate of 60 fps and activated cursor effects and the display of keystrokes. This type of recording is of course smoother and, thanks to the visual highlighting of individual actions, it is particularly suitable for tutorial and how-to videos: What, unfortunately, is a bit negative: Held clicks and keys (in my case the left mouse button and the shift key when moving graphic elements) were not highlighted. Only single, short clicks and briefly pressed keys (here: Remove) were displayed.

Video output with some options

There are a few options for the output, i.e. the rendering of the screen recordings created. For example, videos from the display or monitor can be saved in the following formats:

For most devices as well as for uploading to YouTube, Vimeo, Facebook and Co., MP4 and MOV are of course best. Even AVI is still okay, but not really en vogue anymore. In addition to the format, the quality (good, high, highest) can also be selected, which has an effect on the file size. 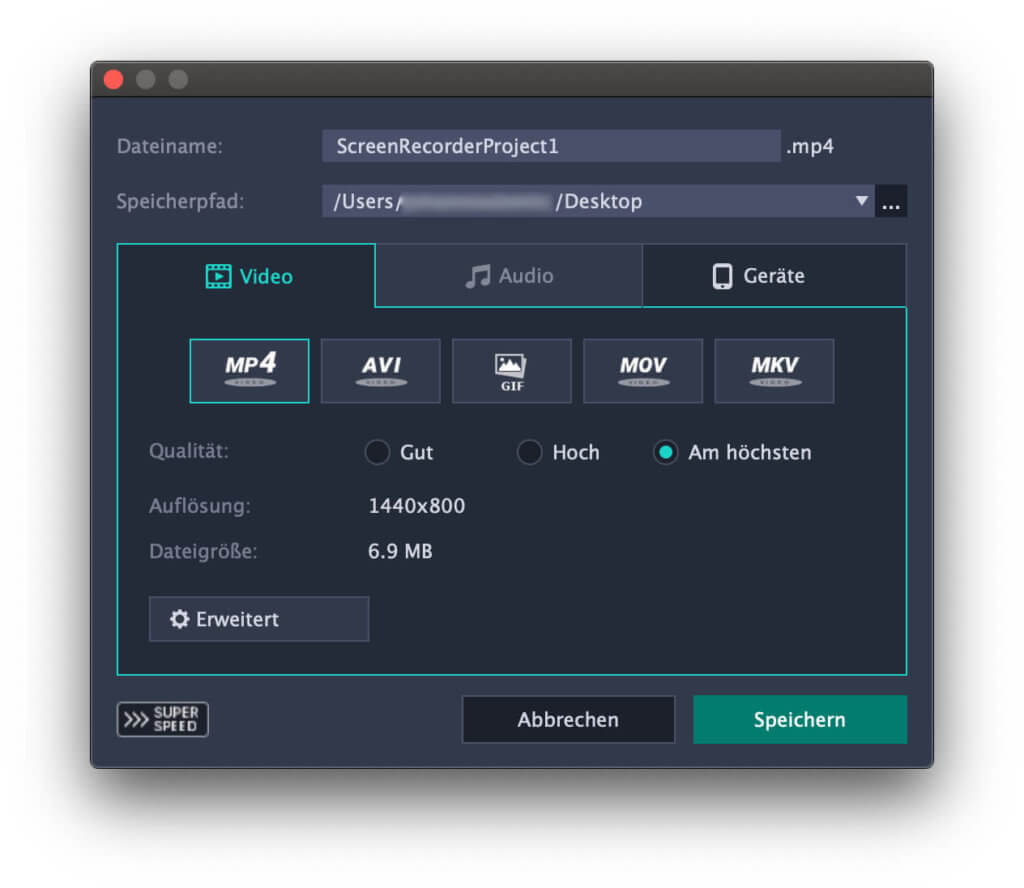 The Movavi Screen Recorder 10 for Mac comes with a number of options and settings that allow you to customize the screen recording under macOS. Whether let's play, tutorial, support request or other area of ​​application - I think that this app will hit the right target group in many areas. With the possibilities of integrating system audio, microphone audio and webcam recordings, there are many more possibilities than those shown in practice in this test report. What do you think? Feel free to leave a comment on the Movavi app! :)

Update: Criticism from a reader

My reader Gunnar emailed me the following message as a criticism of the sales process, which I would like to quote here briefly:

Hello, I think it's outrageous after downloading! Movavi Screen Recorder 10 “not to show the final price. ME is the price inclusive. Pricing out VAT. Furthermore, one must explicitly deselect an insurance policy. Sad!