I've been using my Apple Silicon MacBook Pro since the day before yesterday. The first day, however, was spent tidying up my old MacBook Pro, because before I dragged all the data over, I wanted to tidy up a bit again. I always like to use the time of a Mac move to at least roughly go through the user folder and see what can be in the bin.

Cleaning up before the migration

The day before yesterday I started the migration and in the evening and the next morning I was busy checking individual programs and reinstalling them. I had left out the "System and Network" area during the migration and the missing settings resulted in error messages or warnings from many programs because they had no hard drive access, could not check their license or were in other pain. I was happy to accept this extra work because I now know that the system is halfway "fresh" again. 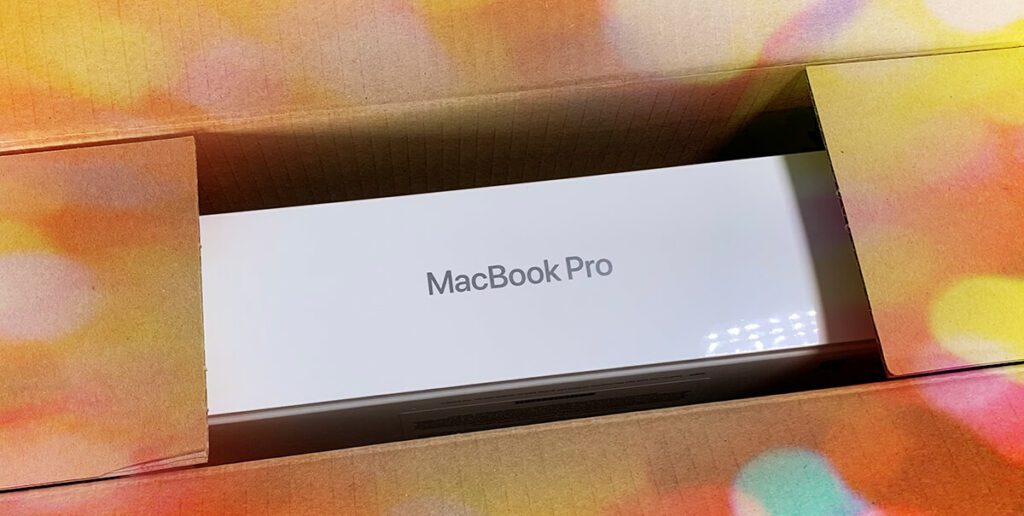 I always have a little party inside when I open the Apple boxes (Photos: Sir Apfelot).

How's the MacBook Pro? What does the M1 do?

But now we come to the subject of the report, the 1-inch M13 MacBook Pro. Visually nothing has changed compared to the previous year's models, as Apple only changed the innards. I would have liked to see you throw the Touch Bar out again and install the function keys, but unfortunately nothing happened in that direction. But something much more important has already changed: the processor architecture.

Of particular interest here is the first Apple silicon chip, which - as it is the first of its kind - is called "M1". Even if it is the first M1, it is probably based on the A14 that can be found in the current iPhone 12 models. And this one is - incredibly fast.

My iPhone Xs gets bored most of the time when I use it, but the iPhone 12 Pro will probably just twiddle its thumbs even when it comes to 4K video editing. So it was time Apple finally put these chips in Macs where they actually get something to do. 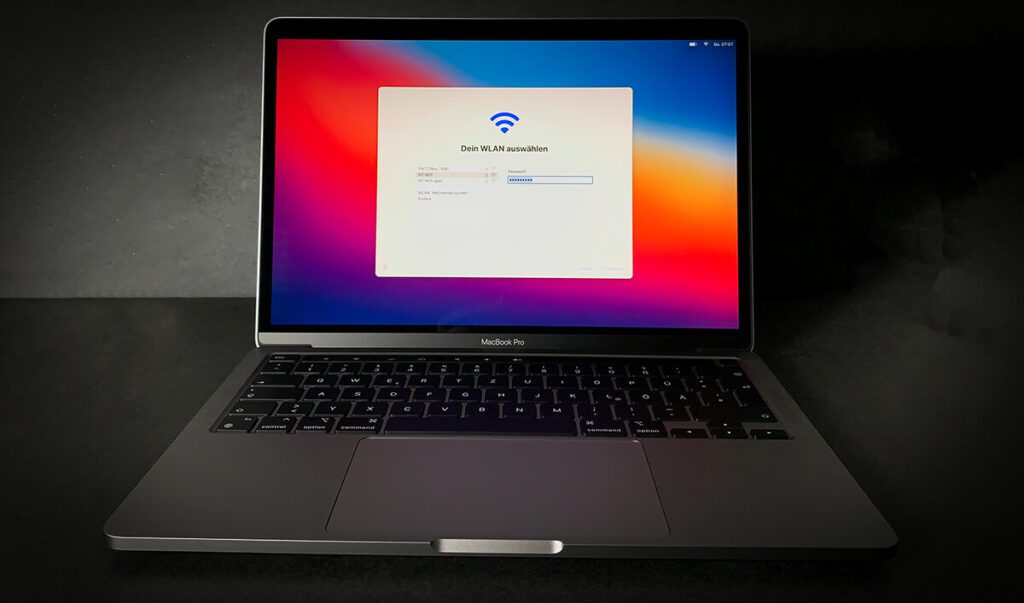 Outwardly, little has changed in the MacBook Pro design - but the important things are inside: the M1 Apple silicon chip.

The Geekbench program carries out a compilation of different tasks, measures the time the computer needs for them and then outputs a value in the form of a number. On the Geekbench website one can find a brief explanation that DeepL has translated as:

Geekbench 5 measures your processor's single-core and multi-core performance for everything from checking your email to taking photos to playing music, or all at once. Geekbench 5's CPU benchmark measures performance in new application areas like augmented reality and machine learning so you know how close your system is to the forefront of progress.

The results from Geekbench are therefore interesting for comparing the current Apple Silicon Macs with the Intel Macs.

I watched various videos in which Youtubers let the MacBook Pro with the Apple Silicon Chip compete against other Mac models. I just want to take a screenshot from the Video from Appleinsider share which shows how fast the M1 processor actually is:

So the bottom line is that there is no Mac in single-core mode that can even come close to holding a candle to the MacBook Pro. Even the Mac Pro from 2019 is topped by almost 100 percent. For intensive computing tasks, however, the multi-core value is important, because programs like Final Cut, Premiere, Cinema 4D, Maya or something like that, the Macs throw all the cores they have into the ring to solve the problem.

In the multi-core tests with Geekbench it doesn't look so blatant, but the small MacBook Pro is still very close to the Mac Pro, Apple's current computing monster, which costs over 6000 euros even in its smallest configuration. For comparison: the small MacBook Pro costs just a quarter of that.

The multi-core results of the M1 chip with 8 cores are not quite as clear as the single-core measurements, but still do not need to hide.

How does the M1 MacBook Pro perform in everyday life?

Geekbench results are all well and good, but it gets exciting when you look at the device in everyday use and I now had two days to do so. In fact, I am also typing this text on the device.

I can answer this question with "yes", because my MacBook Pro is in the corner and I only work on the Apple Silicon MacBook Pro. The smaller screen size of only 13 inches compared to the 15 inches I had before is not so important for me, as I work on the external monitor most of the time anyway. For me it was crucial that I could have many programs open at the same time. These include a few memory hogs such as Adobe Photoshop, Firefox, Chrome or Microsoft applications.

The MacBook Pro copes with it perfectly. It is even noticeably faster in everyday life. I already had the feeling with the old Intel MacBook Pro that macOS Big Sur brought a little speed improvement. But since Big Sur has been optimized for the M1 Macs, you will of course notice another increase when you switch to an Apple Silicon Mac.

Some apps, such as Adobe's Photoshop, are still waiting to be optimized for Apple's M1 chips. Until then, the universal translator jumps "Rosetta" and makes the programs for Apple Silicon executable.

Not everything is faster (yet) ...

My wife works a lot with large Photoshop files and is currently still struggling with a 2013 iMac that is constantly throwing the beach ball. We wanted to test how the speed differences are noticeable when using Photoshop and have opened a 2,5 GB file on all three Macs - including starting Photoshop.

I measured the following results with the stopwatch:

As you can see, the M1 chip is fast, but it cannot show its performance here, as Photoshop will not come in a version that is optimized for Apple Silicon Macs until 2021. In the transition period, Rosetta “translates” the program for the Apple CPU, which of course costs computing time.

In between reading tips: 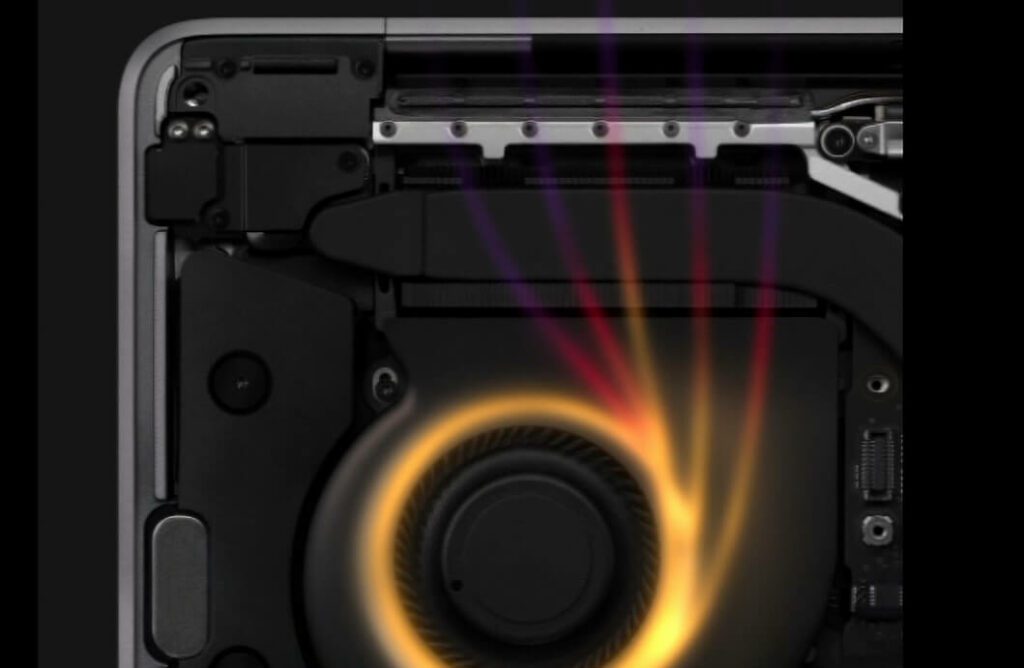 According to the data sheet and Apple advertising, the 13-inch MacBook Pro has built-in fans on the left and right, but I haven't heard any of them to this day. And it's not just me ...

An extremely remarkable feature of the M1 MacBook Pro is the volume, because the device is completely silent even under full load. It has built-in fans, but the M1 chip works so efficiently that the fan does not start even when rendering video.

The Intel chips, on the other hand, are real power guzzlers, because when I started Geekbench on my 2017 MacBook Pro, the fan noise not only made it sound like I was at the sea, but I could also fry fried eggs on the metal bar above the Touch Bar. I didn't do it, of course, but the CPU was already extremely warm.

No noticeable waste heat with over 600 percent CPU load

I tormented the MacBook Pro with the M1 chip with Geekbench and added a video at the same time iMovie rendered. In certain Geekbench tests, the CPU load was even over 600% in places - but you only felt a slightly warm spot on the bottom of the MacBook Pro. However, the fans have still not started. 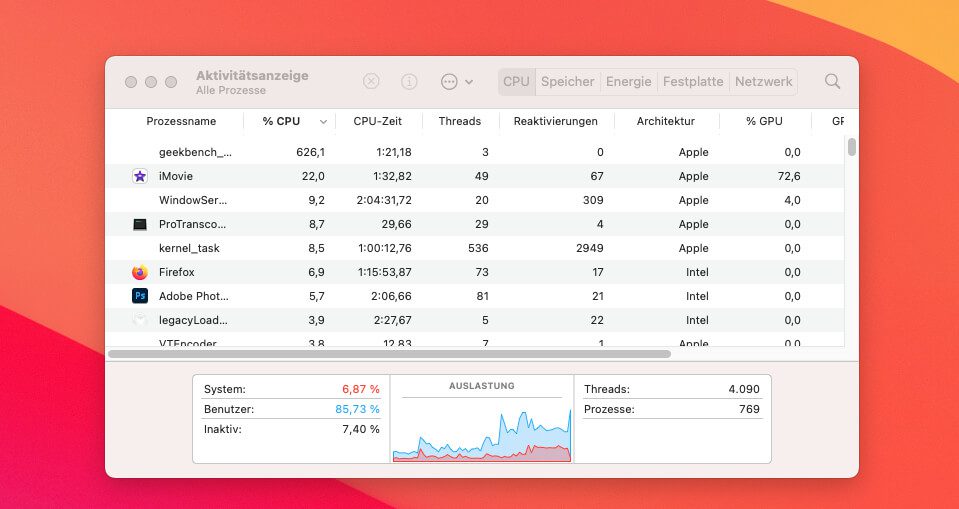 The MacBook Pro with the M1 chip is as quiet as a mouse - even if you give it something to do.

I've tried all sorts of software on the new MacBook Pro that I use here and there. The only thing I've found that steadfastly fails is Parallels Desktop. Even version 16 runs with Big Sur, but unfortunately not with the Apple Silicon Macs.

On the one hand this is bad because my invoicing program has been running under Windows with Parallels for years, but on the other hand it is good, because now I can finally draw a line under the matter and delete Parallels Desktop and Windows from my Mac life forever. Sometimes you just have to be forced to make decisions.

Parallels Desktop can be opened on the Mac, but when you try to open your Windows virtual machine, you get this error message.

My conclusion on the Apple Silicon MacBook Pro 13 inch

I have to say, I'm really excited about what Apple has achieved here. When I think of the earlier switch from the PowerPC platform to the Intel chips ... that was perhaps a painful story. This time, however, the changeover is going really well. This is not really surprising either, since Apple has been working on getting macOS to run on the iPhone and iPad chips for years.

Now Apple has finally managed to become processor-technically independent. This opens up completely new possibilities for Mac users. For example, if you were to run an Intel processor with 64 cores, you could buy a cooling system with liquid nitrogen and half a nuclear power plant. An Apple silicon chip with 64 cores, on the other hand, should still be easily feasible as a laptop if I look at the battery life of the new Macs.

I am happy that I bought the Apple Silicon MacBook Pro. Except for the Parallels Desktop dropout, I haven't had any bad experiences with the device. Everything runs very smoothly and the MacBook Pro comes back from sleep as quickly as you are used to from an iPad or iPhone. Speaking of iPad and iPhone: I haven't tried the function that I can now run iOS apps on the Mac, but there will be a little report on this soon.

Can you recommend the new 13 inch MacBook Pro or not? From my point of view, the new Apple Silicon Macs have definitely been given the go-ahead. Only people who have the Mac in a fixed workflow and do not want to take any risks should perhaps use Intel Macs again. I don't count myself among them and I was willing to take risks - it was worth it.