My first ride on the Future Motion Onewheel Pint 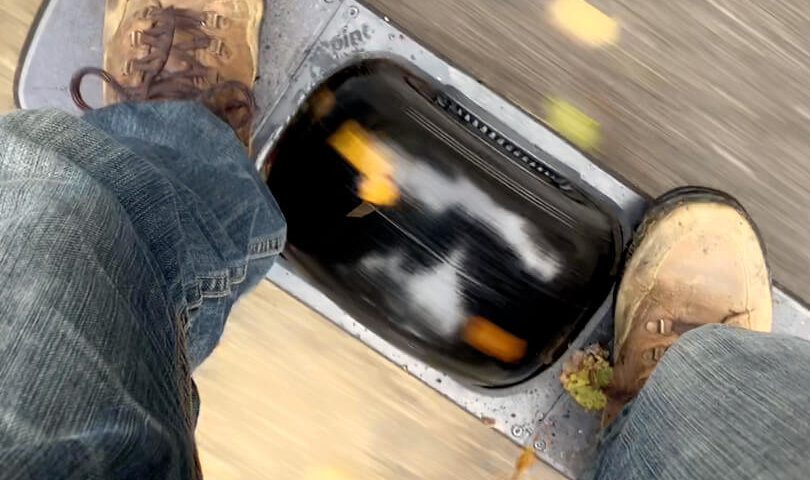 After I was able to gain some experience on electric unicycles last year, this year I bought a new gadget that is also self-balancing and equipped with an electric drive: The Onewheel Pint from Future Motion. At just under 1200 euros, it is significantly cheaper than its big brother (Onewheel XR), which costs just under 2000 euros.

At this point a reference to the shop "SUPshop24-7.com", where I ordered the pint. The Onewheel Pint has only recently been on the market and I wanted to get it fast, although it was not yet available in Europe. While researching, I came across Michael's shop, the Onewheel has been in the range since 2016. He was one of the first retailers to deliver the pint to Germany. If you are interested in the Onewheel Pint, get in touch with him and maybe he can set up a small discount for Sir Apfelot readers.; -)

Onewheeling is a great feeling when you have mastered it a little better. On my first trip here, I still had little confidence in my ability. : D

Why the pint and not the XR?

In terms of technical data, the Onewheel Pint is the same Onewheel XR inferior - in range, top speed and of course in terms of stability when driving (due to the flatter tires of the XR). Nonetheless, there was one thing that - besides the price - got me to the pint: It's much easier to carve around with a tire that is rounded on the sides. And that's what I enjoy about the Onewheel - the feeling that others may know from snowboarding or skiing.

This carving feeling is more important to me personally than range and speed. The lower top speed of 25 km / h compared to the XR is definitely enough for me. Even with my unicycles, I usually don't go faster and still have fun. In addition, the Onewheel Pint is even lighter than the XR and is therefore quicker to pack for a ride. 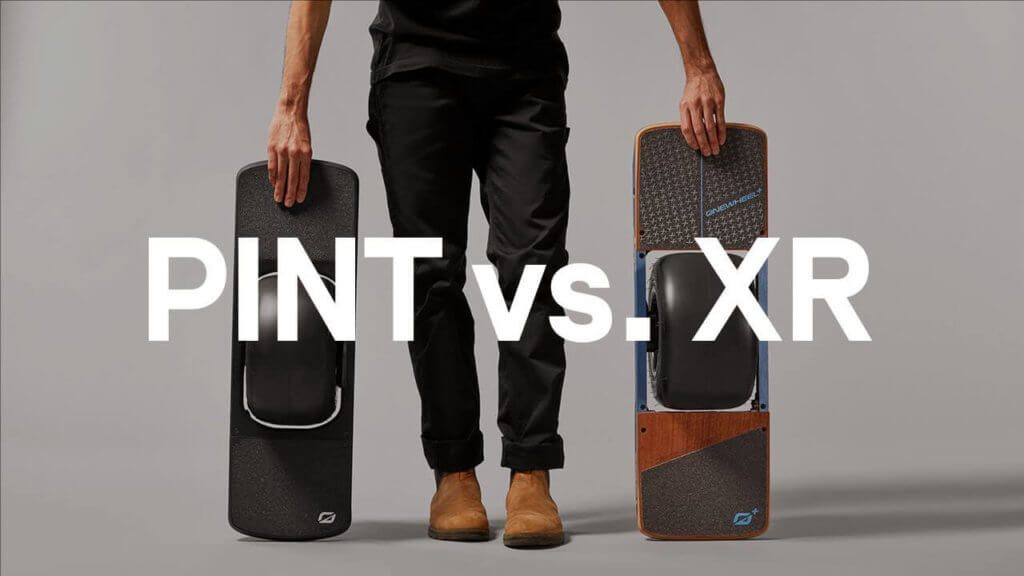 On the left the Onewheel Pint and on the right the older XR model (which will soon be upgraded) (Photo: Onewheel).

Onewheel learn in a fast run

I have no experience with snowboarding, skiing or similar sports and only got on an electric unicycle last year. To learn this, it took some patience and around 4 days of 30 minutes of "training" each time. Then I drove the first few hundred meters in a row.

I don't know whether it is the exercise with the electric unicycle or whether a onewheel is basically easier to learn, but with the Onewheel Pint it only took me about 5 minutes to ride fairly stable over a paved dirt road and the first curves to turn. 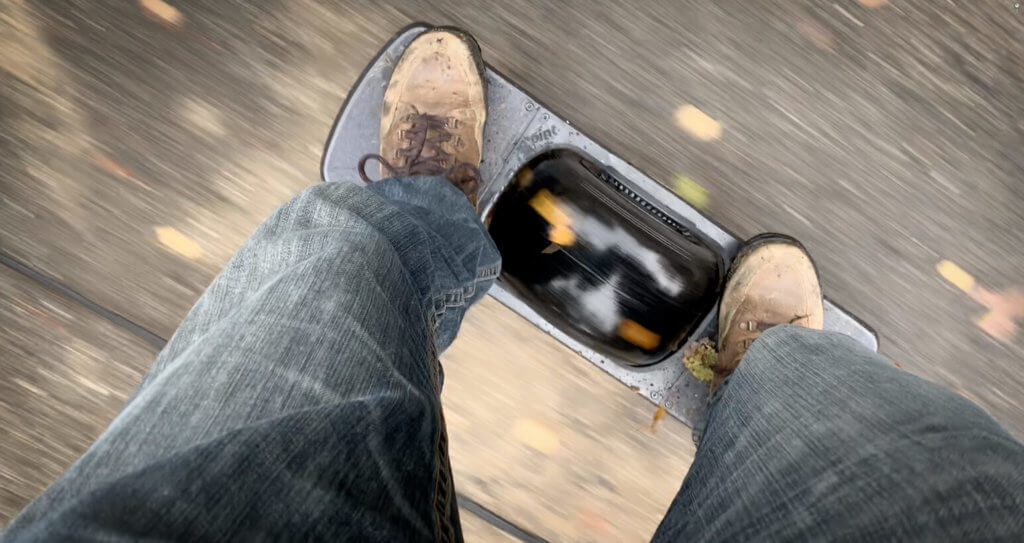 I felt comfortable on the Onewheel relatively quickly ... maybe because of the type of vehicle or maybe because I've been on electric unicycles for a year (photos: Sir Apfelot).

My first impression of the Onewheel Pint

When you see the price difference to the XR, you might think the pint is a rickety version of the XR. But this is not the case.

The device has a decent torque, accelerates well and drives very pleasantly. The processing leaves nothing to be desired. It looks neatly designed and feels valuable. The Onewheel app is also very well done and even offers the possibility to find and contact Onewheel drivers nearby. At the point my reference to directly my Facebook page for Onewheel and EUC drivers in Northern Hesse - maybe a few people can be found for trips together. 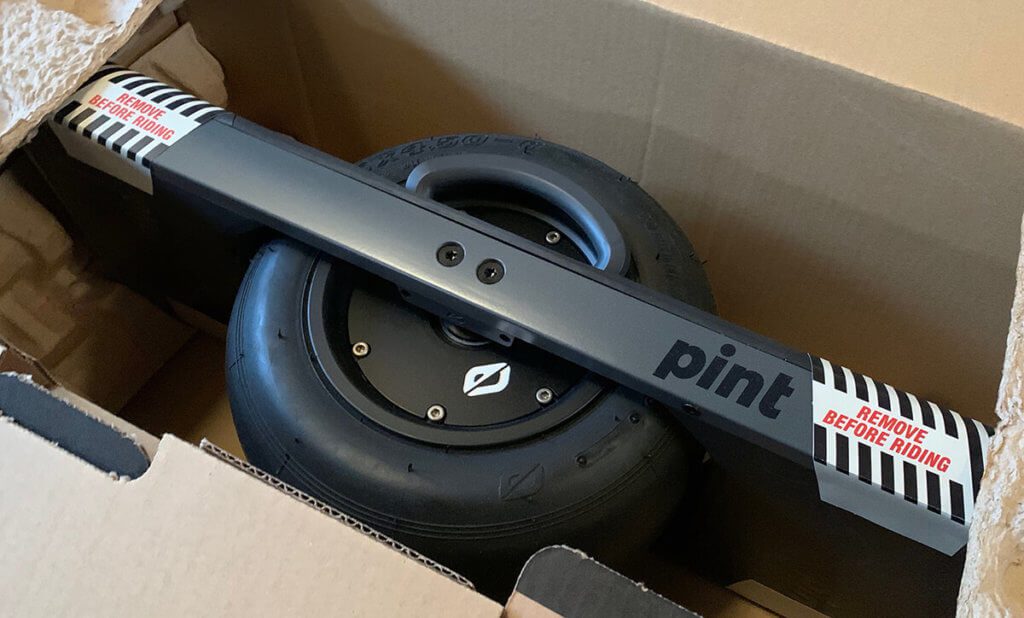 Fresh out of the box: The Onewheel Pint is the newest vehicle in my collection of self-balancing unicycles.

Only the power supply is a weak point that shouldn't have been. While you can charge the pint in less than an hour with the power pack of the XR, you need a good two hours with the weak pint power pack until the battery is filled again.

In terms of driving pleasure and other manufacturing quality, the pint is definitely worth the money. I definitely do not regret the purchase. 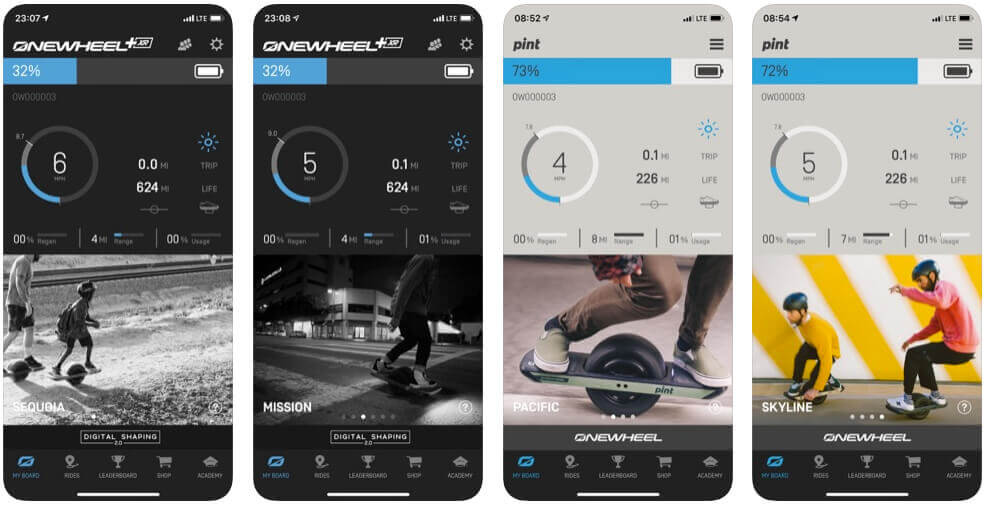 Screenshots of the Onewheel app on the iPhone - here you have the remaining range, speed and distance in view and can use the "Rider search" function in the menu to find other Onewheel riders (if they want).

How is driving on a onewheel?

I would say that you are reminded of childhood days when you once had a skateboard that after a few weeks disappeared forever in the basement. I was maybe 10 years old at the time and you could hardly call it skateboarding, because most of the time we sat with our butts on the board and then went with our feet first.

With the Onewheel Pint, it's something different: you don't have to keep your feet moving and steering is much easier thanks to the one central wheel. Once you get used to driving, you feel like Marty McFly on the hoverboard. You can slide until the battery is empty - or what is more likely in my case: until the dirt road ends or your feet hurt from standing.

Somehow you feel comfortable on the device very quickly, but you shouldn't drive too fast at the beginning because you can stagger from inconspicuous bumps.

My conclusion: skateboard of the future

For a long time I was pondering whether I should still buy a onewheel despite the electric unicycles I already have. In the end, however, I thought that driving would be something completely different. And I wasn't wrong about that.

On the one hand, you stand differently on the board than on an electric unicycle and this alone gives you a different riding experience. On the other hand, the onewheel is more demanding than a unicycle, especially off-road. Due to the large wheel, a unicycle can cope with much more bumpy stretches than a onewheel can.

But that is also my hope, because when I ride country lanes with the unicycle, it requires less physical effort than with the onewheel. And I would like to "do" more when I drive.

For me, the Onewheel is a vehicle that feels a bit like the "future". It looks like a skateboard, but without the annoying bumping into it. In addition, the large wheel allows you to tackle off-road routes (if you have mastered it from driving) - something that was unthinkable with normal skateboards. But the more uneven the route, the more you are challenged as a driver. 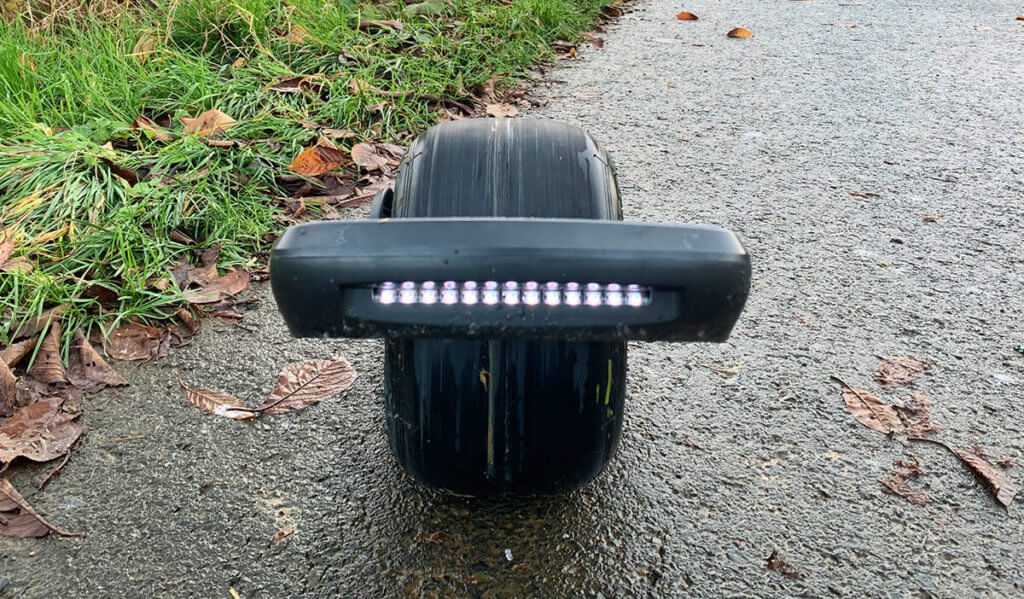 The front LEDs of the Onewheel Pint are more "to be seen". To illuminate the path, I prefer to use a bright headlamp.

Balance training with a fun factor

As a desk worker, such off-road trips, where you work a lot with balance, are a little wellness cure for your back. It is now recognized that balance training ensures better stability and coordination and can thus also prevent or improve back problems.

With two herniated discs, I'm definitely in the target group for back training and with the onewheel you can combine playfulness with training.

So my first experiences with the Onewheel went well overall, but after 30 minutes of riding there is little that can be said. For this reason, just use this little article as a short interim report. There are sure to be more items for the Onewheel Pint soon.