My favorite photos that I took with the iPhone XS - #shotoniphonexs 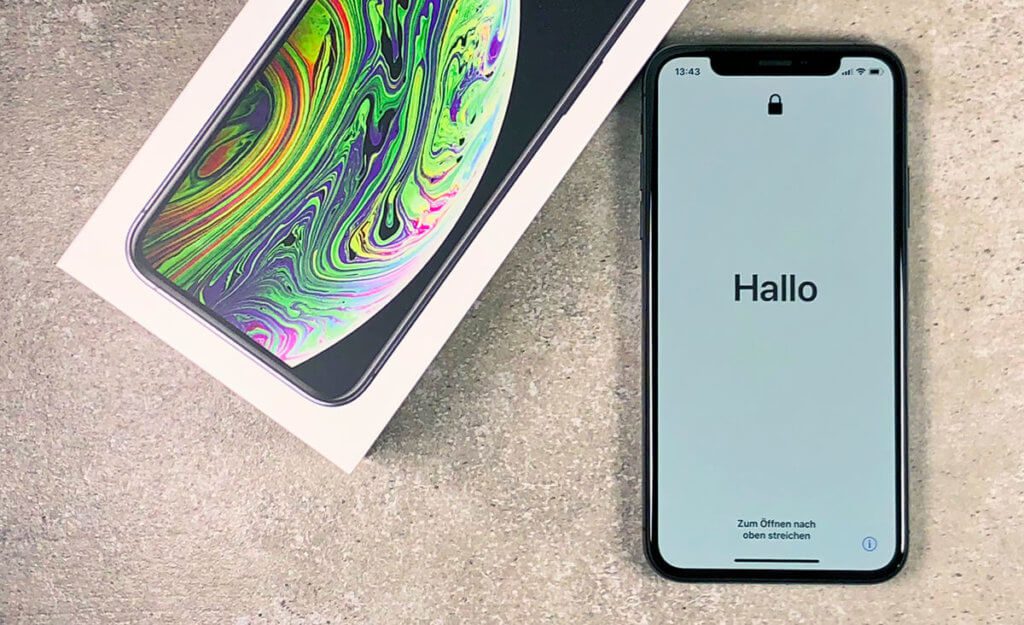 The better camera and smart HDR were the main reasons for me to switch from the iPhone X to the XS. I have to say: It was worth it (Photo: Sir Apfelot).

I had carried the idea for this post around with me since the iPhone 7 Plus. I find a collection of favorite pictures taken with a certain iPhone model very interesting because it shows which photos are possible with the respective device - even if there is a bit of post-processing here and there. But mostly it's just global color or exposure settings. I didn't create any masks in Lightroom for any of these photos and edit certain areas individually. I usually lack the muse for such things.

The development of photo quality in smartphones

I've been using the iPhone as my "always with me" camera since the iPhone 5 and I'm always thrilled to see how the image quality has improved over the years with each new iPhone model. I was particularly happy when my stepdad - who has been a fan of Leica cameras for many decades - looks at my iPhone photos and then says things like "It's unbelievable what kind of photos these little things take!" says.

Of course, there are worlds between a Leica full-frame sensor and the small iPhone sensor, but the post-processing that smartphones are now doing brings a lot out of the photos. In my opinion, the smartphone cameras are good enough for the usual screen resolution and small photo books, but the smartphone photos would not withstand a comparison with a high-resolution full-frame sensor. However, the development of camera sensors and, above all, automatic post-processing continues: With its post-processing in the Google cloud, the Google Pixel 3 makes it clear that even taking pictures at dusk is no longer the limit of smartphone photography.

Ultimately, you always have to keep in mind that I wouldn't have taken most of my photos with a large DSLR because I simply wouldn't have had them with me. I always take the best photos by chance on walks or when I'm out in the garden for a moment. On such occasions I always have my iPhone with me - but certainly not a 2,5 kg DSLR.

By the way, I almost never do it RAW photos with iPhone. The export from the photo library is somehow too complicated for me. I can drag and drop the JPGs from the media library, while I always have to export the RAW files via the menu.

Featured iPhone photos from my archive

As already mentioned, I would like to finally show you a few photos that I took with the iPhone XS. Some of them have been reworked and some not or hardly at all. As far as I can remember, I'll write about what I did with the photo in terms of editing. This post here is constantly being expanded so that you can always find the latest photos at the top. Should there be new photos, I will post the post with a new date from time to time so that it can be included in the Sir Apfelot app appears as a new post. 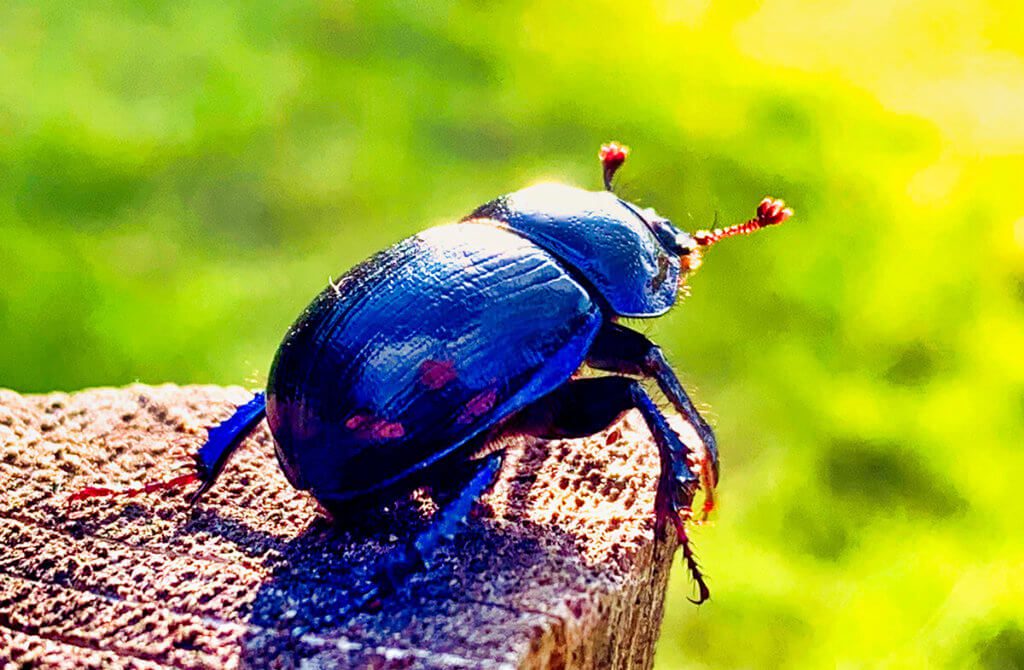 The beetle was found near a cow pasture. The photo was snapped and cropped with the 2x lens to enlarge the detail. The editing was done by the "AI Auto Enhancer" of the Luminar Flex Photoshop plug-in (Photo: Sir Apfelot). 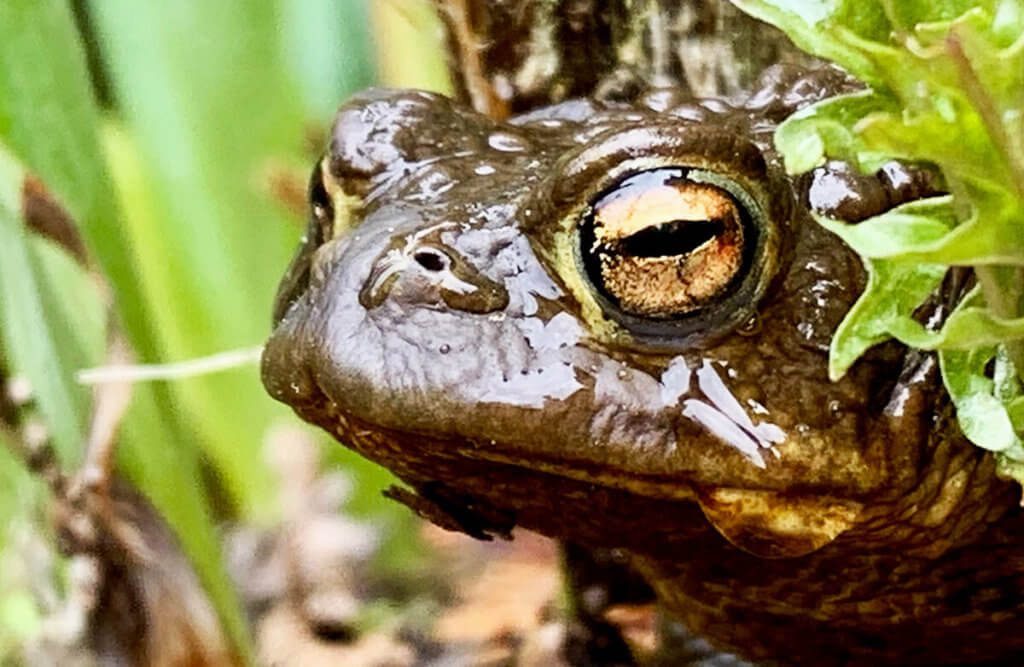 The frog was sitting by the pond and wasn't a bit camera shy. You could even stroke him and he stayed seated. I took a close-up with the iPhone-Tele and then selected the image section again. Otherwise, only more color saturation was set and the photo was ready (Photo: Sir Apfelot). 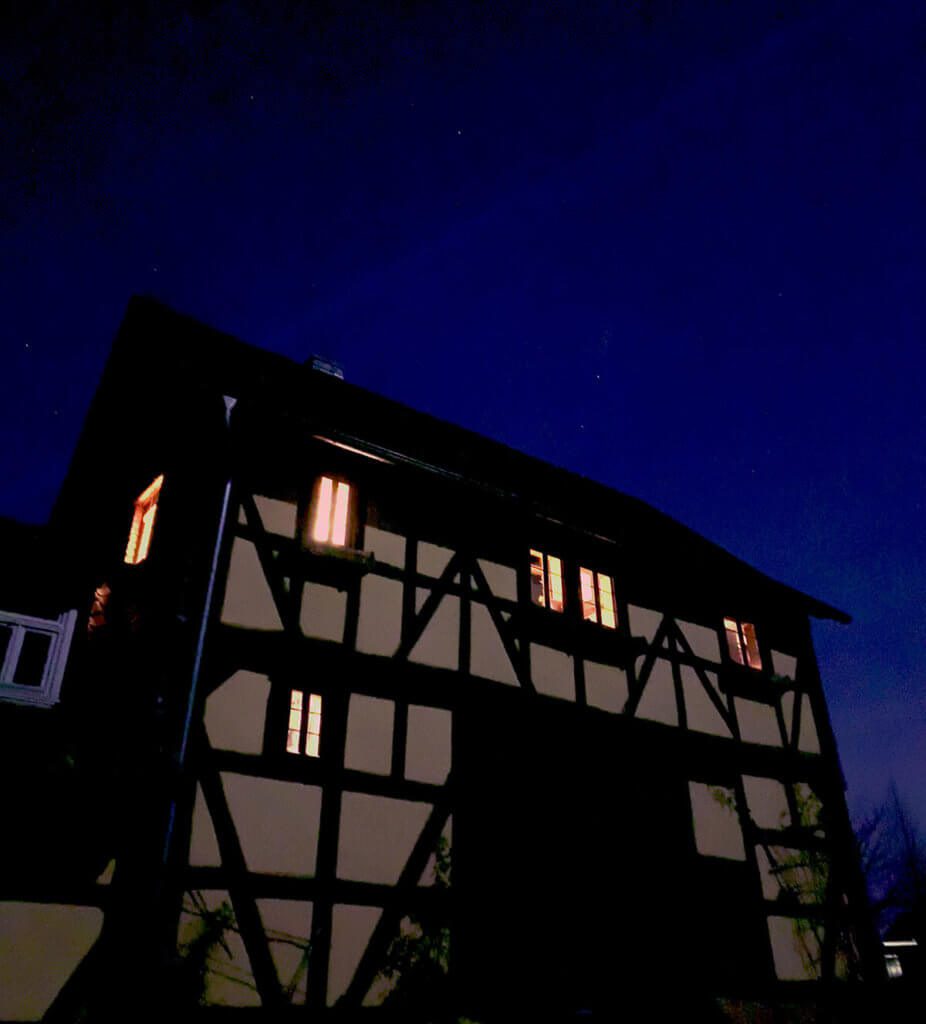 The optics of this photo are less than that, but I was surprised because I took it in the dark with the "Slow Shutter" app. The stars in the sky are not built in afterwards, but were photographed. I edited the photo with a quick filter in the "Picnic" app (Photo: Sir Apfelot). 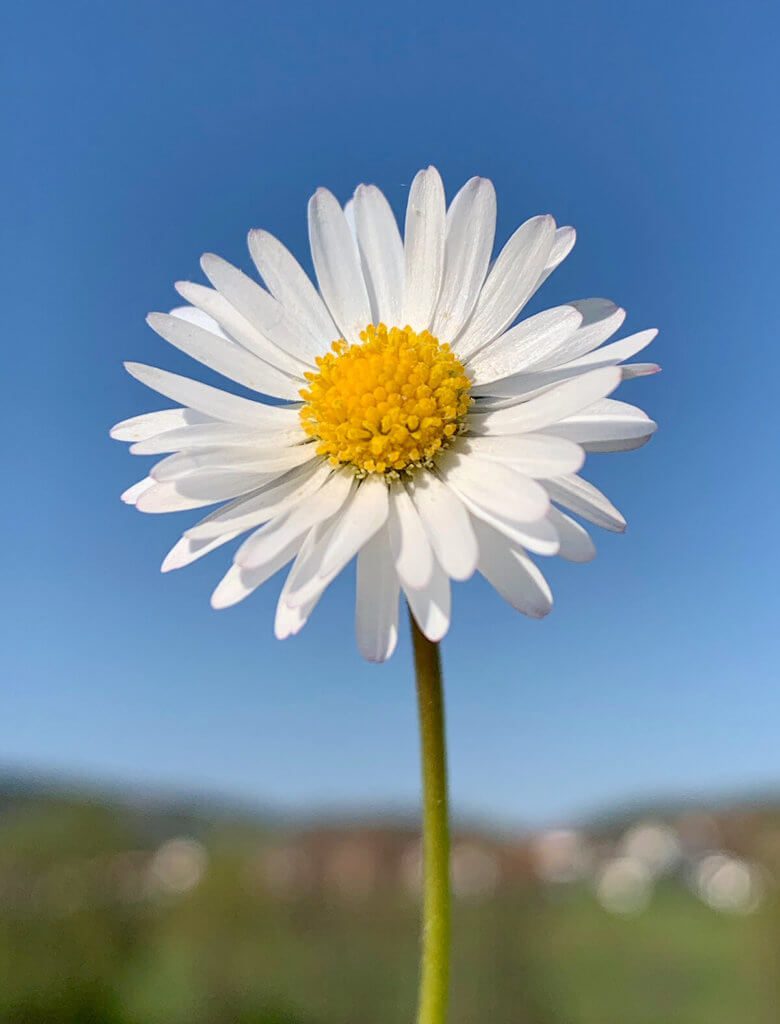 Surprisingly, the motif came out of the camera roll almost exactly like this. I only made minimal changes to the exposure and the crop. The good weather was certainly decisive for the blue sky to harmonize with the daisy (Photo: Sir Apfelot). 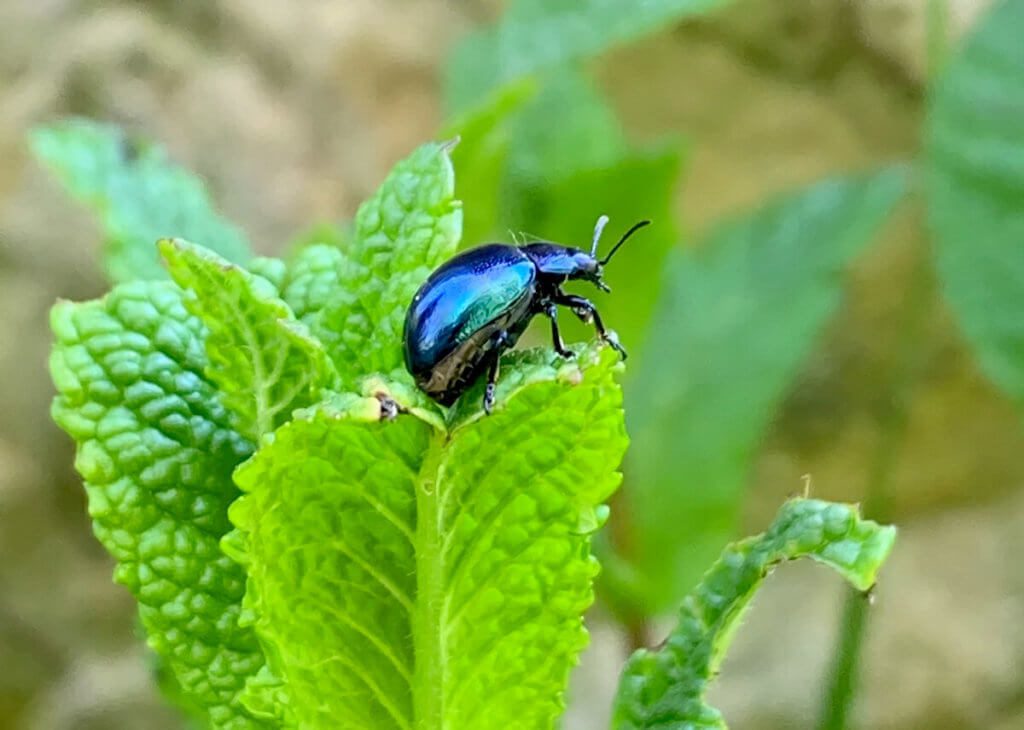 A beetle on Moroccan mint: Unfortunately, the telephoto of the iPhone XS is not enough to take full-frame photos of the beetle. For this reason I had to cut the cutout heavily here. I really hope that with the next iPhone you can get closer to the subject and that the autofocus still works (Photo: Sir Apfelot). 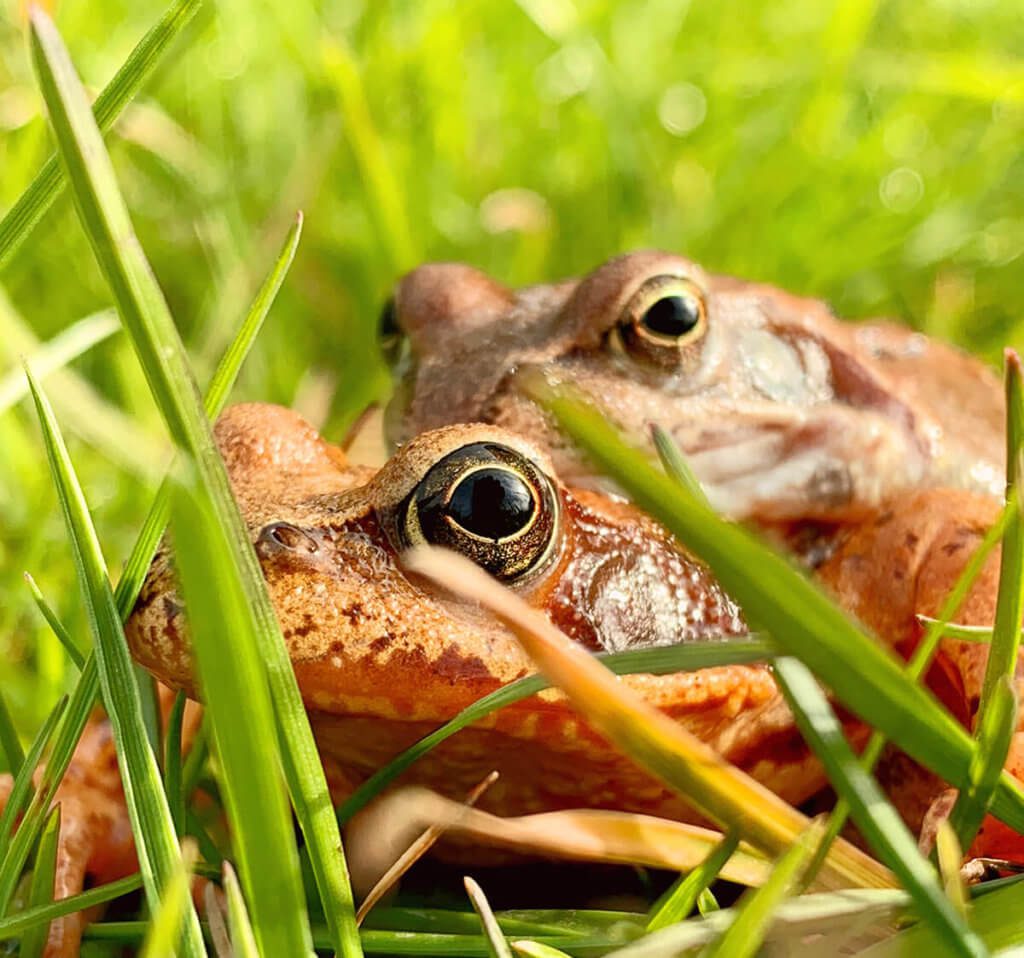 A couple of frogs again. I caught them both in the morning on the lawn in the garden. The picture was taken with the 2x lens and the section was enlarged again a little. To do this, I made the colors a little warmer (Photo: Sir Apfelot). 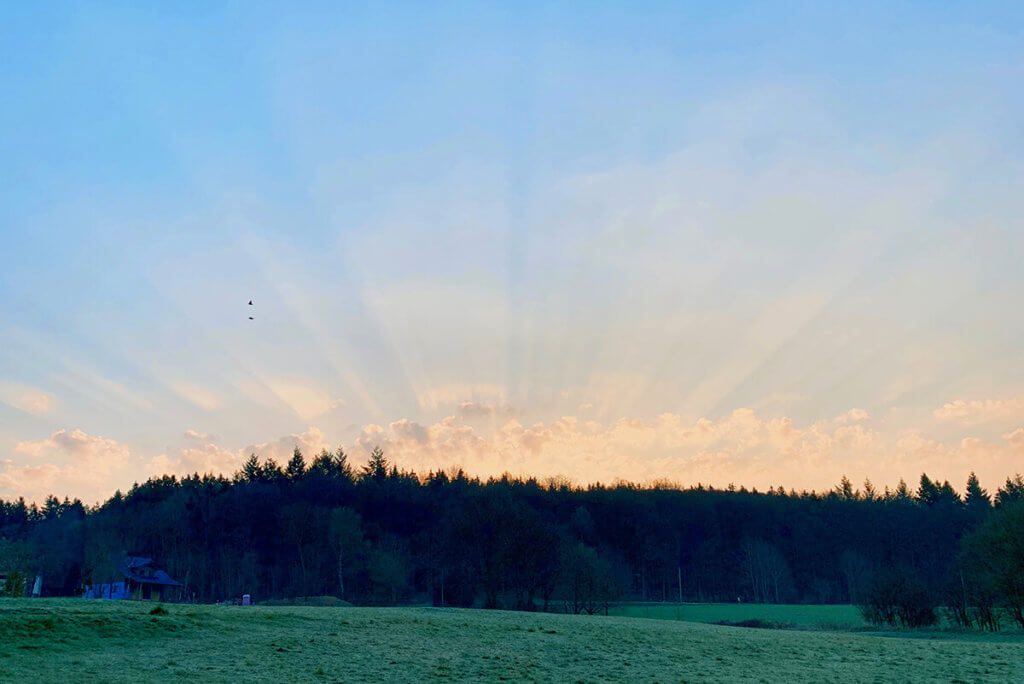 In this photo, I was particularly fascinated by the rays that were created by the clouds. It was originally in portrait format and I cut it to landscape format (Photo: Sir Apfelot).

In the following photo you have a nice example of what Smart HDR can do with photos. With my iPhone X, such motifs always went "wrong". Either what the subject is underexposed in the front or the sky in the background is overexposed. In this photo I just changed the colors and the exposure slightly. Smart-HDR has already prepared everything else perfectly. 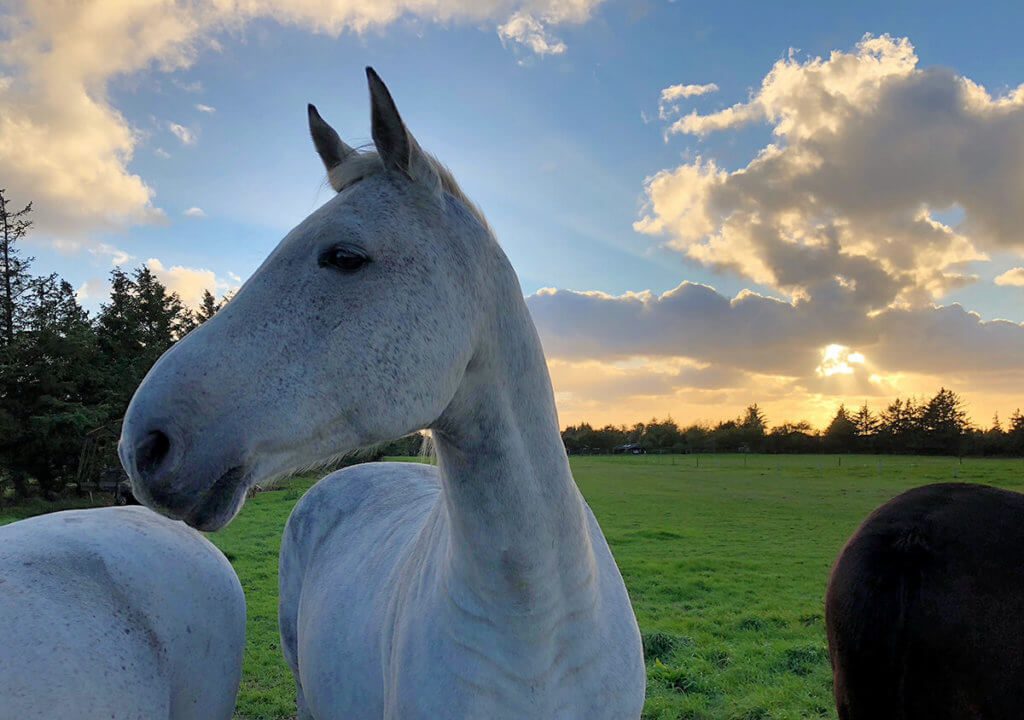 Horses in the sunset in Denmark - only possible with the automatic Smart HDR in the iPhone XS (Photo: Sir Apfelot). 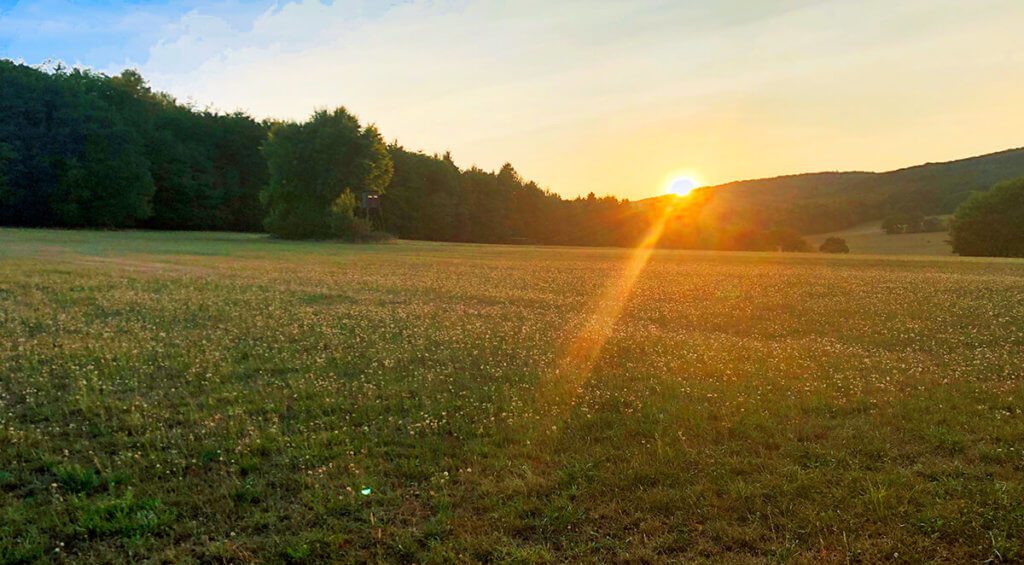 Smart HDR did a good job at this sunset too. At the top left I was even able to restore a bit of sky blue that was actually there. The clouds look like they have been bought in, but they are the original clouds. The meadow and the trees have also been slightly enhanced with the color saturation (Photo: Sir Apfelot). 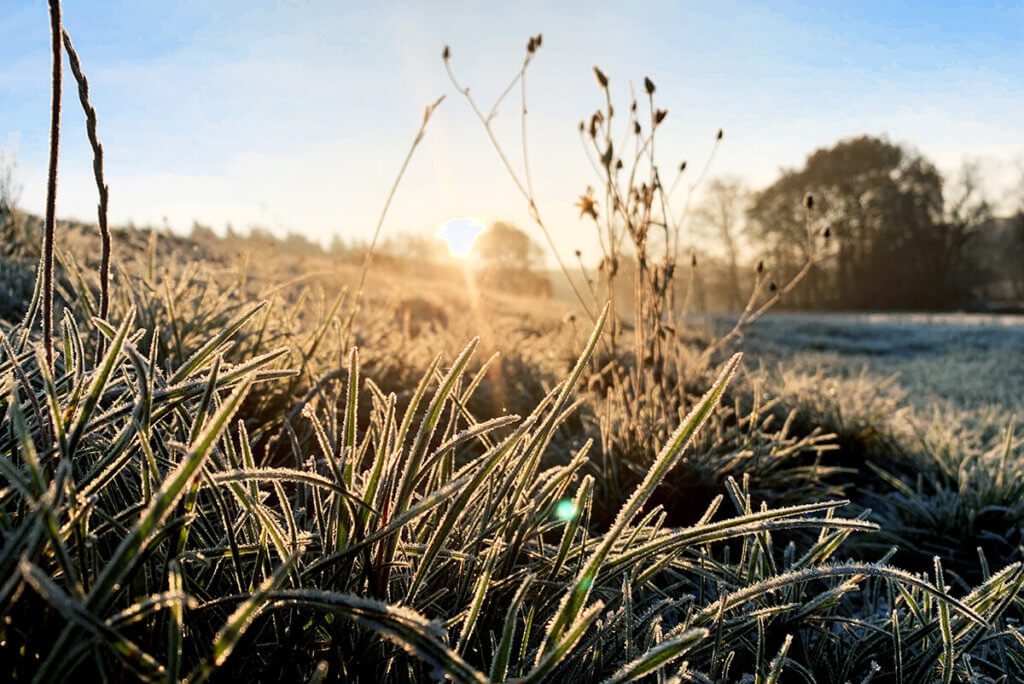 Taking pictures against the sun has been one of my favorite subjects since the iPhone XS. Here it is the hoarfrost grass that makes the photo interesting (Photo: Sir Apfelot). 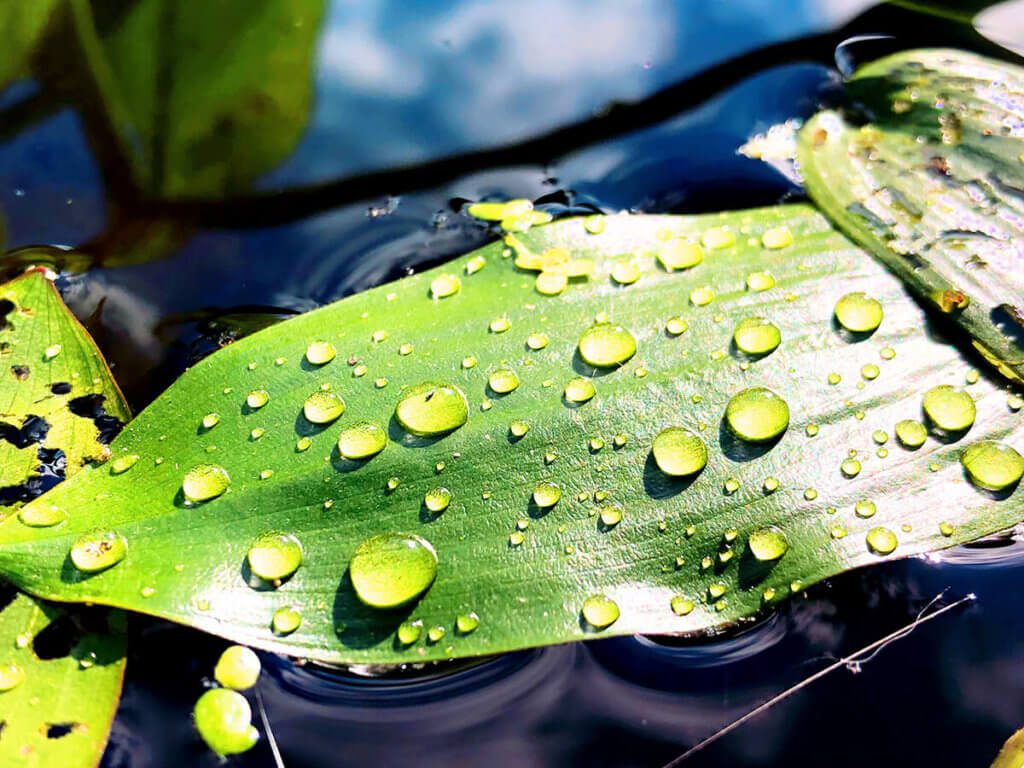 In this photo, I find the water droplets particularly beautiful. Here, too, I turned the colors a little later, so that there is still a nice color contrast between the water and the leaf (Photo: Sir Apfelot). 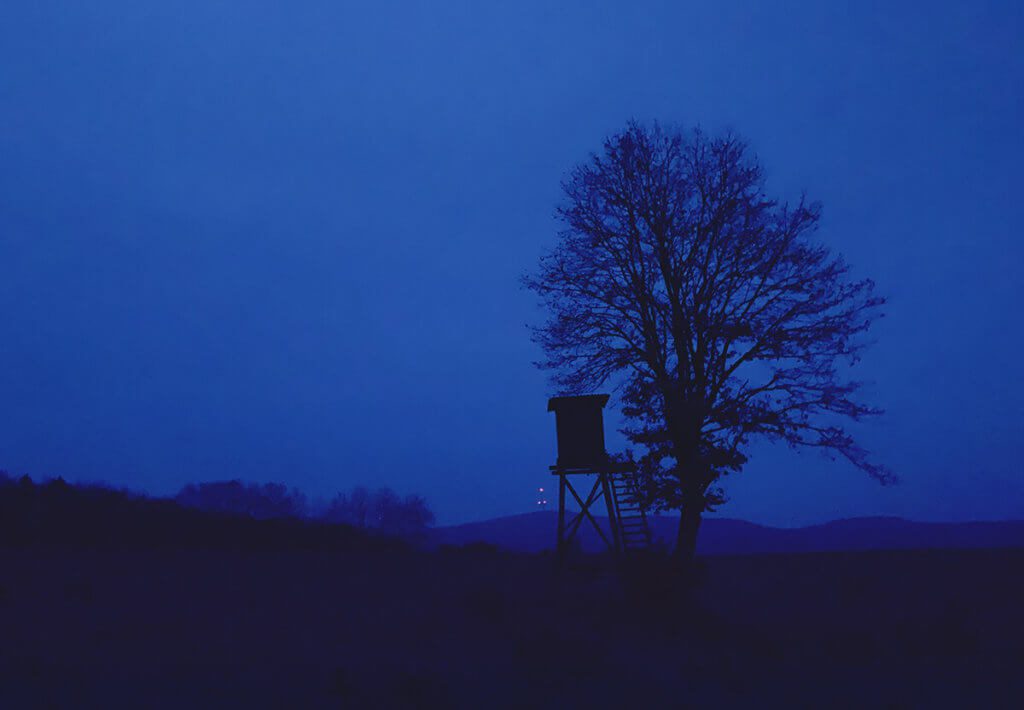 I took this photo while riding a unicycle when it was just getting dark outside. I am surprised that I was able to take photos out of hand and still see details such as the branches of the tree. I subsequently increased the blue. The small orange dots are the lighting of the "Hohes Lohr" radio tower near Battenhausen (Photo: Sir Apfelot). 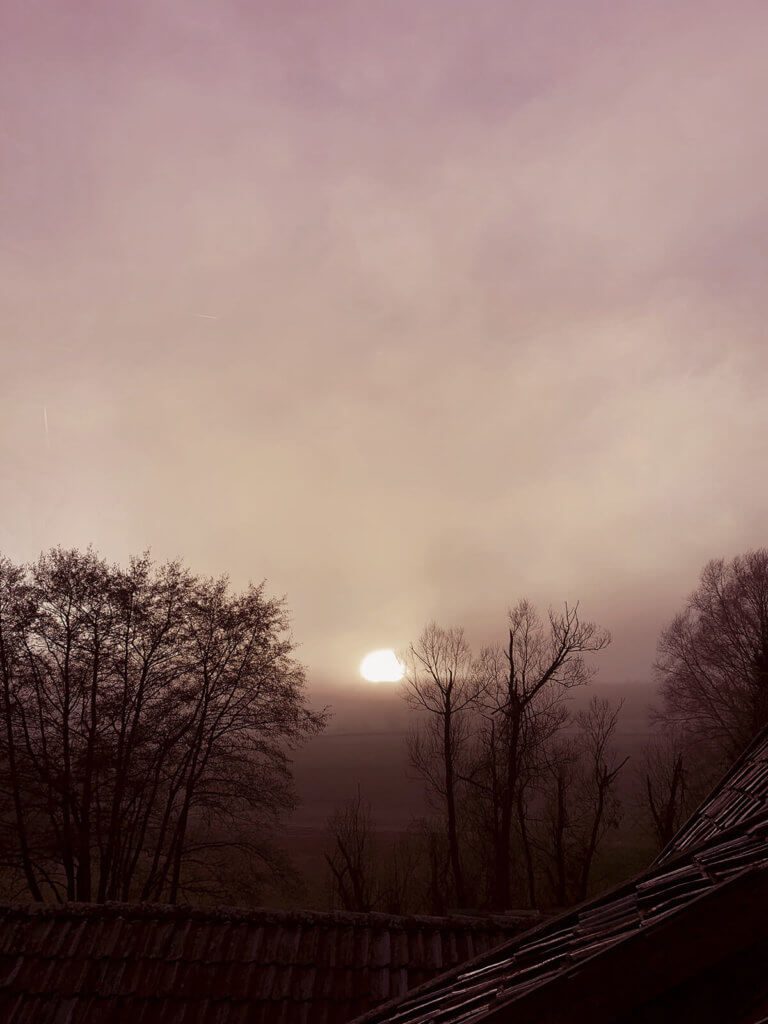 I took this photo spontaneously out of the kitchen window. The sky was impressively beautiful and it comes out very nicely here. The Smart-HDR of the iPhone XS also shows roof tiles in detail in the foreground. Here only the colors have been adjusted a little, nothing else has been changed (Photo: Sir Apfelot).

The following photo may not be a photographic masterpiece, but it is technically impressive: Recently there was a partial lunar eclipse that I wanted to photograph. Since even the 2x telephoto lens of the iPhone XS doesn't get close enough here, I wanted at least the photo to be blurry. For this reason I used the photo tripod for once. As a photo app, I used the "Slow Shutter" app, which allows longer exposure times over several seconds or adjusts them by exposing the photo several times. You can see the result below. I just adjusted the cutout slightly and changed the colors so that it wasn't just gray-blue. If you look closely, you can even see the cut moon. 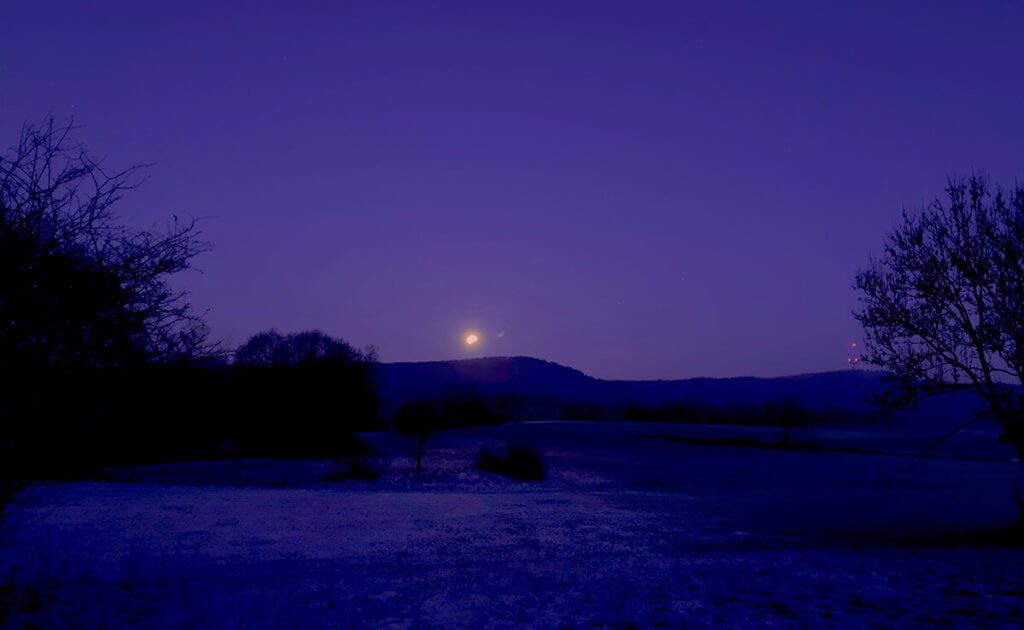 Snapping a partial lunar eclipse with the iPhone sounds almost impossible. You can still try it with the "Slow Shutter" app (Photo: Sir Apfelot).

The following photo is with the Rollei lens ball that I can recommend to anyone who likes to experiment a bit with photography. I've taken quite a few photos with it that didn't look particularly great in the end, but some turned out pretty good for it. 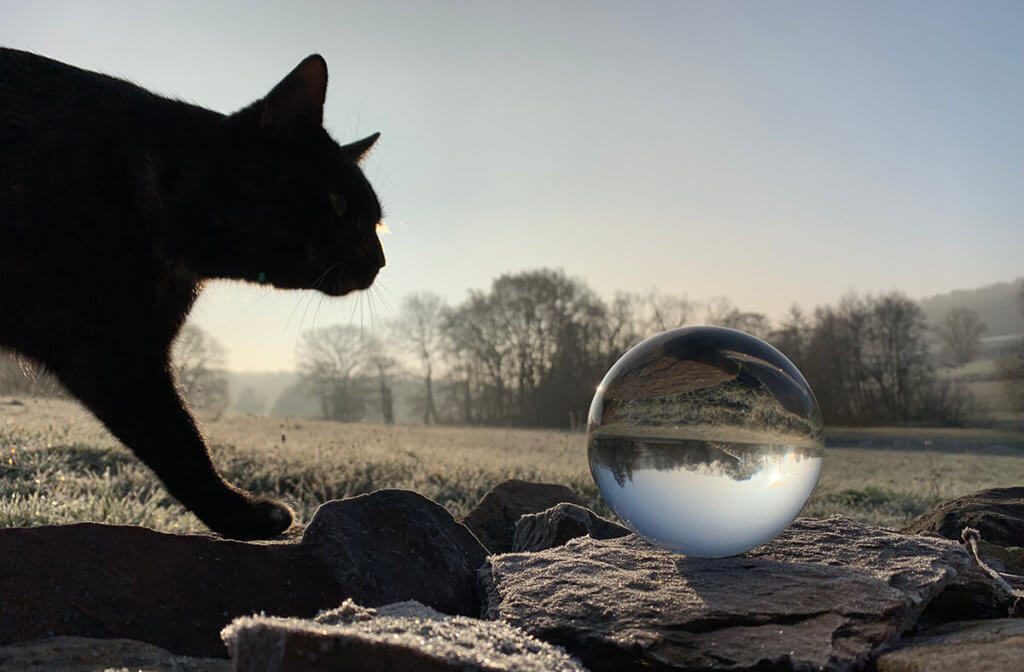 Difficult to plan: unfortunately cats always only do what they want, but sometimes they do the right thing by mistake! (Photo: Sir Apfelot)

I hope you like a photo or two. You are welcome to leave a comment on the pictures or describe your photo experiences with the iPhone XS, XR or XS Max. I'm excited to see what's the next iPhone model in September 2019 for improvements in the camera and internal processing.