Cookbooks for nerds - the best recipes for cooking and baking 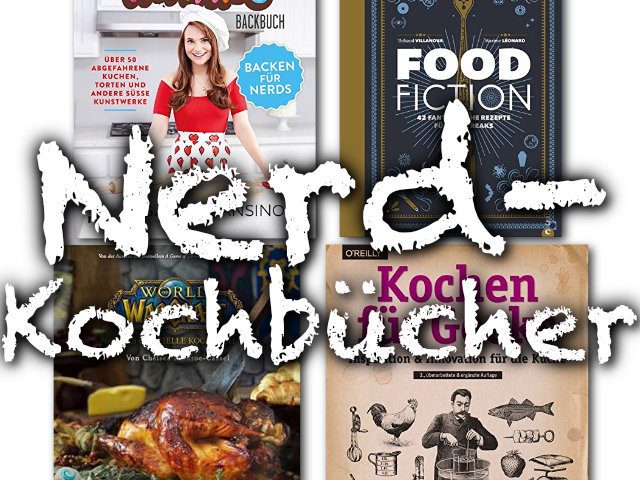 You finally want to find the right nerd cookbook with which you can give someone for Christmas who can't get enough of pop culture, films, series, music, video games or similar subjects? Then you've come to the right place in this guide;) I've picked out various cookbooks for nerds with the best recipes for cooking and baking. From mixed works that cover different topics to recipe books for World of Warcraft or Harry Potter fans, there is a lot included - also one or the other geek cookbook!

The best nerd cookbook or one of the best geek baking books - here you will find the right Christmas present for nerds and geeks so that they can let off steam in the kitchen.

The best nerd cookbook for Christmas

Which is the best nerd cookbook for Christmas depends a lot on the taste (haha, taste ...) of the person receiving the gift. In the following list you will find general cookbooks for nerds and geeks, but also cookbooks and baking books for fans of certain franchises - Harry Potter, Lord of the Rings, Game of Thrones, and so on. But I did pay attention to one thing: That the books I link are also well rated and have positive customer reviews. Have fun browsing, buying and giving gifts! :)

General baking and cookbooks for nerds

"Nerdy Nummies", "Food Fiction", "Cooking for Geeks" (yes, I know there are differences between nerds and geeks, but let's summarize that here ...), "The Geeky Chef Cook Book" and a few other cooking and baking books are not explicitly aimed at fandoms of certain franchises, but rather at the general public. That also makes it a bit easier for gift givers at Christmas. Here is a small selection.

The full title of the cookbook by Thibaud Villanova and Maxime Léonard is “Fantasy Cookbook: Food Fiction. 42 fantastic recipes for film freaks ”. On the Amazon product page you will also find the note in the title of the ad: "From sorcerers' apprentices, comic heroes to space battles, may the culinary art be with you: Menus for nerds and screen fans." - an extensive description for the recipe book with 144 pages. A total of 72% of the buyers gave 5 stars; 14% say they have 4 stars.

Fantasy cookbook
The Fantasy Cookbook brings you or the recipient 42 great recipes to cook at home. Feel free to leave your opinion on the nerd cookbook as a comment!
14,99 EUR
Buy it at Amazon Price includes VAT, plus shipping costs (updated: 14.09.2022 at 07: 56 clock)

From Rosanna Pansino there are 256 pages with the title "The Nerdy-Nummies-Backbuch - Baking for Nerds: Over 50 crazy cakes, pies and other sweet works of art" various ideas from the fields of math & science, space, fantasy & sci-fi , Gaming, technology & web as well as weird delicacies. In addition to ingredients, recipes and baking times, illustrated lists with kitchen tools and equipment are shown so that nerds who are inexperienced in the kitchen can find their way around;) On the Amazon product page you can take a look at the book!

Nerdy Nummies Baking Book
Sweet recipes that lead to delicious baked goods, great pictures and categories as well as a dash of pop culture - what more do you need for a successful nerd baking book?
24,99 EUR
Buy it at Amazon Price includes VAT, plus shipping costs (updated: 14.09.2022 at 07: 56 clock)

Cooking for Geeks: Inspiration & Innovation for the Kitchen

Author Jeff Potter (what a fitting name) brings you with the cookbook "Cooking for Geeks: Inspiration & Innovation for the Kitchen" on 520 pages a wide variety of recipes and cooking ideas. Here, too, you can first get to know the new environment around the worktop, refrigerator and stove in the introductory chapter “Hello, Kitchen!”. The following chapters are called “Smell and Taste”, “Time and Temperature”, “Air and Water”, “Having Fun with Hardware” and “Molecular Games: Chemicals in the Kitchen”. Sounds cool right? Here you can take a look at the book.

27 Reviews
Cooking for geeks
A beautifully designed and well-structured geek cookbook with which you can safely attract boys, girls, men and women interested in the subject from behind the stove and to the stove.
29,90 EUR
Buy it at Amazon Price includes VAT, plus shipping costs (updated: 14.09.2022 at 07: 56 clock)

Not only is the book by Liguori Lecomte the thinnest in this list, but with its title "The Geek Cookbook: Recipes inspired by cult films, TV series and computer games" is not completely thought out. After all, with regard to the categories listed, one would prefer the term nerd rather than geek. On the Amazon product page you will find a few reader photos and the note that the book is not for complete novice cooks. So it may not make the best Christmas gift for kitchen boobs.

The geek cookbook
The geek cookbook is more of the budget model among the cookery and baking books listed here.
8,89 EUR
Buy it at Amazon Price includes VAT, plus shipping costs (updated: 14.09.2022 at 07: 56 clock)

If you can read and understand English or if the nerd person you are receiving is able to speak English, it is also worth taking a look at the Geeky Chef Cookbook (Part 1 and also Part 2). The nerd cookbook “The Geeky Chef Cookbook: Real-Life Recipes for Your Favorite Fantasy Foods” from 2015 and the successor “The Geeky Chef Strikes Back: Even More Unofficial Recipes from Minecraft, Game of Thrones, Harry Potter, Twin Peaks, and More ! ”From 2017 also offer unofficial recipes from the franchises Doctor Who, Game of Thrones, Harry Potter and so on. A look into the book is possible on the respective product page.

In order not to make this guide on nerd cookbooks and geek recipes too long, I have finally summarized simple lists of nerd cookbooks that include different films, series, video games and the like. Just look for the right point and click the links listed. Then you will find the appropriate nerd cookbook for fans of Harry Potter, World of Warcraft, Lord of the Rings and more. At the end there is one more point “mixed stuff” - you will discover even more nerd cookbooks that cater to different target groups.