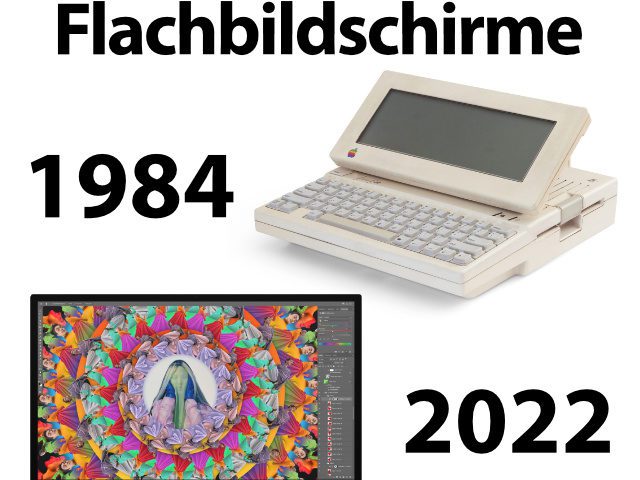 We've highlighted Stephen Hackett's 512Pixels.net blog a couple of times here on the blog, for example in the big contribution to macOS Monterey. Because on the site you will find high-resolution versions of the standard wallpapers from Mac OS X 10.0 to the latest Mac operating system. But Hackett also realizes other Apple-related projects in his blog. The most recent shows the Cupertino originating flat screen monitors, which have been offered by the iPhone manufacturer since the 1980s. Almost 40 years of flat panel, cinema, thunderbolt and studio displays are presented.

In the history of the history of Apple flat displays, we find a wide variety of LCD and LED models from the Apple IIc Flat Panel (1984) to the Studio Display (2022).

What Stephen Hacket has put together is really an impressive collection of data and images. Without further ado, he shows the Apple IIc Flat Panel Display, a 7-inch diagonal LCD screen with 1-bit color selection. The monochrome display was standard back then and therefore okay. The first Apple Studio Display came out in 1998, with its light and colorful design a declaration of war against the tube blocks that were prevalent at the time. The Apple Cinema Display in 1999 must have looked even more futuristic, and its design was carried over to the Studio Displays from 2000 to 2003.

A new era dawned in 2004 when Apple introduced its cinema displays with aluminum frames. Like their predecessors, the flat-screen monitors presented during WWDC 2004 went well with the Mac models available at the time. Brand new: a widescreen display with a 30-inch diagonal. LED models followed from 2008, such as the 24-inch LED cinema display and the further development with 27 inches in 2010. The first Thunderbolt display from Apple followed in 2011 - but still without "Retina' with a resolution of 2.560 x 1.440 pixels.

It then stayed with the Thunderbolt Display and Apple announced in 2016 that it would no longer bring its own monitors onto the market. Instead, the decision was made to cooperate with LG. For example, the 5K models whose monitors were advertised specifically for use with the Mac and sold by Apple in the online store, among others. But apparently Apple wanted to offer more again, especially in the Pro area. Already 2019 came with the new Apple Mac Pro also the outrageously expensive "Apple Pro Display XDR" out. This was followed in March 2022 as an accessory for the new one MacStudio the reissued "Apple StudioDisplay".

Which Apple screens do you (have) use?

It's one thing to show the evolution of Apple screens. But it is another thing to hear and read from users how and where and when they used the individual models. So my question to you is: Have you used one or more of the Apple screens shown in the last 40 years? Was it more of a status symbol for you, a cheap second-hand bargain or the pro gear you needed for your work at the time? Please leave a comment with your experiences!