With the Nebula Solar Anker presented a new, compact projector with 1080p Full HD, HDR10 technology, autofocus and 400 ANSI lumens. Two loudspeakers with 3 watt power each and compatibility with Dolby Digital Plus are integrated in the device. Android TV 9 is used as the operating system, so streaming apps, YouTube, Twitch and Co. can be used directly on the device. In addition, the Google Assistant can be used for control. In addition to the mains-powered model, there is also the projector Nebula Solar Portablewho has installed a battery for the power supply with otherwise the same specs.

The new Nebula Solar (Portable) is a projector from Anker, which offers a full HD picture with up to 120 inches and HDR10 as well as Dolby Digital Plus sound via two 3W loudspeakers. It can also be used as a Bluetooth speaker.

If you want to order the Android TV projector for your home theater, you are bound to be interested in further data on the technical equipment. I have clearly listed these for you in the following list. You can also find more information and details on the Amazon product page. 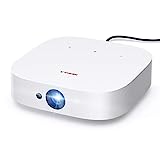 Control of the Nebula projector via the appropriate app

There is the for the Apple iPhone and iPad as well as for Android devices Nebula Connect App, also available as a CapsuleControl is known. The projectors can be operated and search terms entered via the app. Films and series on Netflix, content on YouTube or certain streamers on Twitch can be found more quickly than if you had to enter the letters with a remote control on a keyboard displayed over the projector. Both in the Apple App Store as well as in the Google Play Store the app has a rating of 4,4 out of 5 stars.

An overview of other Nebula projectors