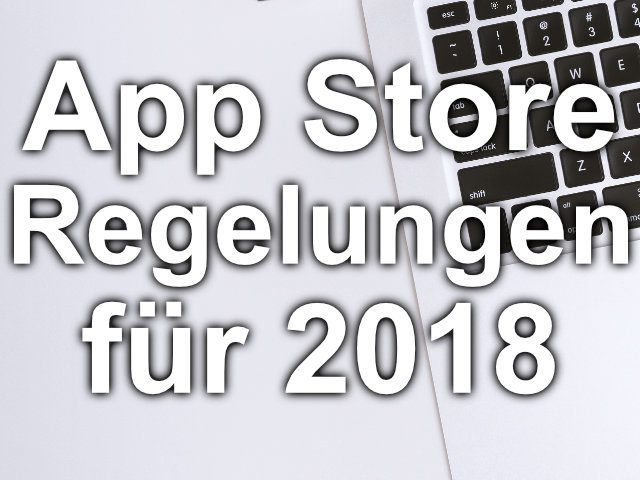 With the turn of the year there are new regulations for developers of apps that are supposed to run on Apple systems. The updated Apple Developer Guidelines for the App Store offer some positive aspects as well as restrictions for developers, but which are intended to give consumers a more positive experience. In the following I have summarized the most important changes / innovations in the Apple App Store rules from 2018.

Anyone who programs an iOS app and makes it available in the App Store for iPhone, iPad and iPod Touch must comply with new rules from 2018. The most important innovations for developers are summarized here.

The modular app regulation is being weakened

Like in mid-December reported here in the blog, Apple wanted rigorously to throw all apps from the store for iOS onto iPhone, iPad and iPod Touch, which were created according to the same modular system. Especially if, for example, only the Facebook page with the contact button, imprint and information about a company was published as its app, these programs should be deleted. Now, due to many complaints from Apple, there is a relenting: Apps based on templates are also allowed, but only if they are brought into the app store from the company's own developer account.

More posts from the blog:

Submit ready-made apps for pre-order only

It sounds a bit absurd, but the Super Mario Run app for the iPhone alone has shown that it works great: iOS apps that you can pre-order as a user must be fully programmed and functional when set up by the developer. Consumers are protected, but developers cannot pre-order before the app is finished. You can then either advertise outside of the app store or only start it when the product is ready and available in the app store. What is more worthwhile individually depends on the type and scope of the app.

Lootbox in-app purchases are only allowed with quotas

If an iOS game contains chargeable loot boxes, i.e. in-app purchases that lead to virtual objects, items and equipment in a random arrangement and quantity, then the odds or probabilities for the individual "wins" must be shown. Other in-app purchases that are reminiscent of competitions or games of chance with an uncertain outcome must also be provided with the respective probabilities. This is basically not new, as online casinos and betting providers also have to show their odds on the net. This serves the player and consumer protection. In the gaming sector, loot boxes are currently more popular than ever, which is why many are calling for Apple to generally ban them in iOS apps.

Crypto trading only with trustworthy apps

With regard to cryptocurrencies, too, the app experience for iPhone, iPad and Co. users should improve from 2018. Because apps that enable the trading and use of Bitcoin, Ether and the like will have to be discontinued by official banks, futures commission merchants (FCM), investment firms or other approved financial institutions in the future. The aim is to make crypto trading safer for Apple users and Debacle like Google Android should not take place (anymore).

VPN apps only with Apple standards and details

If a developer wants to offer an iOS app for a virtual private network (Virtual Private Network, VPN for short), then in the future he will have to use the NEVPNManager API standardized by Apple. In addition, it must be clearly explained which user data is read and collected and what it is used for. VPN apps are also not allowed to violate the laws in the countries of use. If a VPN license is required in a country, this must be noted. Details on this and other regulations can be found in the Apple App Store Guidelines.