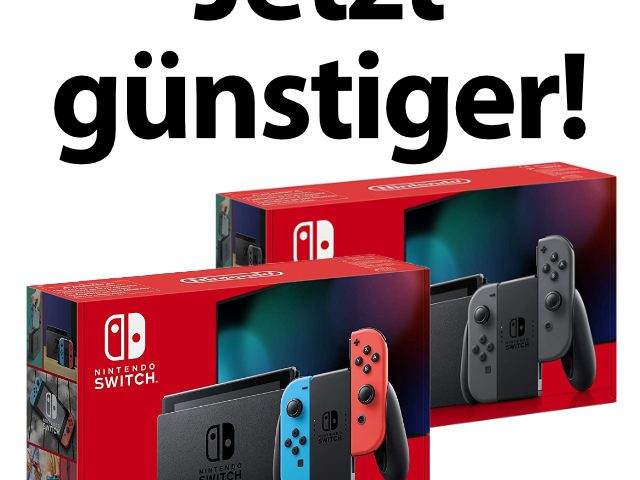 The OLED model of the Nintendo Switch will appear on October 8, and the previous versions have already been made cheaper. Instead of the otherwise required 329 euros, a Nintendo Switch with colorful Joy-Cons now costs 284,90 euros; you can get one with gray Joy-Cons for 299 euros. The new Nintendo Switch with OLED display, on the other hand, will cost 399 euros. If you want to secure the older version of the console (released in 2017, updated in 2019 with a better battery and a small increase in performance), then you can, for example, B. do at Amazon.

The Nintendo Switch, with which you can play the latest video games on the go and at home on TV, is now available at a new low price.

Nintendo Switch: Play video games on the go and on TV

If you visit us often, then you will surely know the Nintendo Switch. It replaced the console flop “Wii U” in 2017 and brought their idea of ​​the gamepad with its own display to a new level. Because the "Switch" is a fully-fledged game console in handheld format that displays numerous games with 720p HD resolution on the go. When plugged into the dock at home, it has a 1080p HD resolution that is transmitted to the television via HDMI. You can now get the revised model from 2019 for less than 300 euros - maybe reserve it as a Christmas present;)

The new Nintendo Switch OLED model was presented in July 2021. At first glance, it looks a lot like the previous version of the console. However, it has a larger display, does not use LCD, but OLED technology and also brings a few other innovations. For example, the internal memory has been increased from 32 GB to 64 GB. In addition, the standing aid on the back of the handheld is now larger and its angle can be adjusted. This makes table mode even more convenient. Furthermore, there is now a LAN connection on the dock so that an adapter no longer has to be used. More details here: Nintendo Switch OLED Model FAQ - 9 Console Questions and Answers.