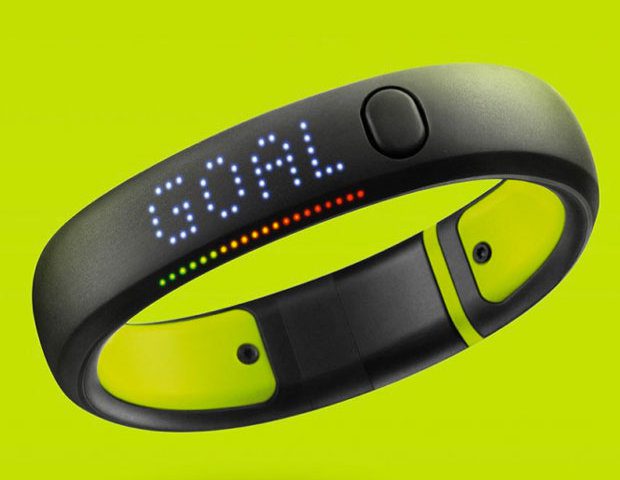 The NIKE + Fuelband SE is Nike's answer to fitness wristbands like [Fitbit One-> fitbit-one], [Jawbone Up-> jawbone-up] or [Withings Pulse-> withings-pulse]. The sporting goods manufacturer is now trying to place a product in the hotly contested fitness tracker market. Indeed, the idea of ​​the bracelet does not sound uninteresting. The [fitness armband-> fitness armband] is black and has some contrasting colored elements. You can choose which color to complement the black: green, orange or pink are available, whereby a completely black band can also be put together for friends of the discreet taste.

The displays of the bracelet

The fitness bracelet has a white display that can show numbers and letters with points of light. There is also a bar of LEDs underneath, which go from yellow to red and can thus display the current progress towards the daily goal. With the help of an ambient light sensor, the Fuelband adapts its display to the surroundings so that you don't shine like a Christmas tree in the cinema in the evening.

Sensors of the Fuelband SE

The heart of the Fuelband SE is a 3-axis motion sensor that records the activity of its user. The aim of the recordings is not to count steps, meters in altitude or distance, but to convert every activity of the user into points. These points - called "Nike Fuel" - can then easily be added up on a daily basis and so you can aim for your daily goal - usually a certain number of points - and easily compare it with other friends. To make the whole thing a little more exciting, there are small hourly competitions and the opportunity to compete with friends using the Nike + app. 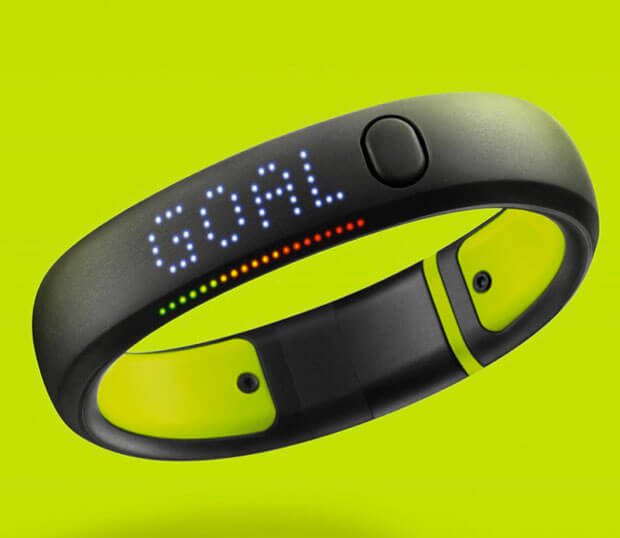 The NIKE + Fuelband SE is the latest version of the fitness tracker (Photo: Nike).

Features of the Fuelband SE

According to Nike, the fuel band is waterproof, but not waterproof. That said, you can sweat it up, leave it on in the shower, and walk in the rain, but Nike doesn't recommend leaving it on while swimming. The Fitbit Flex, on the other hand, is waterproof up to a depth of 10 meters and can also be kept on while swimming. In my opinion, this is a small weak point of the fuel band, because quite a few people go swimming and it is a shame if this activity cannot be recorded. The Jawbone Up is similar to the Fuelband and accepts a shower, but doesn't want to jump into the pool either. However, what the two competitors to the Fuelband SE have in common is the fact that they record the wearer's sleep quality. Everyone has to decide for themselves whether this is important for a fitness (!) Bracelet.

Another special feature of the [fitness tracker-> fitness tracker] is the support of [Bluetooth 4.0 LE-> bluetooth-4-0]. This very energy-saving Bluetooth variant enables the Fuelband SE's battery to last up to 4 days. The bracelet remains in constant contact with the iPhone so that you can follow your progress in "real time" on the Nike + app.

Criticism due to lack of support for Android smartphones

There is some criticism from the Android camp that Nike is very focused on iPhone support. However, this is due to the fact that the iPhone already supports Bluetooth 4 from the iPhone 4s and this Bluetooth version was neglected in Android smartphones. This means that most Android phones do not offer the right basis for the Fuelband SE.

Secrecy about the calculation of points

What is a bit strange about the Fuelband is the fact that NIKE doesn't explain how the bracelet calculates the points. For example, it should also properly calculate the points in sports such as yoga, which is based on slow movements, or when training on the home trainer, where the belt does not move, but NIKE does not reveal how it works. That seems to be a big trade secret of the group.

The Fuelband SE . But I assume that it will also be available via Amazon and other online retailers in the foreseeable future (see below!). Sales start on November 6, 2013. Then it should appear in stores at a price of EUR 139.

Update 07.11.2015: The price of the Nike fitness tracker is around EUR 50. The Nike Fuelband SE is now available at Amazon new and used as well as a refurbished variant, if you are still interested in this model!