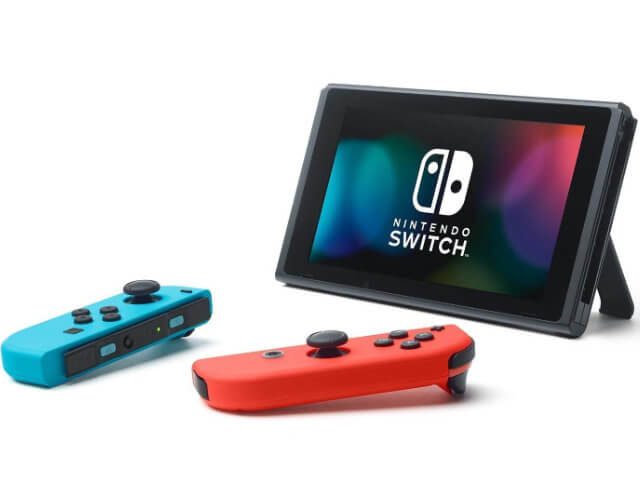 A convenient source of supply for the Nintendo Switch is Amazon. There is not only the hybrid console itself, but also various bundle offers. In this guide I have summarized which switch and game packages are worthwhile and for which titles you should buy the components individually. If you have any more tips and tricks for buying the game console, please leave a comment on the topic;)

Everything about the console: Nintendo Switch - data, pictures and more

The Nintendo Switch at Amazon - available as a pure console in two versions.

If you search for the Nintendo Switch on Amazon, you will find bundles, games and accessories as well as the console as a single offer; or as two individual offers. once with the gray Joy-Cons as an inclusive controller and once with the colored Joy-Consthat look a little more childish. The set with these colored controllers is currently cheaper and therefore the better choice. It is also easier to tell the colored control units apart, which is useful when playing with two people, when attaching them to the left and right of the console and so on. In addition, sooner or later you order the one anyway Pro Controller, which is why the color of the Joy-Cons is ultimately irrelevant;)

Console with colored Joy-Cons
The Nintendo Switch, Amazon offer at a lower price. The game console with docking station, power supply unit, HDMI cable and colored controller units included in the scope of delivery is a little cheaper.
307,38 EUR
Buy it at Amazon Price includes VAT, plus shipping costs (updated: 16.09.2022 at 08: 56 clock)

As a bundle with games and accessories: Buying the Nintendo Switch from Amazon is also possible in this way.

Whether console and single game or special edition with appropriate packaging, enclosed game and other specials - you will be able to find some Nintendo Switch bundles on Amazon. For example the Nintendo Switch with Super Smash Bros. Ultimate including a game and a specially designed console. The offer is there currently for 435 euros. You get the game alone for around 75 euros.

So if you can do without the special design of the console and want to buy it in its pure form and the game in normal edition, then you should put the individual items in the shopping cart separately. This saves you 57 euros. Or: You buy the console and the limited edition of the game including GameCube adapter and controller individually, then you have a similar price, but more accessories and a decent controller;)

Pikachu is cute and cuddly and has been a selling point for games, consoles, films, series, comics and much more for 20 years. With the current Pokémon game “Let's Go, Pikachu!” There is of course another product in the endless series. If you want the full gaming experience, you can use the Nintendo Switch in Pikachu design + game + Pokéball Plus for 419 euros. This is also a Nintendo Switch on Amazon, which is only worthwhile because of the design. Because the hybrid console costs you individually in the shopping cart, the game and the Poké Ball controller together only 393 euros; without the ball only 348 euros. The same goes for “Let's Go, Eevee!”.

Pokémon Eevee Bundle
The Nintendo Switch with Let's Go, Eevee and yellow-brown design for Poké fans. The game console is also included with the Poké Ball controller. The purchase of the individual products is cheaper.
737,19 EUR
Buy it at Amazon Price includes VAT, plus shipping costs (updated: 16.09.2022 at 08: 56 clock)

With the Nintendo Switch, Diablo fans can now play the third part of the series of games on the go - even with a suitably designed console, bag with the same design and all DLCs and other content for the game. The whole thing costs depending on the offer around 373 euros. That can definitely be worthwhile, because the individual Console + single game + this switch bag cost around 374 euros together - and there is no limited design included. So with the Nintendo Switch Bundle with Diablo III: Eternal Collection you get off well and should strike;)

Diablo 3 Bundle
The Nintendo Switch on Amazon with Diablo 3, bag and console in game design and exclusive content. Depending on the bag that you would order for the handheld, the package is definitely worth it.
899,99 EUR
Buy it at Amazon Price includes VAT, plus shipping costs (updated: 16.09.2022 at 08: 56 clock)

Since Fortnite is a free-to-play game and the additional content in this bundle is only cosmetic, I cannot recommend the package to you. In addition, it is currently only offered by resellers at overpriced prices. Therefore, be at this point from the console with Fortnite additions from 423 euros as used goods advised against. In addition, not even the console is specially designed; it is the standard version with the Joy-Cons in red and blue.

If you see a bundle on Amazon, always look critically at the supposed savings price. If you are interested in the special design that fits the respective game or if you want to use this as a price argument for reselling the limited edition in the future, then the price can be worthwhile - but it doesn't have to be. If you are only interested in playing, then it is worthwhile - except perhaps for the Diablo 3 version - to buy the included elements individually. So: Always calculate against the Nintendo Switch on Amazon and see whether packages or individual purchases are more worthwhile;)