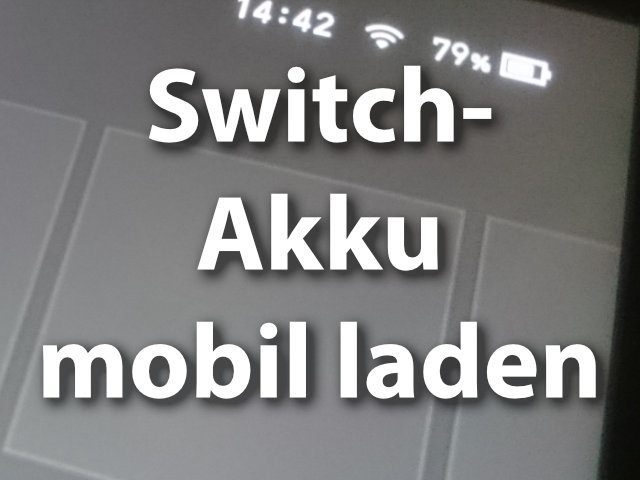 If the Nintendo Switch battery is empty, then you either have to connect the charger to the USB-C port on the underside of the console or place it in the dock. But what if you want to play mobile and the battery is empty on the go? Then a Nintendo Switch battery case or a power bank will help. I researched for you which battery cases and power banks are suitable for the hybrid console from Japan.

If the Nintendo Switch battery is empty on the way, you need a battery case or power bank.

The battery of the Nintendo Switch takes up a very large part of the interior of the console, as is the case with iFixit able to see. The teardown also provides information about the technical data of the lithium-ion battery:

On the back of the console itself there are also references to the electrical input of the Nintendo Switch. The values ​​given are 15V and 2,6A. This means that it can be charged quickly even when playing at the same time. Incidentally, the same information can be found on the original charger. As you have probably already noticed, the values ​​are above the values ​​of 5V and 1A, 2A or even 2,4A that are often common with USB (type A). That's because of that USB-C Power Delivery Standard (PD).

The console can quickly absorb a lot of power. It supports USB Power Delivery (PD) and is charged on the underside via USB-C - both must be observed.

With regard to USB-C, there are a few pointers I want to move forward. For example, USB-C connections and cables are not automatically technical devices with USB 3.1. USB-C only describes the type of connector, not the data transfer or the options for fast charging (Quick Charge or Power Delivery).

So if you see a USB-C port somewhere, then you can safely assume that the USB 2.0 technology is behind it; But only when you look at the technical data will you find out whether it is USB 3.1 Gen 1 (up to 5 Gbit / s) or USB 3.1 Gen 2 (up to 10 Gbit / s). In addition, the connection does not mean power delivery. PD depends on the electricity supplier, i.e. the battery case or power bank, and on the device itself. The Nintendo Switch, however, has a USB-C 3.1 connection with PD.

Now you at least already know which technical details, connections and charging standards you have to pay attention to. Because maybe you have a power bank that even has a type C connection, but only supports the Qualcomm Quick Charge standard. In the following I would like to show you mobile power sources that are suitable for the Nintendo Switch. In this way you can extend the battery life, even if you are on the short-term side of the scale with "Zelda: Breath of the Wild", for example. Incidentally, Nintendo specifies this from 2,5 to 6 hours.

Anker PowerCore + 26.800mAh with PD
The Anker PowerCore + Powerbank with USB Power Delivery not only supports fast charging with the iPhone 8, 8 Plus or X or the Apple MacBook Pro, but also with the Nintendo Switch. One output with 30W and two USB-A outputs with 5V and 3A.
69,99 EUR
Buy it at Amazon Price includes VAT, plus shipping costs (updated: 16.09.2022 at 15: 56 clock)

9 Reviews
iMuto Powerbank with 20.100mAh, PD and QC
The iMuto Powerbank with 20.100mAh supports both USB Power Delivery 2.0 and Quick Charge 2.0. With it, too, many devices can be charged faster from the Apple iPhone via the MacBook Pro with Thunderbolt 3 to Android smartphones, tablets and the Nintendo Switch.
Buy it at Amazon Price includes VAT, plus shipping costs (updated: 15.09.2022 at 17: 36 clock)

And the right cable for it: Auckly 2m Type-C cable

Nintendo Switch Powerbank with clip-on mechanism
This Nintendo Switch power bank / battery case has a capacity of 10.000mAh and a clip-on mechanism for mobile charging or mobile power supply. Other devices can also be charged through the various connections.
Buy it at Amazon Price includes VAT, plus shipping costs (updated: 15.09.2022 at 17: 36 clock)

Joy-Con loader from KINGTOP
Not only the Nintendo Switch, but also its controllers, the Joy-Con units, have rechargeable batteries. If these are to be charged independently of the console on the power supply unit or power bank, then this gadget is the right one.
17,99 EUR
Buy it at Amazon Price includes VAT, plus shipping costs (updated: 15.09.2022 at 17: 36 clock)

The original equipment of the manufacturer charges the Nintendo Switch battery with 15V and 2,6A, i.e. 39W. And that works even when the console is running and playing video games in Full HD 1080p in TV mode. Based on this value, you should also choose chargers, power banks and battery cases for the console. I have shown you a few examples with good technical data and battery capacities in this post. Do you have any hints, comments or device tips? Then leave a comment on the topic;)