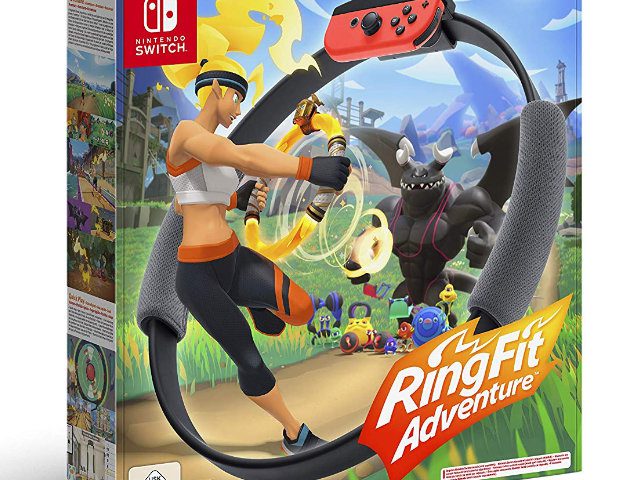 Nintendos comes with an RPG story mode, individual exercises and fun mini-games for social gatherings Ring Fit Adventure für die Nintendo Switch therefore. Similar to the sports title that was also released for Switch Fitness Boxing the newer game uses the Joy-Cons to register movements. The focus is on a ring-shaped operating aid, after which the game is named. So if you have already enjoyed Wii Sports and the many other sports and leisure games for Wii and Wii U, you will certainly like the "Ring Fit" controller and the associated role-playing game.

Nintendo's "Ring Fit Adventure" for the Nintendo Switch brings the Ring-Con and a leg loop into which the Joy-Cons are inserted. Training units are then used to achieve success in RPG games, mini-games and individual exercises. Images: Nintendo / Amazon

"Ring Fit" is basically the name for the new feature that this game will bring to the Switch. The ring into which one of the two Joy-Cons is inserted is aptly called the Ring-Con. Ring Fit Adventure is called the game because it is a virtual adventure in which you can control your character with movements and physical exertion. There are also puzzles, role-play fights and short training units that you can use to get fit. The level of difficulty can be set for every age and every fitness level of the players. More information, offers and pictures can be found on the Amazon product page.

I found some pretty amusing reviews and reviews of the game and controller on YouTube. These give you a much more extensive impression than I can give you with a long text. The first video is the 134th edition of "Game Two"in which the first topic is already Ring Fit.

The second video is also produced by Rocket Beans TV from Hamburg and parodies the format “Beat Yesterday - Aus lazy becomes fit”. It addresses nerd clichés and shows with a wink that video game fans can also train with the new Switch accessories. The title is fitting "Nerd gets fit - Ring Fit Adventure in the practice review".

Another fun review video, but in English, is available from CNET. Here, too, the individual functions and game content are discussed, as well as showing how to use the Ring-Con correctly. The title shows the effort that can be felt while playing: "Nintendo's new Ring Fit Adventure kicked my butt".