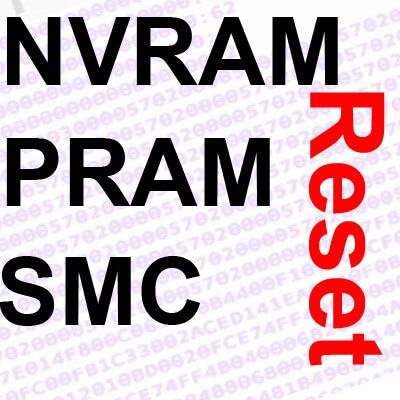 Here you will find instructions for resetting or resetting NVRAM, PRAM and SMC on the Apple Mac or MacBook. Many problems that arise when using the Apple Mac can be solved by resetting these three things. Often there are also reader questions here on the blog, the answer to which lies in resetting NVRAM, PRAM and / or SMC. In addition to the instructions for Do It Yourself, I would also like to briefly explain the individual terms.

Update June 22, 2020: Instructions for the SMC reset on Mac and MacBook with T2 Security Chip (End of update)

Resetting RAM and cache memory as well as the control chip: Instructions for the NVRAM, PRAM and SMC reset can be found here

A brief explanation of terms: What are NVRAM, PRAM and SMC?

Before we get to the reset of NVRAM, PRAM and SMC, let's first clarify the terms. Not every user knows what to do with NVRAM, PRAM and SMC and may therefore shy away from resetting them accordingly. So here is a brief explanation of the three abbreviations for you:

Instructions for NVRAM and PRAM reset: Reset the Mac RAM

Only older Mac models have a PRAM, most newer devices only use NVRAM. Therefore there is only one guide for resetting NVRAM and PRAM. And this is how it works:

There are problems? Trouble shooting during NVRAM reset

It can happen that when resetting the non-volatile random access memory or the parameter random access memory nothing happens and you only get a gray screen. Here it can help to unplug all USB or Thunderbolt devices. Take the peripherals off the Mac (except of course the keyboard, if it's wired) and switch off the Mac (if it doesn't catch itself and remain in its gray shock). Then repeat the above procedure.

Before we get to the System Management Controller Reset ...

Apple thinks that if you have system problems, i.e. if the hardware is crazy, you shouldn't reset the SMC first. Rather, one should end problematic tasks, restart the computer and so on. If that doesn't help or if the problems keep recurring after the restart, then you should consider the following steps. Apple shows no negative consequences of the reset. Therefore you can use it for trouble shooting.

There are different measures to reset the SMC for stationary Apple computers and for various MacBook models. Here I would like to show you the three different approaches. In preparation, the Mac or MacBook must first be shut down (force shutdown if necessary).

There are these differences when resetting:

Indication that the SMC may need to be reset

The subheading and the following list are to be understood as quotations. The source is this Apple support page. Here are the cases listed there in which you can consider an SMC reset to solve the problem:

Were these instructions helpful or missing a detail? Is something unclear or could I help you? Feel free to leave a comment about the reset of NVRAM, PRAM and SMC;)