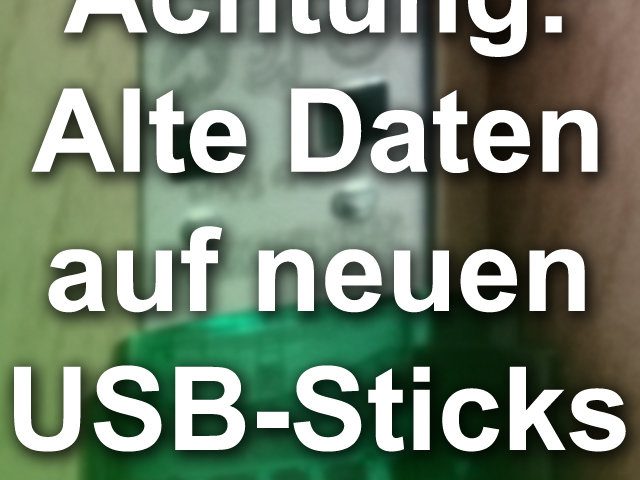 If you buy a new USB stick, there may be leftover data on it that are illegal in an emergency. It may well be that someone has been or will be convicted of illegal material on their USB stick that they did not actually put on it. The reason: USB sticks are often built with memory chips from disused smartphones. These chips must be empty; however, there may still be data fragments and similar remnants of the previous memory consumption on it. Forensic experts can put these digital snippets back together and assign the data of the previous owner of the chip to the current owner. I have summarized for you what can be done about it.

A new USB stick may have leftover data that can be deleted or overwritten.

Don't leave any dubious or embarrassing data behind

The aim here is not to destroy your illegal pictures, videos, texts and other data. The following tips are not intended for this - if you do illegal things, you have to live with the consequences. But I think that some users might leave private or embarrassing recordings or private messages as fragments on the smartphone's memory. So in order to protect your own privacy, you should not only delete your memory and reset the iPhone or Android device before selling it, before returning the smartphone to the recycling cycle, but also have the memory overwritten several times.

Tips for erasing and overwriting the memory of iPhone and iPad can be found here.

Delete the purchased USB stick completely before use

Again, you have several options. Before I get to the point Apps and programs for overwriting the memory in the USB stick, I would like to show you a manual method. Basically, this consists of completely filling the memory of the USB stick, deleting it again, filling it again (down to the last byte and bit) and then deleting it again – et cetera. As a result, data fragments are overwritten and the files you have uploaded and deleted leave behind new, hopefully legal data remnants. Of course, the manufacturers of USB sticks could also overwrite the memory of the old chips from iPhone and Co, but that would be an additional work step that leads to more costs.

Here are a few apps for macOS and Windows that do the multiple overwriting for you to safely erase the stick:

More forensics with Japan as a role model

I became aware of the topic through this article from Deutschlandfunk. In addition to the pure information on the topic, there are also questions and answers regarding illegal data residues on new USB sticks. Among other things, it is worked out that data remnants should not be assigned directly to the current owner of the USB stick, as was previously the case. More extensive forensic investigations are needed. In Japan, for example, meta data would be read out (if possible) in order to determine not only the storage date, but also the serial number of the chip, the smartphone in which it was installed, and thus the previous user. Clouds and other storage facilities could and would then also be examined from this. The future of criminology, so to speak. I can only recommend reading the Deutschlandfunk article.

How do you delete old and new memories?

If you buy or sell a smartphone, if you return an iPhone, iPad or a USB stick to the recycling cycle or if you lend a storage medium - how do you proceed? Do you simply delete your private data via the system's trash can? Do you all let the Gutmann Method shred your traces? Feel free to leave a comment on the topic;)