Mobile online search: BKA is allowed to use “Federal Trojans” for iOS and Android 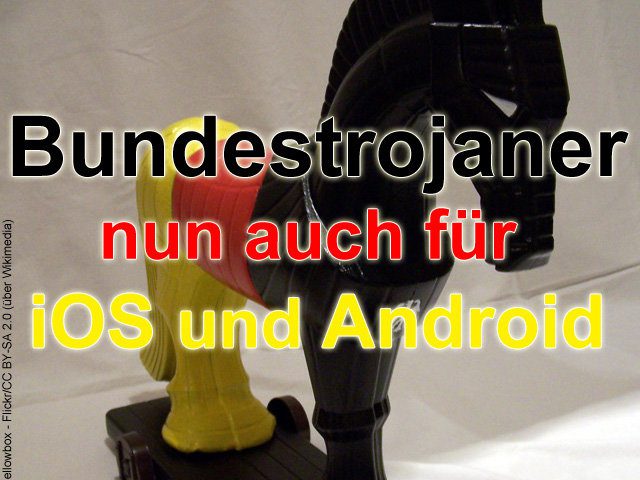 With a new legislative paper on expanded telecommunications surveillance, the Federal Criminal Police Office (BKA) and the police get a more extensive “federal Trojan”, i.e. more rights for them Online search, which should now also be possible with smartphones with iOS or Android. Above all, messengers such as Facebook or apps such as WhatsApp, Threema, Telegram and Co. are of course targeted. The software for mobile eavesdropping was once again not developed in-house, but purchased from private developers - maybe you guys are FinSpy or FinFisher a term.

Online searches (Federal Trojans) now also mobile on iPhone with iOS and Android devices. Not only phone calls, but above all messengers like WhatsApp are targeted.

Lighter and more extensive surveillance by BKA from 2017

This year, the new authorizations for the BKA will be used by the same, among other things Netzpolitik.org citing current legislation and a secret document known. For example, the BKA is no longer only allowed to break into devices and spy out communications about them in the event of international terrorism, but also and above all the police can do this if phone calls are allowed to be eavesdropped. And that happens much more often, "a thousand times“As it says in the linked article.

The state is miles behind private developers

The fact that state affairs and digitization do not always work well and quickly with one another is evident not least from the Internet expansion in rural areas. But that it was developed by the state Remote communication interception software (RCIS) is just on the way from version 1.0 to 2.0 and can only spy on Skype on Windows, is poor compared to systems from private developers.

That is why there is also in the large system, which is widely known as the “Federal Trojan” or “State Trojan” FinSpy - So software not developed directly by the state. According to the Chaos Computer Club (CCC), the software and its developers should only have impeccable approval from dictators. Further information and the "secret document" can be found in the article from Netzpolitik.org.

Another message that I found while researching the topic of Internet politics: Berlin, Brandenburg, Saxony, Saxony-Anhalt and Thuringia - that is, "the East" - should have a joint monitoring center from 2019 onwards. The name Joint competence and service center of the police forces of the states of Berlin, Brandenburg, Saxony, Saxony-Anhalt and Thuringia in the field of telecommunications surveillance is abbreviated as GKDZ.

According to the Message There are privacy concerns on the named site. For example, Thuringia's data protection officer, Lutz Hasse, was critical - while Saxony's Minister of the Interior, Markus Ulbig, signed off on the project with his approval. Moreover, there is also a great deal of ignorance about the whole matter within the parliaments. So there is still a lot of work to be done until 2019.

Tip: CAMSTICKER® put to the test: webcam stickers that can be removed without leaving any residue

Your opinion on the new big federal Trojan

What do you think on the subject - is it justifiable that the BKA and police are allowed to break into the operating system of smartphones and monitor messengers with the permission to tap phone calls? Is everyone even more vulnerable because everyone is using iOS (iPhone, iPad) and / or Android? Feel free to leave a comment on the topic!